Last week, John Kerry made a joke about John McCain’s age, implying that he wears Depends (that is, adult diapers). I have searched everywhere and haven’t been able to find any video of Kerry telling the joke; all the discussions I’ve been able to find of it seem to lead back to an original story at PolitickerMA.com. It brought up something that has bugged me throughout this campaign: the cheap shots about McCain’s age. For example (thanks to Burk for finding me all these images): 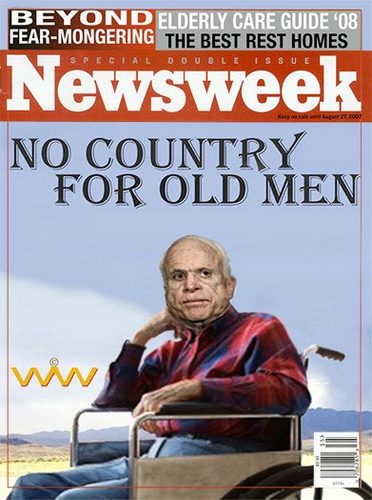 The Baltimore Sun posted this photo and asked readers to provide captions for it: 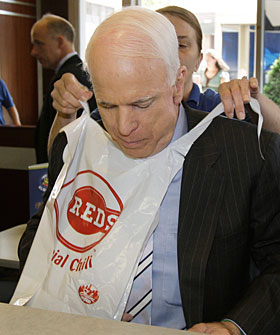 Suggested captions included jabs about Ensure, reaching out to senior citizens, nursing homes, forgetfulness, and so on.

While I’ve heard a lot of people talking about racism in depictions of Barack Obama, and sexism in portrayals of Sarah Palin and Hillary Clinton, I have heard very few people discuss the very negative depictions of the the “old” being used to ridicule McCain. Depictions of older people range from out-of-touch, doddering fools to crazed racists to pathetic invalids. Although Kerry’s joke drew some criticism, jokes or comments about McCain’s age have generally been given a pass–they’ve been declared fair game. You might get in trouble in our culture for being sexist or racist, but apparently ridiculing people for being old is fine.

I don’t know about you, but I know some old people, and they are healthy, coherent, mentally competent people who appear to have complete control of their bladders and bowels. My grandmother is 70 and runs a 110-cow ranch on her own in Oklahoma, doing all of the labor herself (except that she hires someone to come in and bale the hay each year). Just as I thought it must be awful to be an Arab American and hear accusations that Obama is secretly Arab or Muslim used as a slur against him, I’ve wondered how my grandma feels, hearing McCain’s age ridiculed. My guess is that she finds it mortifying, but I haven’t gotten up the courage to ask.

I have also on more than one occasion heard people mock John McCain’s physical appearance, particularly the fact that one side of his face is swollen because he had a patch of skin removed due to skin cancer. The times I overheard this, they weren’t expressing concern that he might have a serious form of cancer that could kill him or force him to leave office; they were just laughing at how he looked.

If McCain showed evidence of dementia or osteoporosis or some other condition that you could maybe directly relate to his age, then ok, fine, I could see people commenting on it. But that’s not what’s going on here. This is just making fun of his age for the sake of it–it’s funny that he’s old, because old people are laughable. It’s an interesting statement about the value we place on older people in this culture.

I think it is interesting because no political party is completely benign and innocent.
I for think older people hold a great deal of wisdom that us youngins can only wait for the passing of time to gain.
Very interesting post.

Thank you! There's been so much attention paid to the discrimination against Barack Obama that no one is talking about how "liberals" or "democrats" are equally implicated in the slur-slinging. I also think its interesting that apparently jokes about Sarah Pain -- the "VPIF" -- are fair game for lefties. Jon Stewart of the Daily Show has been participating in sexualizing Palin, and although its possible it could be tongue-in-cheek, I still find it offensive.

In short, lefties aren't as innocent as they (we?) think.

I don't agree with the tone, but it's not as simple as "I know somebody who's 70 and she's fine". There are a lot of people who are his age and aren't doing so well.

More importantly, the question isn't how McCain is doing today, it's how he will be doing in four years when he's 76 (iirc). He's had some serious health issues. Presidential candidates have traditionally released their medical records, or at least a summary, but McCain hasn't. The most he's allowed is reporters (with no medical background) to look over his medical history once, for an hour. Without taking notes.

How serious is it? I believe somebody has looked at the standard actuarial tables for a man of his age and known medical history and determined that he has a one-in-seven chance of dying in office. That's dying outright -- what are the odds that he'll become unable to fulfill the obligations of the office? One-in-four? Higher?

That's no joking matter, of course, but the issue hasn't been on the table. Yet people are concerned, very concerned, about it, especially the more they get to know Palin. What do you do when you need to talk about something serious but it's not permitted? Easy -- you joke about it. It's a non-threatening way of bringing something up since there's a safe way to deflect it if somebody doesn't want to discuss it. (Dude, that wasn't funny!). I think we're seeing that here.

I know there are concerns about McCain's age (as there were about Reagan's). But I think when you're making a joke about McCain shitting his pants, that's not about trying to indirectly bring up a serious point. The fact that people use humor to bring up concerns doesn't mean that's always what they're doing, and I think in a lot of cases, jokes about McCain's age are just mean-spirited.

I also think it's interesting that we increasingly feel we have the right and ability to judge the soundness of candidates' bodies; I'm guessing FDR (who had polio) and JFK (who had fairly poor health, including high levels of chronic pain) would not be elected or would get criticism that they should step down for the good of the country.

I agree with Chris. I don't feel that it's a matter of "judging the soundness of candidates' bodies," as Gwen says, so much as it's a legitimate concern that the man will die in the oval office.
Although, I understand where Gwen is coming from when she brings up Kenneday and FDR, but I think that most forms of polio and chronic pain are non-fatal. I may be wrong, however- I'm certainly not a medical expert.

I'm not saying that people with disabilities or health issues shouldn't have the same opportunities to become the president as those without- I'm saying it's valid to address McCain's age (although, not necissarily in the ways that it's currently being addressed) when debating his qualifications for the job.

Polio can come back and cause major problems later in life. It's called Post-polio syndrome, it can help further along other health issues and eventually death. Dorothea Lange was a sufferer of it before she died of cancer.

According to the David McCullough biography of Truman, they essentially did elect FDR for his last term knowing that he would die while in office. That's partly why the choice of Truman as VP was such a polarizing decision. But the nomination process was also much different back then; the VP was a compromise candidate between the various factions of the party, not chosen by the presidential candidate.

But that was a very different time, too. We were on the cusp of winning a very important victory in a legitimate war. And in many ways, for all his health problems, Roosevelt represented change much more than, say, Wendell Willkie or Thomas Dewey.

At any rate, some people are legitimately concerned about the possibility of McCain being unable to lead (whether due to death, or other health problems) and see his VP pick as completely inadequate, and might express this through jokes; but my guess is, most people who make jokes about incontinence are just being sophomoric -- and highly disrespectful to the elderly at the same time.

@Steph - I reiterate that slanderous remarks and mean-spirited jokes about Obama have been spread by the candidates themselves (Palin especially) and by officially-sanctioned Republican party operatives. In contrast, jokes about McCain have been spread by private individuals unaffiliated with the campaigns, with Obama and Biden being very respectful of their opponents. That's hardly an equal implication, in my opinion.

Interesting to use the word "mortified" as a possible reaction from a hale and industrious 70-year old.

Awesome! I applaud the original poster for finally saying something!

Just like it's not fair to take cheap shots at someone for being a certain sex or race, it's not fair to be making jokes about McCain's age. It's legitimate to discuss it in the context of how it may affect his ability to serve as president, or the possibility of his death. When people discuss it *in that context* I don't have has much of a problem with. But joking about incontinence, the photoshopped image of McCain in a wheelchair, etc... it's just as humiliating and not any better than a racist slur at Obama. And I'm glad someone finally said it.

I'm as much of a liberal as many of us who read this blog probably are, but that doesn't mean that we can compromise our ideals when it comes to the "other" candidate. We judge people by what they say and what they do, not by whether they happen to be a man, a woman, black, white, young, or old. Thank you, Gwen!

Thanks to everyone for the clarification on FDR's last term and the potential risk and lethality of polio. You learn something new every day!

Sexism and racism are seen as unlawful discrimination. Age-based discrimination is legal and is given a pass, so do age-based criticisms.

[...] portrayals in a way that teens aren’t. This doesn’t mean that older people don’t get mocked (especially in TV shows and movies), but that a company is likely to be much more afraid of [...]