Seemingly just seconds after the news leaked this weekend that current Alaskan governor Sarah Palin was McCain’s pick for vice president, merchandise appeared to capitalize on her conformity to current white bourgeois beauty standards. [Thanks to Shakesville’s Sarah Palin Sexism Watch for alerting me to the existence of this stuff.]

For example, I found this bumper sticker on zazzle.com, a site where users can upload their own images for use on T-shirts, stickers, baseball caps, etc. The caption above the sticker says, “This year, vote for HOT!” See screengrab below.

This [and the many other examples that I’m sure will be added to this post] would be useful in an ongoing discussion about the deployment of gender in this year’s presidential elections, especially comparing/contrasting the popular portrayals of Hillary Clinton with those of Sarah Palin.

The AFP disembodies Palin in a “news photo” published on September 1. When body parts of male candidates are shown, they are identified as, for example, “the hand of Candidate X was seen waving.” However, in this example, Palin is identified as her legs. [Again, hat tip to Shakesville for photo and commentary.] 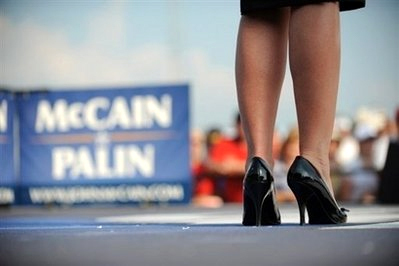 Dubi K. sent us the following picture that has been making the round on the Internet [it is reportedly the icon for a Facebook group called “I’d Bang Sarah Palin!”]. It is a manipulation of a photo of a woman in a bikini with a gun. Palin’s head is superimposed on the woman’s body. Snopes, clearinghouse on Internet memes and urban legends, summarily debunks the picture’s supposed authenticity and supplies simiilar examples. 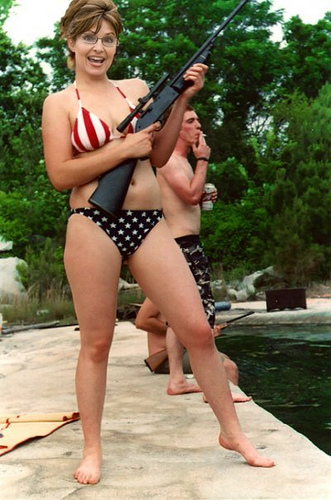 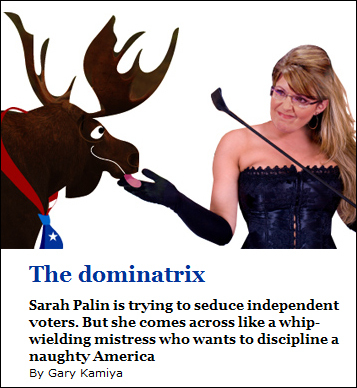 Salon advertises editorial about Palin with image of her as a moose-dominating sex worker.

Laura C. sent in a link to this image (found at Carrion Bag) of Palin supporters: 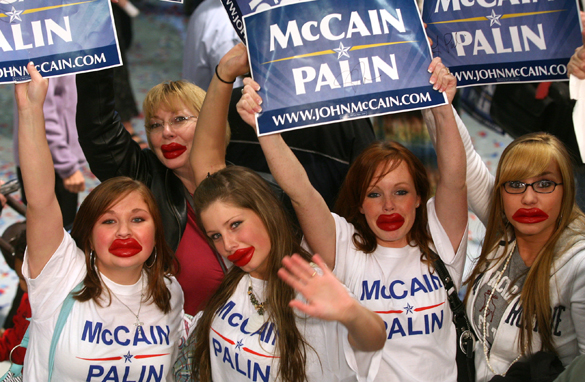 Might be good for a discussion of the ways in which sexualization of Palin is coming from both opponents (see here) and supporters, and the ways that women may actively take part in sexualization that trivializes women as a group.

Finally, there are now action figures of Sarah Palin. The one below is the “Sarah Palin School Girl Action Figure.” Setting aside how I feel about Sarah Palin personally and politically, I hate to see a woman’s political power attributed to how sexy she might be. There are already dozens of groups on Facebook about how “sexy” or “hot” Palin is, and they have thousands of members. 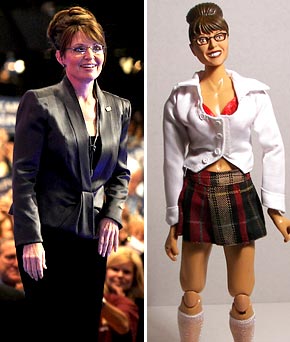 They'll have to change it to GILF soon.

I came across VPILF; someone has already set up a web site for it: http://www.vpilf.com/.

A few hours ago I was wandering around and found on Google trends that one of the top 25 searches today was ... Sarah Palin Hot Photos and farther down the list something about her in a bikini.

Get a load of this one:

[...] is the temptation to denigrate her with sexism.  (This might seem ironic, except leftist cannibalization is ubiqiutious.)  I am seeing, however, [...]

[...] discuss the election or criticize Palin without it having to involve sexualizing her? See here and here for evidence that no, apparently there [...]

[...] added several images to this post about the media’s sexualization of Republican VP candidate Sarah Palin, as well as another [...]

The Hustler founder and freedom of speech advocate has produced an X-rated movie using an adult-film actress who resembles the Republican vice presidential candidate.

Flynt's producers posted an anonymous help-wanted ad on Craigslist in L.A. just days after the Republican convention. "Looking for a Sarah Palin look-alike," read the ad, "for an adult film to be shot in the next 10 days." The actress would be paid $3,000 for the part, said the ad.

Gov. Palin's spokesman could not be reached by deadline.

[...] was going to add these images to an older post that contained an image of a Sarah Palin action figure, but while I was searching around, for an image of her, I came upon this demonstration of [...]

I wish she would get elected then we might be able to have electronic gambling again.
Basketball wagers hit over 100k this year
100k football last year
Made over 100k on baseball this year

[...] JFK for the same. It’s because Jackie O. was a Stepford wife and Hillary wasn’t. The media sexualized her. She had nothing to do with it. I ignored Regressive media last year and know she [...]

[...] posts about the sexualization of Sarah Palin (as well as other female politicians) (see here, here, here, and here), but I thought these photos were worthy of their own post. In addition to the [...]

This Post is (Not) About Contraceptives, Congressional Hearings, and/or Colossal Idiots With Names That End in -imbaugh. Or that thing that happened at BYU. « theladymo — March 13, 2012

[...] sexuality as a reason to not consider the words that are coming out of her mouth,” see here, here, and  especially [...]

[...] you don’t get to where she is politically and be governor of a state by being dumb. She was sexualized in photoshopped images and millions today still believe she said she could see Russia from her [...]

Palin provocative for all the wrong reasons « stromannd — September 21, 2012

[...] mate in presidency campaign, a decision that pushed Palin into the spotlight for being too sexy. An Alaskan native, Palin would have been the first female vice president and with her addition to [...]

[…] into the spotlight, Sarah Palin has come under scrutiny both well-articulated and insulting, with much conversation surrounding her appearance.  Representative Sensenbrenner’s 2011 comments on Michelle Obama’s butt.  And in […]