In her book, The Averaged Americans, Sarah Igo talks about the development of statistical methods.  Their development allowed for the emergence of the idea of an “average American.”  An idea that carried moral weight; “average” was “good.”

Looking at the famous “Middletown” study, the Kinsey Reports, and the invention of polling, she discusses how methods aimed at identifying the average Amerian often reproduced preconceived notions of who was a real American.  In the Middletown study, Blacks were ignored because the researchers decided they didn’t count as average Americans.  Similarly, polling methodology is aimed at getting a representative sample, but representative of who?  Deciding who is being over- or under-represented in a sampling strategy is always a choice. 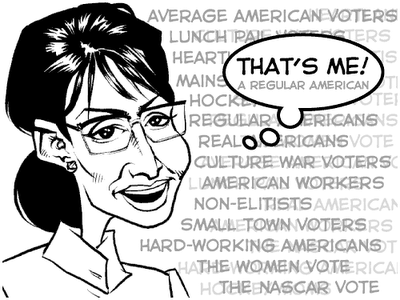 As with Middletown, the idea of the average American used by McCain/Palin is still racially-coded.  We Are Respectable Negroes lists 69 terms–including “regular folks,” “responsible Americans,” and “good hard-working people”–used by speakers in this election to mean middle-class white person.  Here are Palin’s words:

Which brings me to Joe the Plumber.  Joe the Plumber, of course, is supposed to represent an “average” American.  But every in-group needs an out-group and, like all incarnations of the average, Joe has to be differentiated from the extremes, the non-average, the tails of the distribution: the blacks, the traitors, the poor, the Muslims, etc.  Here he is making exactly such an argument about Obama:

This is really good stuff. I've been tracking this during the election and have to say I'm most worried about Nov. 5th. What happens after Obama is elected? I doubt these people are just going to drop the race card, stop calling Obama a Muslim and get ready to 'work for change.'

I've been blogging about my recent experiences campaigning in Ohio too. It's crazy what you see in the average front yard sometimes: http://partisanscreammachine.blogspot.com

[...] whiteness of the White House. We discussed the resemblance between Obama and his Grandfather and the meaning of “Main Street” to illustrate the social construction of race.  And we offered examples of white privilege: in one [...]

Sociological Images » Excluding Blacks From The National Collective — May 14, 2009

[...] see an earlier post on this subject with some really great material and this post on whether Chinese Americans are real Americans. [...]