I just saw a story about this image on “Countdown with Keith Olbermann” (image found here):

It is a “joke” included in the “October newsletter by the Chaffey Community Republican Women, Federated” (I read more about it here; the group is from San Bernardino, CA), in which they claim that if Obama wins, his face will be on food stamps, not dollar bills. From a story in The Press-Enterprise:

Fedele [the group’s president] said she got the illustration in a number of chain e-mails and decided to reprint it for her members in the Trumpeter newsletter because she was offended that Obama would draw attention to his own race. She declined to say who sent her the e-mails with the illustration. She said she doesn’t think in racist terms, pointing out she once supported Republican Alan Keyes, an African-American who previously ran for president. “I didn’t see it the way that it’s being taken. I never connected,” she said. “It was just food to me. It didn’t mean anything else.”

Uh huh. Right. Who could possibly have known that African Americans were historically portrayed in racist carictures eating fried chicken, ribs, and/or watermelon, or that there’s a long-standing political tradition of trying to connect Blacks and welfare in the public mind?

Honestly, it’s been awhile since an image of Obama actually made me gasp, but that one did.

UPDATE: Larry, from the L.A. Times‘ Daily Mirror blog, sent in a link to this post at the blog Please God No, in which the author claims to be the creator of the Obama bucks cartoon and says,

It was a satirical look at some of the Fox News watching right-wingers out there that are afraid of a government that sponsors welfare type programs. It was intended to poke fun at the unrealistic fears and agenda of racism that a fringe element of Republicans strongly embrace.

This “cartoon” (as described in the media), was meant to empower African Americans to stand up for and defend themselves against racial intolerance. This “cartoon” was prescribed to showcase the racial hatred and intolerance towards the “left” and it’s liberal “welfare” economic plan. Guess what? The radical right picked up this fumble and ran with it right into the opponents goal line. The fact that a website like this exists is not evidence of racial hatred or divide, but the fact that an image taken from this website was used in a legitimate publication to promote the Conservative agenda must be proof of either existing racism or utter stupidity.

I thought the author’s response might be interesting for a discussion of political parody and humor and the limits of satire. What makes political humor effective and what makes it, as in this case, actually appeal to the group the humorist claimed to be mocking? If people miss the satire, is that because they’re dumb or because the satire isn’t that good? If someone says they’re being satirical, does that automatically shield them from any accusations of sexism, racism, etc.? I really find the issue of humor to be fascinating–what we find funny, what happens when some groups don’t recognize what another group claims was an attempt to be humorous, and how claims of being satirical or “just joking” can be used to avoid responsibility for the content of statements or images. This seems like a particularly good example of some of those issues.

Dara G. sent in a link to this billboard in West Plains, Missouri, featuring a caricature of Obama in a turban meant to imply he’s an Arab/Muslim (found here): 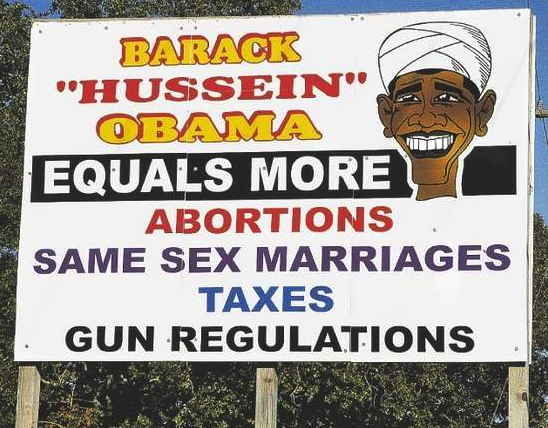 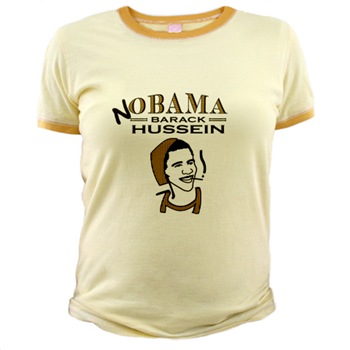 For other examples of accusations that Obama is Arab/Muslim (and that that is bad), see here, here, here, and here. For a non-racist caricature of Obama (showing it can, indeed, be done), see this post.

And I just saw on Rachel Maddow’s show that this image showed up briefly on the Sacramento County Republican Party’s website (image found here): 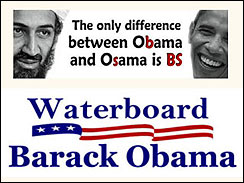 This image is from a recent rally (found here): 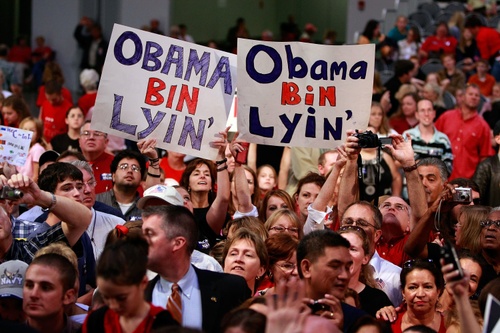 And, if you haven’t seen it yet, here is the by-now-classic video of supporters of a McCain rally yelling that Obama is a “terrorist” bound on spreading “terror” (found here):

I presume you can figure out for yourself how these might be used in classes. Negative messages about Arabs/Muslims, attempts to use fear of the connection between Arabs and terrorism, joking about torture, racist imagery, etc. etc….You don’t need me for this one.

To be fair, McCain, in at least one instance, has been attempting to temper this fervor. But, as Gwen mentioned in a previous post, those who stir up hatred often have a difficult time controlling it. I’d love to have some social psychologists weigh in on the phenomenon.

NEW! Man in Ohio hangs Obama from a tree in his front yard and boldly claims racist motivation (found here):

Recently, I was driving with my sister when we came upon a house that had a sign hanging in the air reading "Obama is a terroist." Yes, it said terroist, not terrorist. My sister ran out of the car to take a picture of the sign, when the man sitting out front yelled, "Leave my sign alone before I kill you." Needless to say, she ran back to the car.

Perez Hilton of perezhilton.com has posted some videos about how Barack Obama is seen- one where a Curious George monkey with Obama on its forehead, and another at a small convention in Ohio, I believe, where people stated they were against Obama because they were scared that "the blacks would take over", his connection to terrorism, and how he would equal more abortions.

The level of paranoia and delusion in these images is truly scary. It's alright with me to disagree with any candidate (although I am also starting to believe that those who support Palin are deeply anti-American, but that's neither here nor there), but these are just insane.

Some commenters have suggested that attacks from the left are just as bad. I'd like to stress that in no county has an official Democratic Party website suggested that it would be acceptable to waterboard anybody.

"Who could possibly have known that African Americans were historically portrayed in racist carictures eating fried chicken, ribs, and/or watermelon, or that there’s a long-standing political tradition of trying to connect Blacks and welfare in the public mind?"

I didn't know the racist association of black people with fried chicken, ribs, and watermelon until I was an adult. The kind of racism I grew up around largely reflected the races that I grew up around: Asian-American and Latino. It took moving to an area of the country with a lot more Black people for me to learn that.

That said, I don't think this excuses it at all. Ignorance is never an excuse, and the stereotypical association of Black people with welfare is everywhere, as far as I know.

thewhatifgirl--great point about how racist stereotypes/prejudices might be regionally specific (though some, like the connection between welfare and Blacks, is fairly national). Now that I think about it, it wasn't until I moved to Utah and then Las Vegas that I started learning some of the things stereotypically associated with Pacific Islander or Hawaiian culture (I had never lived anywhere with a significant Pacific Islander population before).

But even if the woman had no idea that the foods had stereotypes associated with them...just the "Obama bucks" idea is pretty messed up.

wtf?? did anyone else notice the STAR OF DAVID in marker on the ghost's head??? not that im surprised that someone who hates blacks and muslims also hates jews- we have the same enemy :/

[...] and communists, a terrorist, a terrorist again, and a “half-breed Muslin.”  See here for other racist anti-Obama propaganda.  Gwen asked “So what if Obama is an Arab?”  [...]

Ignorance And Bigotry « The Sound of the Noising Machine — November 9, 2008

I think the more you bash obama the better. No one got up set over cartoons like lil bush and the other left wing crap that he took. and if you think the obama bill was funny check out my video. Its called "Obama chicken fried" on http://www.youtube.com/watch?v=vCRF6TdHO6I