I just saw one of these signs in my neighbors’ yard (image found here): 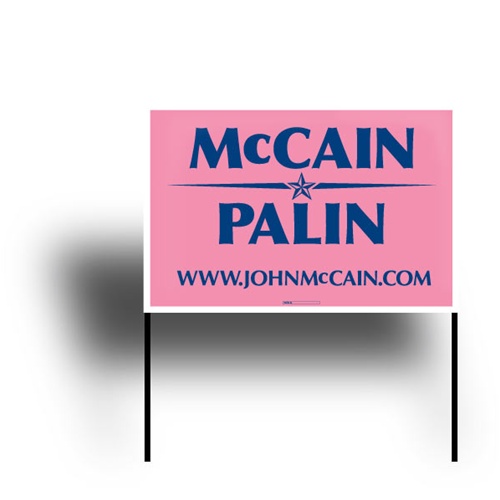 The reason it struck me is that a) I’m quite certain it’s the first time I’ve ever seen a pink campaign sign and b) it made me remember the criticisms of the Kerry/Edwards yard signs from the 2004 campaign (see this post). The Democratic candidates’ signs were described as lacking confidence, whereas the Republicans’ logo exuded masculinity and assertiveness, which supposedly reinforced stereotypes of Democrats as weak and uncertain and Republicans as aggressive and strong. It’s a sign of the many unexpected events of this campaign season that just four years later Republicans would feel comfortable putting out a pink yard sign because they’re actively playing up the femininity of one of the candidates. It’s not just that they’re emphasizing that she’s female; I’m pretty sure if Hillary Clinton had won the Democratic nomination, she wouldn’t have pink yard signs. I have a feeling that the Democrats, facing the stereotype that they’re weak and uncertain, wouldn’t want to take the chance of having yard signs in a color associated with femininity, even if they had a female candidate, but that’s just a hunch.

charity and advocacy come to mind as well. pink seems synonymous with fighting cancer at the moment. i wonder if that was part of the psychology.

The breast cancer campaign comes strongly to my mind, as well, but connotes different things to me: emotional manipulation, compulsory femininity, infantilization of women, and the homogenization of all possible experiences of being a woman.

My initial reaction was relief that I don't support the McCain/Palin ticket, and thus don't have to decide if I want that on my front lawn. But upon reflection, one of the (many) reasons I don't support the McCain/Palin ticket is because Palin's approach to being a woman connotes to me many of the same things that the incessant pinkness of the breast cancer campaign connotes to me. So I suppose that pink was a very apt choice. :-/

I haven't seen the pink ones, but I've seen blue ones around, and what struck me as odd is how very similar both parties' signs look this election. They are both blue with white block letters and even though Obama's has his logo thingy on it, those are fairly hard for me to discern from a moving car.

I'm surprised they haven't slipped up yet and called Obama a "surrender monkey."

[...] gender politics of this election. We discussed the mothering of baby Trig, conservative feminism, the politics of pink, and took a humorous look at the women’s vote with Sarah [...]

Every now and then, I see an instance of men/masculine entities "doing femininity" to some extent--young men in pink polo shirts are a good example--and wonder if it's the beginning of a very, very slow sea change . . . The very idea that bringing a woman onto your ticket, in and of itself, could be a political advantage, is amazing to me.

Of course, there's a lot going on here, so maybe I shouldn't go about declaring a victory for feminism just yet, but I can't help thinking that as women and men get closer and closer to equality, the feminine is less and less devalued.

I think this is the exact opposite of what they really need. ,

In the decline of civilization, communities do not go down by the same path by which they came up. ,