Breck sent in a link to this post about the controversial New Yorker front cover depicting Barack and Michelle Obama as Muslim extremists (I found the full-size image here): 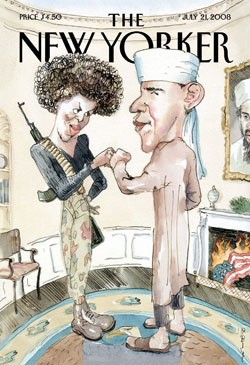 As you may guess, there have been some quite negative reactions to this cartoon. The Obama campaign did not particularly like having him portrayed as an American flag-burning Muslim, oddly enough. And apparently this has gotten wide enough press coverage that even my mom had heard about it and was distressed, and my mom doesn’t follow politics too closely.

I’m kind of fascinated by this entire situation. When I went to Oklahoma last month to visit my family, my uncle informed me that Obama is a Muslim with some secret evil motive for wanting to be president that the rest of us can’t even imagine because we aren’t diabolical enough to think of it. When I pointed out that Obama is not a Muslim, my uncle said he used to be, which is the same thing, and that if Obama really loved America he would change his middle name from Hussein. I gave up on the conversation at that point and returned to pulling ticks off the dog, since that was a lot more pleasant.

What I’m saying is, I have first-hand knowledge of the people out there who honestly believe Obama is some type of Muslim extremist with an evil plot for when he gets into office. Fox News reported on the “fist bump” as a possible terrorist gesture. This distrust of Obama is out there. So this cartoon could spark a really interesting discussion of political humor/satire and the boundaries between “appropriate” and “inappropriate.” I assume–and I’m just assuming here–that this cover was supposed to be a commentary on the fact that some people (and Fox News) are convinced Obama has a connection to Muslims and/or terrorists and, as a result, has evil plans for the future of America. But the cover could also simply reinforce those ideas–I really hope my uncle doesn’t suddenly take up reading and pass by a magazine rack in the near future, because this cover will prove to him that he’s been right all along. So what’s the line between social commentary that points out and/or ridicules issues such as these and just reinforcing the misconceptions or stereotypes that you claim to be undermining?

It could also be used for a discussion of how we read things into images based on our own assumptions. I mean, I have no evidence this cover is supposed to be a commentary (however misguided, dumb, or inappropriate it might be) on misconceptions about Obama; I’m just presuming based on what I know about The New Yorker, its liberal slant, and my recent experience with my uncle. If you showed me the exact same image and told me it came from Fox News, I am certain my reaction would be different because of my assumptions about what Fox News would be trying to say with the image. I can check that tendency to make assumptions about the intention of the creators of an image, and I try to, but I think it’s always good to point out to students that we don’t just passively see an image; our own experiences, assumptions, and so on influence how we interpret them. This is part of the reason that, once an image is put out there, the intention of the creator doesn’t necessarily have much to do with how people interpret or use it.

On an unrelated note: If you’ve noticed my absence from posting the last few days, I can only say that the first 2 seasons of “Buffy the Vampire Slayer” turned out to be way more compelling than I was expecting and watching them can be quite the time sucker.

1) The artist and editors all say it's satire and a send-up of the right's misconceptions about the Obamas.

2) As with all satire, no matter how controversial the subject matter or handling of it, one rule always holds true: If it were funny, I wouldn't be offended.

I'm going to have to disagree with you, Breck on one point:
As with all satire, no matter how controversial the subject matter or handling of it, one rule always holds true: If it were funny, I wouldn’t be offended.
Perhaps this holds true for you, but not for everyone. Satire does not always need to be funny to everyone for it to be satire.

I think this cover has been widely misunderstood.

I honestly think you underestimate the intelligence of the American people -- and for that matter, the readers of the New Yorker, who we all know have historically been the least educated among us...*satire, fyi*

The point is this: I doubt that Mr. Obama had much of a chance with the much coveted Oklahoma-crazyies vote to begin with, and this article is a direct joke on that group. Moreover, by presenting these images, which continue to be in the subsurface so flagrantly, by bringing them out into the open, it opens a much needed dialogue on how these images have been used.

Moreover, I think its exceptionally interesting how these images have "broken through the surface": passive hints from the Hilary campaign, the talking heads of the Fox News channel and so on.

This had to happen I think or the dialogue itself would not have taken place.

Likewise, I don't particularly care if its funny or not, I don't think that's an adequate evaluation at all. Frankly, I think that misses the point.

I think the clincher for it being satire is the US flag burning in the hearth. Besides all of that, it is possibly the worst cover of New Yorker magazine I've ever seen.

Of course, it is partially wrong -- Obama is a Muslim terrorist only when he's not busy being an elitist Ivy League snob completely out of touch with the American public who eats exotic, expensive delicacies like arugula...

Who cares if the Obamas are offended?

I'm sure the Clintons and Bushes are offended when satire is either directly or indirectly targeted toward them.

Give me a break.

Also, I've just read up on the supposed Fox New terrorist-fist jab issue and it seems that has been blown out of proportion as well. The Fox newscaster was previewing a segment on body-language and described ways that the fist-jab has been interpreted. She ACCURATELY reported that some people had described it as a terrorist fist jab. Once you realize that some people (nuts and moonbats, no doubt) interpret that fist jab as terroristic, the broadcaster's tease for the segment becomes harmless and, as I said, accurate.

Just to clarify, I'm just pointing out some things that have been going on (that the Obamas are offended, etc.), not saying whether or not they *should* be.

Mostly I just never like New Yorker covers, though I like the cartoons on the last page where readers caption them.

I actually think it's kind of funny. I mean, I laugh all the time at the ridiculous things people say about the Obamas. I get angry, too, of course, but when things get really absurd, I laugh. I think this cartoon is meant to elicit exactly that response. I mean, when all of the "critiques" are put together (the "fist jab," hating "whitey," not wearing a flag pin, so obviously hating America, etc) it all just looks so silly.

[...] is why Gwen was pessimistic about the New Yorker cover.  Another product sold at the Texas Republican [...]

It might be funny if it were on the inside of the magazine as a small political cartoon. On the cover, I think you're right: People who don't take the time to discern the difference between satire and fact may very well take this as acknowledgment that Barack is indeed a secret Muslim extremist.

[...] of Barack Obama that look suspiciously like those popular during and immediately after slavery (see here, here, and here). One common critique of our critique went something like this, “Well, if [...]

[...] other examples of accusations that Obama is Arab/Muslim (and that that is bad), see here, here, here, and here. For a non-racist caricature of Obama (showing it can, indeed, be done), see this [...]

[...] two racist caricatures of Obama: on a waffles box and as a cannibal. We also discussed the cover of The New Yorker on which Barack and Michelle Obama were caricatured as terrorists. Whether or not this was racist [...]

Sociological Images » Satire Means It Means The Opposite Of What It Means. So Chill! — June 30, 2009