Garrison Keillor likes to talk about how early exposure to The New Yorker shaped his life and career. The magazine’s sophistication and sensibility seemed worlds away from his everyday life, but its sparkling writing and urbane sensibility shone like a beacon to the small-town kid from Anoka, Minnesota.

Our adolescent experience was more downmarket. Chris, for example, would soak up every pulpy page of Creem magazine, from its cheap glossy cover to the snarky back-page captions accompanying snapshots of Iggy Pop and Blondie. The writing was a revelation, with everything from a perfectly-crafted Cameron Crowe feature to the wondrous wordbombs of Lester Bangs. For his part, Doug found himself immersed in Sports Illustrated, where more than a few great writers discovered that sportswriting is among the most flexible and creative outlets in American journalism.

Neither Contexts nor The Society Pages will ever out-gonzo Creem, out-hyperbolize SI, or out-refine Keillor’s Updike-era New Yorker, but we certainly aspire as editors to the inspirational and declarative power of such magazines. Whether in print or online, a well-constructed magazine conveys a sensibility and cultivates a vibe. More than that, it gives us concrete examples and directives for action.

Around here, we get especially excited about pieces that convincingly show us how social science matters for the world. For example, Contexts’ Is Hooking Up Bad for Young Women? brings high-quality evidence to questions about the sexual lives of young people that confirms some of our suspicions (women have better sex in relationships than in hookups), while busting some oft-repeated myths (the costs of bad hookups are usually much lower than the costs of bad relationships) and communicating it all effectively, using telling descriptors like “limited liability hedonism.”

We’d like to think such features inspire other social scientists to tackle issues front-and-center on the public radar, to bring high-quality evidence to bear, and to tell clear and convincing stories. Our editorial mission is to help showcase and propagate such work, in hopes of energizing and inspiring more social scientists to reach out to a public audience. And if they happen to write like John Updike or Lester Bangs, all the better.

Seeing a piece called “The Offensive Movie Cliche that won’t Die” on Salon.com today made me think of the academic treatment given to the subject of the “magical black man” by sociologist Matthew W. Hughey. Hughey’s August 2009 Social Problems article on the subject was discovered in the Spring 2010 issue of Contexts. You can read and discuss the discovery here, or read Hughey’s fascinating original article here.

While we’ve been scrambling to get the semester off to a good start, our colleague and recent Contexts contributor Donald Tomaskovic-Devey’s gone and written a great piece–a sort of One Thing I Know about Banks on the Huffington Post. Check it out, and we’ll be back soon! 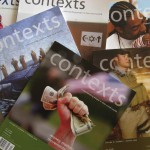 Facebook users only have seven options to characterize their relationship status: single,  in a relationship, in an open relationship, engaged, married, widowed, or it’s complicated. Nobody would view these categories as exhaustive or mutually exclusive (whose marriage isn’t complicated?), but they convey information about exclusivity and commitment, which tells readers something useful about the state of a relationship.

When people like us write for blogs or public outreach publications like Contexts, a big part of the job is characterizing a different sort of status — how much we really know about a particular issue or question. The best writers bring an authoritative voice and perspective to an issue, but they also try to offer a “fair read” of the field. We like to think The Community Pages at The Society Pages are both provocative and responsible — provocative in engaging social questions, but responsible in characterizing what we know and don’t know about the answers.

When academics think we’ve mischaracterized the state of knowledge, they can weigh in with counter-evidence and strong commentary. In forums like this, non-academics can also sniff out potential biases and join the debate; though they are generally at a disadvantage in judging a scholar’s reading of the social-scientific literature, other commenters may also have broad perspective,  opinions, and ideas to share. So it is all the more important to support and recruit bloggers who write with a clear and informed vision of the social science research in their area.

In principle, we could imagine Facebook-style drop-down menus to help categorize the state of knowledge on particular questions. These might offer status indicators and updates, such as

Unfortunately, when reporters ask social scientists a concrete question about the social world, our default knee-jerk answer is to say that “it’s complicated” and leave it at that. In fact, we might go on to say, the answer is so spine-crushingly complicated that any anwer we might provide would only confuse and bewilder a general audience.

But some social scientists, in these pages, the blogosphere, and the popular press, effectively employ their training and experience to offer compelling and useful insights. They know their areas, address provocative questions, and engage them with informed commentary. And they don’t rely on a lazy positivism or simple tally of studies to guide them in characterizing a field. The best among them offer a fifth status alternative — we need to think about this differently — that breaks out of the fixed-choice status box.

In reframing the world’s questions and events, the finest blogs and commentary offer synthesis and interpretation that conveys how we think as social scientists, as well as what we know. Such work is more subtle and demanding than checking a box, but it can yield a different and profoundly useful way to see a problem.

In January 2008, we became the editors of Contexts, the American Sociological Association’s public outreach magazine. As part of our editorship and with support from the College of Liberal Arts here at the University of Minnesota, we launched contexts.org as an online supplement to the print publication. In the past two years, largely on the popularity of our independent bloggers and hard working graduate students, contexts.org has become one of the most prominent and vibrant sociology sites on the Internet.

As we enter the final year of our editorship of the print publication (which itself will welcome a new publishing partner in January), we have been thinking seriously about how to maintain the burgeoning web content we’ve developed over the past couple of years as well as how to enhance the mass media visibility and influence of social science more generally. To this end, we are launching the new web platform you are reading right now: The Society Pages.

The Society Pages will be an online, multidisciplinary social science project headquartered in the Department of Sociology at the University of Minnesota. Initially, The Society Pages will work much like the contexts.org site has in the past. It will be a mix of Minnesota-produced content along with community blogs from around the world that we host, support, and publicize. We will also continue to host contexts.org as long as we edit the print publication (and well beyond that, if the ASA and future editors want us to continue).

Eventually, we plan to extend the scope of The Society Pages beyond sociology to encompass the full range of the social sciences. Indeed, over the course of the next year, we’ll bring some new, interdisciplinary authors and contributing authors (from Minnesota and far beyond) into the mix and begin rolling out a steady stream of new content and features. Our goal is to make The Society Pages the go-to destination for social science online. And we will use this little spot—the Editors’ Desk—to play cheerleader, project leader, and sounding board along the way.

We’re excited to get started with The Society Pages. If you’re as excited as we are about the possibilities for social science online, or if you’d just like to get your name in the society pages, let us know! Any questions? Feel free to email us at editors@thesocietypages.org. Otherwise, we hope you will make thesocietypages.org a regular stop on your Internet travels.