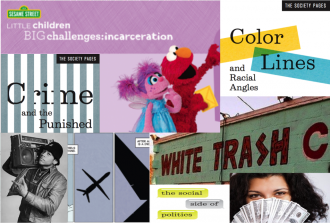 Don’t Call it a Comeback

You know, come to think of it, I’m sure I’ve used that title before somewhere on the site. But you know what? I haven’t used it enough. So there.

Hrm. After skipping last week, I’ve got a lot to round up, so let’s just go with that. In the meantime, know that we’ve been putting the finishing touches on the second of our TSP readers with W.W. Norton & Co., Crime and the Punished, which is now slated for a fall release. If you look closely in the picture at right, you can see three of our cover images coming into focus (they’re not finalized, but they’re looking sharp).

Until then, feast your eyes on this!

Since we’re talking (white) trash this week, don’t forget to read up on rebel rock and Southern masculinity with Jason Eastman—worth it for the music videos, alone! “Southern Culture on the Skids.”

“White Trash: The Social Origins of a Stigmatype,” by Matt Wray. In which we learn there’s been “white trash” since the 1820s and their compulsory sterilization has only recently been retired.

“Social Facts and Conspiracy Theories,” by Doug Hartmann. Conspiracy theories are worth our attention, no matter how loony they may seem.

“National Numbers and North Dakota,” by Andrew Wiebe. My homeland continues to be the odd duck.

“Class and Climate in China,” by Andrew Wiebe. Where smog isn’t really a #firstworldproblem.

“Evil Men,” by Hollie Nyseth Brehm. How to use a podcast about war criminals in the classroom.

“How Lives Can Be Saved By Stressing Employer Verification Instead of Border Barriers for Immigration Enforcement,” by David FitzGerald. Militarized border crossings are ungodly expensive, in human and monetary terms.

“Why Does Immigration Arouse Deep Feelings and Conflicts?” by John D. Skrentny. Immigrants keep inflation in check, increase community security, and, umm, founded the country. Why are they so contentious in the U.S.?

“Immigration Reform and the Contentious Issue of Extra Visas for Science and Technology Workers,” by John D. Skrentny. Who counts as a “scientist”? The sticky issue of STEM Visas.