In 2008, Alaska Governor Sarah Palin grabbed the national spotlight when Republican presidential candidate John McCain nominated her to be his running mate. Although reporters were mistaken in their speculation that Palin was chosen to woo female voters from the Democratic Party, McCain’s choice of a woman for the GOP ticket both underlined and heightened the profile of conservative women in U.S. politics.

Conservative women activists are not a new phenomenon. As central actors in social movements on the right, they have been politically active for as long as feminists and their supporters have pushed goals such as women’s suffrage, equal pay, the Equal Rights Amendment, and legalized abortion. A full understanding of women in U.S. politics is simply not possible without recognizing the many ways in which conservative women have shifted, reshaped, and pushed the boundaries of political engagement and policy debates.

The Prominence of Conservative Women’s Organizations

A closer look at conservative national women’s organizations offers an excellent window into the efforts and impact of right-wing women. In addition to older groups like Concerned Women for America, the National Federation of Republican Women, and the Eagle Forum, a spate of newer organizations have gained visibility – including the Independent Women’s Forum, the Clare Boothe Luce Policy Institute, the Network of Enlightened Women, Smart Girl Politics, and the Susan B. Anthony List.

All of these groups use proven tactics to challenge feminist claims. Conservative women deliberately organize separately and visibly as women. In turn, their organizations position women in leadership positions and in the media to challenge feminists and argue that they, too, speak for, and represent American women. One activist referred to this strategy as playing “femball” – dramatizing a political contest between conservative and feminist women about who truly understands what American women want and who acts effectively on their behalf.

Non-Feminists Who Claim to Speak for American Women

Conservative women’s activism requires observers to drop the assumption that women are fettered by “false consciousness” if they do not pursue feminist goals. Although media accounts dubbed Sarah Palin a “conservative feminist,” most female activists on the right do not embrace that term. Indeed, much of their work and public rhetoric is explicitly antifeminist, and conservative women’s groups deliberately situate themselves in opposition to feminist organizations like the National Organization for Women and the Feminist Majority Foundation. They want to show that conservative women can organize for themselves, while remaining conservative in identity and goals. 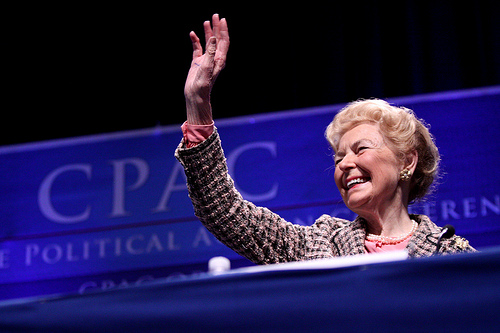 Women’s political participation on the right shatters the misconception that conservatives simply encourage females to “stay at home.” Although it is true that some conservative leaders like Eagle Forum founder Phyllis Schlafly believe that women should be primarily wives and mothers at certain points in their lives, Schlafly and others also hold that women’s domestic lives need not detract from political engagement. Groups like the Concerned Women for America maintain that it is women’s moral obligation as wives and mothers to fight for and protect their families. Indeed, activism is presented as a religious mission for members of that organization.

Conservative women’s organizations frame their positions as true women’s issues. Building on Schlafly’s successful opposition to the Equal Rights Amendment in the 1970s and early 1980s, today’s female conservative activists assert that they have better policies than feminists to help American women. Schlafly, for example, once asserted that the Equal Rights Amendment would harm women by forcing them into the military draft and encouraging men to abandon their financial obligations to their wives and children. Today, right-wing women make similar claims.

A Force to be Reckoned With

Like many scholars who study social movements, feminists and other progressives have too easily dismissed female activists on the right. But the efforts of these well-organized activists deserve be taken seriously. Conservative women enjoy close ties to members of Congress and other conservative leaders, and the media give them considerable air time. They have changed the parameters of public debate by deploying female voices to publicly contest feminist interpretations of the interests of American women. Just like men, politically engaged American women are ideologically diverse – and women’s activism from the right reveals much about the dynamics of gender politics and social movements in U.S. politics today.

Ronnee Schreiber is in the department of Political Science at San Diego State University. She is the author of the book Righting Feminism: Conservative Women and American Politics.