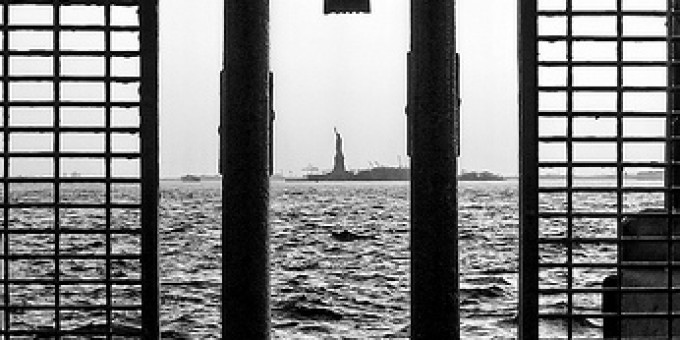 Though the United States is known as a “melting pot,” immigration has long been a divisive political and social issue here. Throughout the nation’s history, countless arguments have been leveled for and against immigration practices—with numerous connections made to the nation’s economy, sovereignty, and general sense of identity by both sides of the debate.

Taking these points into consideration, this roundtable discussion attempts to map the historical trajectory of immigration in the U.S. and elaborate on the multiple discourses that have surrounded it. Our panelists explain why immigration has remained an obsession for Americans, while it became almost a non-issue in the 2012 elections.

How has the discourse regarding immigration changed over the years, if at all?

Katherine Fennelly: The question makes me think of a statement by Simon and Lynch that Americans view immigration with “rose-colored glasses turned backwards” —i.e., with positive attitudes toward earlier groups of immigrants and negative ones about those who enter today. Nevertheless, platitudes about “celebrating our heritage as a nation of immigrants” mask some of the darkest events in our nation’s history, such as broad discrimination toward non-Protestant immigrants, anarchists, and others in the nineteenth century; periodic expulsions of Mexican and Chinese laborers; and the mass internment of Japanese Americans in the twentieth century. In spite of egregious examples of discrimination today, the existence of an extensive network of immigrant advocacy and human rights groups provides some counterpoint.

Douglas S. Massey: Over the long run, xenophobia and anti-immigrant sentiment run in cycles, usually peaking just after a period of high immigration. Today’s cycle [in the U.S.] is the worst we’ve seen since the 1920s. It began in 1965, when the U.S. changed its laws to restrict the opportunities for legal immigration from Mexico (which, in the late 1950s, had been running at half a million per year—450,000 guest workers and 50,000 permanent residents). In 1965, the guest-worker program was terminated and permanent residence visas were capped numerically for the first time, with the cap reaching 20,000 per year in 1976. Between 1965 and 1979, the number of undocumented migrants increased rapidly until the flow of the 1950s was reestablished—except that 90% of the entries were now without authorization. The rise of “illegal” migration inspired immigration bureaucrats and conservative politicians to frame Mexican immigration as a new threat, since the migrants were illegal, so they were, by definition, “criminals” and “lawbreakers.” Between 1965 and 1980, we see increased framings of immigration in the media as an invasion, a flood threatening the United States, and public opinion turns increasingly conservative and hostile to immigrants. After 1996, immigrants are increasingly conflated with terrorists and the Mexico-U.S. border becomes a symbol in the “war on terror.” Hostility [toward immigrants] escalates to a peak after the economic collapse in 2008.

What about immigration allows it to remain such a fiercely debated topic within the contemporary United States?

Espiritu: Immigration policies are highly contested because they are not only instruments of border control, but also of social control. In the United States, immigration has been a technology of racialization: restrictive immigration laws have not only curtailed new arrivals but have also produced new racial categories such as the “excludable,” the “alien” (Asian immigrants), and the “illegal” (Mexican immigrants)—categories that have outlasted the eventual repeal of these discriminatory laws. Cumulatively, these race-based policies, buttressed by popular culture, have put European and non-European immigrant groups on different trajectories of racial formation with different prospects for full membership in American society. As an example, the 1924 Johnson-Reed Act, which excluded Asians from immigration on grounds that they were racially ineligible for citizenship, cast Asians as permanently foreign and unassimilable. This has continued to negatively affect the group’s social and cultural citizenship in the contemporary U.S.

Massey: Anti-immigrant groups, political opportunists, and self-interested bureaucrats are constantly pumping misinformation about immigrants and immigration into the public sphere, financed by wealthy interests who would rather see middle America mad at brown-skinned “alien invaders” than Wall Street bankers and hedge fund managers.

Aside from the DREAM Act and the hotly contested state voter ID laws, the topic of immigration seemingly took a backseat to other social and political issues in the 2012 general election. For instance, immigration was almost a non factor in the presidential and vice presidential debates. Why?

Espiritu: Although immigration was not an explicit topic in the various debates and on the campaign trail, it certainly was present, coded most often in terms of the “Latino vote.” In the contemporary United States, the term immigrant has become a stand-in for Latino immigrant, most often for undocumented Latino immigrant. So I’d argue that any campaign rhetoric about the “Latino vote,” both positive and negative, had an underlying immigration theme to it.

Fennelly: Immigration has been called the “third rail” of American politics. This is particularly true today, when relatively small, well-funded, right-wing groups have gained prominence and succeeded in convincing the public that immigrants pose an economic, social, and political threat to the nation. Politicians are cowed by this. At the same time, recognition of the rapid growth of Latino voters who care about immigration policies has led to a kind of stasis, in which anti- and pro-immigration groups cancel each other out.

In an increasingly transnational world, is it feasible for countries to maintain stringent border control and immigration regulations?

Massey: No, all of our efforts at control have backfired—transforming what had been a circular flow of male workers going to a handful of states, into a settled population of families living in all 50 states and doubling the rate of undocumented population growth for more than a decade—all at the cost of billions of dollars of taxpayer money.

Fennelly: It is certainly feasible for governments to continue to invest in border security, in spite of its ineffectiveness. Sadly, the funding of weapons, border surveillance, and incarceration of immigrants often serves as a purposeful distraction from governments’ inability to address real security threats or intractable domestic problems.

Espiritu: In any discussion on border control and immigration restriction, we have to first acknowledge the roles that the U.S. government and corporations have played—through colonialism, imperialist wars and occupations, capital investment and material extraction in Third World countries, and through active recruitment of racialized and gendered immigrant labor—in generating out-migration in the first place. In this “transnational” world, it is not only unfeasible, but also unethical for the United States to de-link its immigration policies from past U.S. corporate, military, or governmental actions abroad. As the old saying goes, “we’re here because you were there.”

Stephen Suh is in the sociology program at the University of Minnesota and is a member of The Society Pages graduate editorial board.

Yen Le Espiritu is in the departments of sociology and ethnic studies at the University of California, San Diego. She is the author of Home Bound: Filipino American Lives across Cultures, Communities, and Countries.

Katherine Fennelly is in the Humphrey School of Public Affairs at the University of Minnesota. She studies immigration, diversity, and health as they relate to public policy.

Douglas S. Massey is in sociology and the Office for Population Research at Princeton University. He is the author of Brokered Boundaries: Creating Immigrant Identity in Anti-Immigrant Times.

[…] “American Immigration and Forgetting,” by Stephen Suh. The topic that just won’t get settled, immigration is, again, in the news. Check in with top scholars Yen Le Espiritu,  Katherine Fennelly, and Douglas A. Massey for a historical overview and a sociological perspective. […]

[…] “American Immigration and Forgetting,” by Stephen Suh. In which Yen Le Espiritu, Katherine Fennelly, and Douglas S. Massey discuss the trajectory of immigration in the U.S. and how it became a non-issue in the 2012 election. […]

My name is Lilly and the company I work for has a website which deals with mainly US citizenship information.I'm happy to have found your site http://thesocietypages.org/roundtables/immigration/ with similar info .I'd love to have our website http://www.uscitizenship.info/usa-immigration-history/index.html added to your great list of resources. Hope your future visitors benefit out of it as much as I did. Thank you for your time and take care.

Look forward to hearing back from you.

Thanks,
Lilly Graham
US CITIZENSHIP INFO.

Yen Le Espiritu is in the departments of sociology and ethnic studies at the University of California, San Diego. She is the author of Home Bound: Filipino American Lives across Cultures, Communities, and Countries.

Katherine Fennelly is in the Humphrey School of Public Affairs at the University of Minnesota. She studies immigration, diversity, and health as they relate to public policy.

Douglas S. Massey is in sociology and the Office for Population Research at Princeton University. He is the author of Brokered Boundaries: Creating Immigrant Identity in Anti-Immigrant Times.