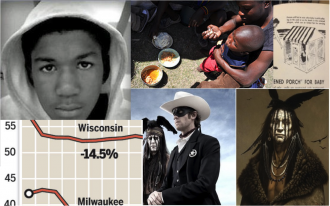 “Thinking About Trayvon: Privileged Response and Media Discourse,” by Stephen Suh. A roundtable discussion from just months after Trayvon Martin’s death, this piece looks at media framing and public responses.

“The Home Stretch (Or: Introducing Our Third Book),” by Doug Hartmann. In which Doug details some of the coming content for Color Lines and Racial Angles, TSP’s third reader from W.W. Norton (the first two volumes are due out by the end of the year).

“Economics, Sentimentality, and the Safe Baby,” by Letta Page. An economist walks into a baby expo… and calls on some classic social science.

“The People’s Art,” by Letta Page. If a society is enriched by its art, is it impoverished by keeping that art in museums?

“A Gender Gap and the German Model,” by John Ziegler. An emerging education gap shows women outstripping men in the race for diplomas in the U.S. Does Germany offer a solution?

“‘Spiritual’ Scofflaws,” by Evan Stewart. What happens when there’s neither an angel nor a devil on your shoulder.

“Why Immigration Reform with a Path to Citizenship Faces an Uphill Climb in Congress,” by Tom K. Wong.

“What Happens if [Now that] the Supreme Court Weakens [Has Weakened] Voting Rights?” by Gary May.