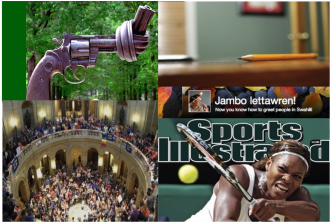 As a prematurely old person (that is, I’m technically 33, but I make a suspicious number of references to “those damn kids” and know the difference between e.g. and i.e.), I can be wary of social media. Still, I’ve found one way Twitter is really useful for the writers I advise: forced brevity.

Off the top of my head, I have two approaches to using Twitter to guide writing, and I’d be happy to hear others’ ideas.

Both of these ideas come back to thinking of your article in terms of how you’d tell your mom or kid or next door neighbor what you’re writing about this summer. What context would make it as interesting for them as it is for you? And how could you say it across the fence? That’s a lot of rhetorical questions for an editor who doesn’t like them, so trust that I’m being both serious and off-the-cuff here.

Now, we have some catching up to do. Time for the Friday Roundup!

Because we know not everyone gets to read everything we post (you really should be working TSP into your schedule better, readers!), I want to include a piece each week that deserves a second look. Here’s this week’s:

“American Immigration and Forgetting,” by Stephen Suh. The topic that just won’t get settled, immigration is, again, in the news. Check in with top scholars Yen Le Espiritu,  Katherine Fennelly, and Douglas A. Massey for a historical overview and a sociological perspective.

“What Does an Atheist Look Like?” by Evan Stewart. In which George Yancey looks for what makes an American Atheist.

“Gendered Issues (of Sports Illustrated),” by Andrew Wiebe. In which sociologists don’t find female athletes on newsstands, at least not in the past couple of decades. I hear there’s a Sports Illustrated for Women now, though. Oh, please let it be pink! (Side note: seriously, check out the comments.)

“G. William Domhoff on Pension Fund Capitalism,” with Rahsaan Mahadeo. In which Domhoff, author of The New CEOs and Who Rules America?, discusses the relationship (or lack thereof) between retirement funding and corporate bottom lines.

“First Day of Class,” by Hollie Nyseth Brehm. In which summer instructors break the ice.

“Racial Stereotypes, Scapegoating, and the Economic Crisis,” by Kia Heise. In which Heise shares a few ways to talk about Catherine Squires new Office Hours podcast with TSP.

“The New Deal and the Origins of Our Time,” by Ira Katznelson.

“Americans Care about Inequality when it Limits Opportunity,” by Leslie McCall.

“Are Religious Americans Opposed to Science?” by John H. Evans.

“Why American Controversies Are So Central to U.S. Politics,” by Drew Halfmann.