Inheriting a Parent’s Story of Surviving the Holocaust

What follows is a statement given by CHGS Outreach Coordinator, Demetrios Vital at the 2017 Twin Cities Jewish Community Yom HaShoah Commemoration, coordinated by the Jewish Community Relations Council, and hosted at Beth El Synagogue in St. Louis Park.

Demetrios spoke as a son of a survivor on the process of transferring memory across generations. Following his statements, he read the text of his father’s testimony as published in the 25th anniversary edition of Witnesses to the Holocaust, a book containing the testimony of Minnesota Holocaust survivors and liberators produced by the JCRC. That text is included below.

I am deeply honored to be here with you all tonight. Thank you for having me and my father here.

I am the youngest son of Victor Vital. I am one of three children along with Rachel Vital Davis and Joseph Vital, and stand generationally between Victor and three grandchildren.

I’m one of many here who are children of survivors, or have family who survived, or who didn’t, and indeed even if we’re not directly related to those who experienced the Holocaust, we might all find access to stories and truly feel the impact of this history.

“Scaffold”: Atrocity-Art and Its Limits 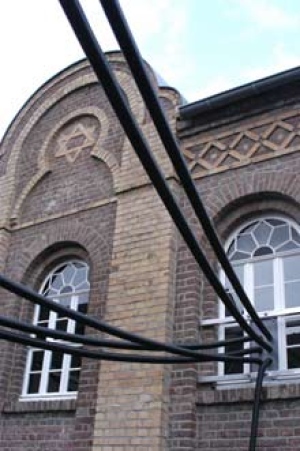 In March 2006, performance artist Santiago Serra constructed a homemade gas chamber inside a former synagogue in the Cologne area and invited Germans to be symbolically gassed. Exhaust pipes from six cars were hooked to the building, which was then filled with deadly carbon monoxide and visitors entered the space wearing protective masks. What was the artist’s intention? Serra said his aim was to give people a sense of the Holocaust. The Jewish community was furious. It was considered a provocation at the expense of Holocaust victims, an insult to survivors and the whole community. “What’s artistic about attaching poisonous car exhaust into a former synagogue?” said writer and Holocaust survivor Ralph Giordano (1923-2014), “and who gave permission for this?”

The following is an open letter to the organizers of an African Trade Forum event, who have announced that Maowia Osman Khalid, Ambassador of Sudan to the US, will be on campus for a panel co-hosted by the Carlson School of Management.

USC Shoah Foundation Center for Advanced Genocide Research has decided to endorse the initiative of a group of seven scholars from different Latin American countries to study Holocaust Survivors in Latin America as part of its Interdisciplinary Research Week. Not an alien in the context of terrorscapes and transitional justice, Latin America has been a space of contested narratives regarding mass violence.

In countries like Colombia, realities of forced displacement, illegal prosecution, and war narratives have been ongoing historically, which has been widely documented and studied. However, there is still much to be discovered, especially as these narratives coexist with narratives of survival from the Holocaust. In this regard, Latin America has been related to the Holocaust mostly as an important space for refuge after WWII.

One of the many key moments that led me to love the United States and its people happened in 1986. I was at a gathering of international students in Palo Alto, most of them with a European background just like me. The mood was very much anti-American, not the least because Reagan had just tried to kill Gaddafi by bombing Tripoli. He had missed the target but managed to create a lot of angst that WW III was about to break out. Everybody in the room was lamenting the ignorance of the Americans and political naïveté of their leaders in the harshest terms. I felt bad for the only American student in the group who got an ear full of unabashed Eurocentrism. After all, he was representing the host country and we didn’t really behave like guests, or, for that matter, like visitors from countries that had benefited from US protection as long as anybody in the room could remember. After everybody had unloaded, he just said, “You are probably right, the US is a big country, a lot of Americans don’t travel and don’t really know what’s going on outside the country, and sometimes we mess up.” He was the only one in the room who talked calmly, without drama and with a healthy shot of self-confidence. Back then, most Americans I talked to shared my fellow student’s relaxed and self-reflective form of patriotism. Possibly, because the lessons of the Vietnam War were still on everybody’s mind and the Cold War had not been won yet.

This year at the Sociological Research Institute, hosted by the Sociology Department at the University of Minnesota, the Center for Holocaust and Genocide Studies took home a few awards. Congratulations!

The Genocide Education Outreach (GEO) program was awarded the Public Sociology Award, an annual award to acknowledge the work of individuals reaching beyond their research to make change outside the university.  CHGS’s GEO program pairs graduate students based on area of expertise with community organizations in need of genocide education support in that area.

The Guernica Bombing and its Message for Today

This past week, the Basque town of Guernica recounted the sorrow and devastation inflicted 80 years ago. On that fateful late afternoon of April 26th 1937, German and Italian aircrafts, at the urging of their ally, General Franco and his right-wing Nationalists, unleashed their bombs on unsuspecting civilians.

Just nine months before, Franco had led a coup against Spain’s Republican government dragging the country into a civil war. The Nationalists eventually triumphed and Franco ruled Spain for the next 36 years.

For a long time, the word Guernica stirred powerful emotions among Spaniards and Europeans who witnessed the destruction wreaked by Fascism. It was a crime against humanity that shocked the world, and was later immortalized by Picasso’s famous expressionist mural. However, the 80th anniversary has received rather scant attention in the US. In my classes last week, I tried to explain to my students why Guernica should remain historically relevant to citizenry across the globe.

Le Pen on the Brink of Presidency: Nativism, Holocaust Denial, and Anti-Immigration

It seems, indeed, that the far right party in France is leading. The National Front (abbreviated “FN” for Front National in French) could possibly win the election after having lost in 2002 to Jacques Chirac. This is due to the fact that, in the last 15 years, France has become more conservative and protectionist, intensified by issues such as the migrant crisis and several terrorist attacks on French soil.

Capturing Every Day Life in Conflict

We have grown accustomed to seeing photographs captured during conflict dehumanizing victims and fetishizing their suffering. Our Eye on Africa column has previously discussed the disproportionate ways in which the pain of non-western victims is consumed through the media, even though it does not educate us about the context leading to the suffering. Yet, other forms of war-photography capture something else: everyday life under conflict. Instead of focusing on the pain and suffering of victims, these photographs aim to highlight the continuity of life. They focus on the possibility of a future and the necessity to maintain a sense of self. Conflict and suffering can in fact be captured in ways that do not always freeze moments of agony and death in eternity.

What Can Be Done? Ambassador Stephen Rapp on Justice in Syria

In a recent lecture by Ambassador Stephen Rapp, hosted by the Human Rights Program, he borrowed from Thomas Hobbes’ famous line to describe life in a world without justice. His presentation kicked off a lecture series about the ongoing Syrian crisis.

Saying that Ambassador Rapp has an extensive resume is an understatement: he served as Ambassador-at-large for War Crimes in the Office of Global Criminal Justice, a position which brought him around the globe to address a wide span of conflicts during his 2009-2015 term. His legal experience includes positions in the International Criminal Court and the International Tribunal for Rwanda, where he helped prosecute the first conviction for a member of the media in inciting genocide. Currently, he holds positions with the Hague Institute for Global Justice and the US Holocaust Memorial Museum’s Center for the Prevention of Genocide.