Sounding the Alarm: Comparing and Contrasting History in the Trump Era

Early this week Frank Navarro, a United States Holocaust Memorial Museum trained teacher who has taught at Mountain View High School in California for 40 years, was put on leave after a parent complained about the parallels he was drawing in his world studies class. He was accused of comparing Trump to Hitler, but in actuality he had only pointed out the connections between Trump’s presidential campaign and Hitler’s rise to power.

On September 1 of this year, Holocaust scholar Michael Berenbaum wrote in the article With gratitude toward Donald Trump, how as an educator, he was grateful to Trump for making it easier for him to explain to his students, how it was possible for the Nazis and Hitler to come to power. In my own classroom, it is my students who have made the connections, as I certainly did not have to spell it out for them.  We all agree that Trump is not Hitler, but certainly the rhetoric and unabashed racism, antisemitism and xenophobia unleashed by his campaign reminds us of the tactics used by Hitler, the Nazis and his followers.

Last month marked the 5th anniversary of the 2011 Maspero Massacre. During the first Egyptian revolution, almost 10,000 Copts and allies gathered in Cairo to peacefully protest the demolition of a Coptic Church in Upper Egypt. The army responded to these protests and initial clashes resulted in the death of three soldiers. TV show host, Rasha Magdy, reported that Copts were attacking the army, and that “patriotic people” should take to the streets to protect the military from the “violent crowd of Copts”. Eyewitness accounts claim that alongside mobs, the Egyptian army and security forces used riot gear, batons, live ammunition and armored vehicles to attack the protesters. However, the extent of the involvement of the Egyptian army is still contested. These clashes resulted in nearly 30 deaths, mostly Copts, and almost 300 injuries, marking this incident as the Maspero Massacre. Five years later, only three soldiers were punished with a maximum sentence of three years, and the massacre is not even recognized as one, let alone commemorated.

When I checked my departmental mailbox this week there was a postcard from the UMN administration that couldn’t be more timely: it showed two students wearing maroon and gold, hugging — one blonde and Caucasian and the other black and Somali — and a very simple phrase: “You are here. We like that.” 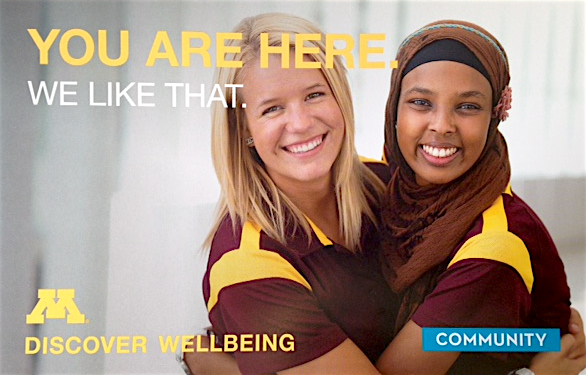 One might wonder why such an obvious message would be at all necessary at a major American public University. The political reality that has unfolded in this country over the last months — reaching its culmination on Tuesday — has sadly shown that this reminder is more necessary than ever. Basic democratic norms, pluralism and willingness to coexist peacefully with people of different religions, languages and origins, has proven not to be a given for millions of Americans.

This chilling eye-opener comes on a fateful date. The night of November 9th marks the 78th anniversary of Nazi Germany’s state-sponsored riots known as Kristallnacht (Night of Broken Glass), a turning point in Hitler’s anti-Jewish policy. Before I read about Kristallnacht in books I had heard about that infamous night from my father, who remembers to this day how the police came to his home in Pirmasens, a small town in the Palatinate region, and arrested his father. By fortune, and unlike so many other Jewish families, they were able to leave Germany in time.

The Kristallnacht commemoration teaches that democratic institutions and values are not automatically sustained and that a modern society can become numbed to the fate of its minorities. This day reminds us what occurs when a community based on mutual acceptance has been destroyed. This day urges us to be mindful that the path that leads from verbal incitement to discriminatory policy and murderous action can be very short.

The Center for Holocaust and Genocide Studies November/December newsletter is devoted to this historical event and features a number of educational resources (bibliographies, testimonies, artwork, newspaper articles). In this newsletter we ask our readers to teach the lessons of the past to wind back the divisive rhetoric that has been unleashed.

Urgent Action in Relation to the Chemical Attacks in Darfur: Open Letters to U.S. Government Officials and UN Personnel

The Special Advisors on the Prevention of Genocide and Crimes Against Humanity to the UN Secretary General, respectively.

From: Scholars of Genocide Studies from Across the Globe, Human Rights Activists, Anti-genocide Activists, and People of the Cloth

Re., Actions That Must Be Taken Immediately in Regard to the Chemical Attacks on Darfur

Rami Malek recently won an Emmy for Outstanding Lead Actor in a drama series for his role in Mr. Robot, designating him as the first “non-white” actor to win this award in 18 years. Malek was born in the US to Coptic Christian-Egyptian parents, meaning that his win is widely celebrated amongst Arab, Egyptian, Coptic, and American communities. This win highlights the fluidity and complexity of identity, and particularly sheds light on debates about Copts as Egyptians, Copts as Arabs, and Middle Easterners and North Africans as non-white.

Dr. Barbara Weissberger is an emerita professor in the University of Minnesota’s Department of Spanish and Portuguese Studies. Next month, she will be presenting her work at the Blood Libel Then & Now: The Enduring Impact of an Imaginary Event conference in New York City.

The Edict of Expulsion of all unconverted Jews that Queen Isabel and King Fernando issued in April of 1492 ended more than a millennium of co-existence between Christians and Jews in the Spanish kingdoms. Between 1391 and 1413 that often fragile co-existence began to unravel when real and threatened violence against Jews caused a massive wave of conversion to Christianity, creating a diverse group known as conversos. Prior to the conversions, blood libel accusations against Jews in Spain, unlike in the rest of Europe, had been exceedingly rare.

Indigenous Youth and the Looming Threat of Cultural Genocide in Minnesota

On August 20th, the Star Tribune published a story highlighting the incredible disparity between Native Americans and the rest of Minnesota in foster care placement. According to Stahl and Webster’s article, American Indian youth are ten times more likely to end up in foster care in comparison to the rest of the state. On average, two indigenous youth are sent to foster homes in Minnesota every day, the highest rate in the nation.

The sheer number of Native American children being sent to foster care in the United States is creating a significant problem. In 1978 Congress passed the Indian Child Welfare Act (ICWA). At the time, it was an attempt to keep Native American youth in tribal communities by placing them with Native foster families whenever possible. Now nearly thirty years later, Minnesota has a shortage of Native American foster homes to house the increasing number of children being taken from their home.

Genocide is a familiar topic to Germans. Today, it is almost impossible to visit Germany and not confront remnants of the darker chapters of the country’s history. Germans interact with and recognize a variety of tangible reminders of the crimes committed by the Third Reich. Countless memorials stand as physical evidence of a violent “past that will not go away”—a past that a majority of Germans publically acknowledge should not go away.[1]

But what about Germany’s other genocide? What place does its memory have in German society today? Between 1904 and 1908, German colonial soldiers carried out the first genocide of the twentieth century in what is now the present-day African state of Namibia (German Southwest Africa).[2] This systematic campaign against Herero and Namaqua peoples—regarded by some scholars as the “Kaiser’s Holocaust”—claimed the lives of over 100,000 men, women, and children through starvation, imprisonment, exile, and murder. German colonial leaders’ impetus for the genocide arose during the so-called Herero-Namaqua Aufstand (Herero-Namaqua Uprising), which began in January 1904 when Herero leaders revolted against the German administration in Southwest Africa. The Namaqua joined the campaign several months later.

Last week marked the 154th anniversary of a conflict that would reverberate across the United States. Its history has been clouded by the American Civil War, leaving it often as a mere footnote in larger conflicts. Fighting in the Dakota Conflict unfolded over only six weeks, during which hundreds of Minnesota settlers were killed or displaced. However, it is the conflicts impact on the Dakota that has left the longest legacy. After the war, more than eight hundred Dakota men were sentenced to death and thirty-eight would be hung in Mankato in 1862 – still the largest mass execution in American history. More than 1,600 women, children and the elderly spent a winter interred on Pike Island on the Mississippi before being shipped to reservations in Nebraska. Disease and starvation was rampant. In another act of indignity, Congress passed legislation banning the Dakota from returning to Minnesota – a law that remains on the books more than a century and a half later.