Tibisay is a PhD candidate in the History Department. She was born and raised in the city of Barcelona, Spain, and obtained her BA in History from the University of Barcelona (UB). During her bachelor’s degree she had the opportunity to spend a semester abroad in Mannheim, Germany, where after noticing how differently modern history was taught in Germany as opposed to Spain, she started to become interested in the ways in which past events of mass violence are remembered and taught in different countries.

Nikoleta (Nika) Sremac is a third-year Ph.D. Student in the Department of Sociology. She received her BA in Political Science – International Relations from Clark University in Worcester, Massachusetts. Her research focuses on the intersections of gender, culture, politics, and collective memory of mass violence in the U.S. and the Balkans. She is interested in the role of cultural production and political activism in processing past violence in the service of post-conflict reconciliation.

Michael was born and raised in New Jersey and moved to Minneapolis in 2016 to pursue his graduate studies. He is a Ph.D. Candidate in Sociology and a Fellow at the Interdisciplinary Center for the Study of Global Change (ICGC). He has a MA from the University of Sussex in the United Kingdom and a BA from Harvard University.

Meyer Weinshel is a PhD candidate from the Department of German, Nordic, Slavic & Dutch. He received his BA from Macalester College and MA from the University of Minnesota. His research and teaching interests include German Jewish literature and culture, modern Yiddish literature and culture, and translation studies. He is completing his dissertation, “Dos eygne Daytshland: Anthologizing Jewish Multilingualism in and beyond the Habsburg Empire.” The project traces the ways German-language poetry in Yiddish translation shaped modern Jewish cultural developments in/beyond Central Europe. He studied Yiddish at YIVO’s Uriel Weinreich Summer Program (2015, 2017) and at the Vilnius Yiddish Institute (2016). In 2018-19, He has also completed research in Jerusalem at the National Library of Israel and began study modern Hebrew.

Jillian LaBranche was born and raised in southern New Hampshire. She graduated from Rhodes College with a BA in International Studies and a minor in Religious Studies. During this time, she studied abroad in Rwanda and Uganda studying violent conflict and peacebuilding. She received an MA in International Human Rights from the Josef Korbel School of International Studies at the University of Denver and an MA in Sociology at Brandeis University. She is now a PhD student in Sociology at the University of Minnesota. Jillian serves as a member of the graduate editorial board for The Society Pages and participates in the Genocide Education Outreach (GEO) program. During the 2020-2021 academic year, Jillian hopes to begin her dissertation research.

Kathryn Agnes Huether was born and raised in rural Montana. As the daughter of a music teacher and a school superintendent, music and education were always at the center of her life. At the age of 4, Kathryn’s mother, Renée, introduced the violin into her life, driving 100 miles one way for a half-hour violin lesson. Renée’s dedication to her daughter’s musical training dynamically shaped Kathryn’s worldview and studies, as did David, her father, who exemplified hard work and kindness. Kathryn graduated with a double BA in Violin Performance and Religious Studies from Montana State University in 2013. Following undergrad, Kathryn went on to attend the University of Colorado-Boulder, where she received a Master’s in Religious Studies, with an endorsement in Jewish Studies. Her first Master’s thesis was the catalyst for her PhD research, as she examined the soundtracks of two Holocaust film documentaries, Night and Fog (1956) and Auschwitz Death Camp: Oprah, Elie Wiesel (2006), arguing that the accompanying soundtracks subjectively influenced a viewer’s reception and understanding of the documentary material presented.

Brooke is from the small town of Chagrin Falls, Ohio. She graduated from The Ohio State University with a double BA in Sociology and Psychology and a minor in Italian. Before beginning graduate school, she worked at the 2015 World’s Fair in Milan, Italy and interned with the Center for the Prevention of Genocide at the United States Holocaust Memorial Museum in Washington, DC. She is now a Sociology PhD student at the University of Minnesota, where she is minoring in Human Rights. Brooke serves as a member of the graduate editorial board for The Society Pages, manages the Genocide Education Outreach (GEO) program, and works for the Center for Holocaust and Genocide Studies.

Brooke’s research interests include knowledge, violence, and reconciliation in Africa. Her research seeks to better understand generational trauma in contemporary Rwanda. She completed pre-dissertation research this past summer in Kigali, where she interviewed young Rwandans about their understandings of the 1994 genocide. She is interested in the commemorative process and has conducted ethnographic work at a number of memorial sites and ceremonies. For her research on the Rwandan genocide, Brooke was awarded the prestigious 2018-2019 Bernard and Fern Badzin Fellowship! In addition to her dissertation work, Brooke is involved on projects about denial of the Armenian genocide and the Rwandan gacaca courts.

George Dalbo was born and raised in Western New York. His first encounters with the Holocaust were as a high school Rotary exchange student in Wels, Austria. After his exchange year, George studied European history and German literature at the University of Buffalo, earning his B.A. Following his degree, George was awarded a joint research-teaching Fulbright grant to Vienna, Austria, where he divided his time studying Austrian and Eastern European history at the University of Vienna and teaching English as a foreign language in a Viennese public school. George moved to Minnesota in 2008, earning his secondary social studies license and M.Ed. from the College of St. Scholastica. George taught middle and high school social studies at several schools within the Twin Cities metro. He developed and continues to teach a comparative genocide studies course for juniors and seniors who attend one of a consortium of private schools from around the country.

Beginning a Ph.D. in Social Studies Education at the University of Minnesota in 2017, George’s research interests center around Holocaust, genocide and human rights education for K-12 students. In addition to his coursework and work supporting social studies licensure candidates through their student teaching earpieces, George works with the Center for Holocaust and Genocide Studies developing curriculum and educational resources. In summer 2018, George will facilitate a weeklong educators workshop, Gender and Genocide: Uncovering Absent Narrative in Mass Violence and Human Rights Education. The workshop will support middle and high school educators in developing and expanding their coverage of absent narratives related to genocide, especially those around gender and sexual orientation.

Moritz has been recently awarded the 2017-2018 Bernard and Fern Badzin Fellowship in Genocide and Holocaust Studies! Congratulations, Moritz! 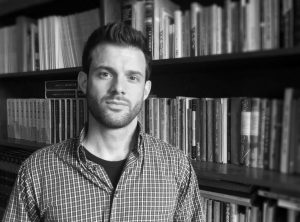 Moritz was born and raised in Berlin, Germany and moved to Minneapolis in 2013 to pursue his graduate studies. He received his M.A in Germanic Studies from the University of Minnesota in 2015. Before moving to the United States, Moritz had a vocational career in theater, stage lighting, and intercultural communication. He studied Cultural Studies (cultural history major, linguistics minor) at the European University Viadrina Frankfurt (Oder), where he received his B.A. in 2012. Moritz’s teaching and research interests are modern European literary and intellectual history, German-Jewish history and modern Ottoman/Turkish history. Moritz is interested in the representation of the Holocaust and experience of exile in literature and the arts and focuses on the encounters of Holocaust representation with other forms of twentieth-century violence, specifically for the case of Turkey and the Middle East.

Moritz is currently working on his dissertation project on the history of German and German-Jewish exile in Turkey during the 1930/40s. Focusing on the case of the literary critic Erich Auerbach (1892-1957), who wrote his most influential works on European literature while in Turkish exile and later in the U.S., Moritz examines the relationship of German-Jewish émigré culture to Turkish intellectual history. During the 2017/18 academic year, Moritz will conduct research abroad and begin writing his dissertation (prospective defense: Spring 2019).

ty in Northern Ireland, she served in AmeriCorps as a Promise Fellow, taught sociology at a community college in Oregon, and was the Family Liaison at an Ojibwe culture and language school last year. With broad interests in mass violence, collective memory, and settler colonialism, she returned to Minneapolis to pursue her Ph.D. in Sociology at the University of Minnesota.

Brieanna writes for the CHGS blog on topics and events related to both American Indians broadly, and the Dakota and Ojibwe specifically. She is currently involved in a team project with Alejandro Baer examining over a century of local and national newspaper articles and their representations of the Dakota War of 1862; a timely undertaking, given the push toward revitalizing Fort Snelling and decisions to remove controversial art at the State Capitol. In addition, she is working on a side project with two other graduate students titled, “Imagining a “Final Solution” to “Never Again”: Experiencing Empathy through Digital and Non-Digital Games”.