The Courage for Civil Repair: An Interview with Carlo Tognato

This semester, Center for Holocaust and Genocide Studies research assistant, Michael Soto, had the opportunity to interview Carlo Tognato on his 2020 edited volume, the Courage for Civil Repair: Narrating the Righteous in International Migration. In this interview, Tognato discusses the evolution of his work and some of the core themes of this new volume. Below we share excerpts from this interview. Be sure to listen to the entire interview here!

A Conversation about Spanish Historical Memory and the Holocaust with Dr. Sara Brenneis

On October 6th, Dr. Sara Brenneis, Professor of Spanish at Amherst College in Massachusetts, was invited to the Center for Holocaust and Genocide Studies to give a talk on her book Spaniards in Mauthausen: the Representations of a Nazi Concentration Camp. I had the opportunity to sit with her (virtually) for a fascinating conversation, as she discussed her work on the interplay between fiction and history in 20th century Spain.

Memory, Trauma, and Survival in Japan and Beyond: A Conversation with Ran Zwigenberg

Ran Zwigenberg, Associate Professor of Asian Studies, History and Jewish Studies at Pennsylvania State University, was recently hosted by the Center for Holocaust and Genocide Studies and Center for Jewish Studies. He gave a talk entitled: “Survivors: Psychological Trauma and Memory Politics in Hiroshima and Auschwitz.” I sat down with Dr. Zwigenberg for a wide-ranging conversation covering survivor politics, the gendered dimensions of social work, praxis of care, the notion of social trauma, and other topics related to the global politics of memory.*

Nora Krug on Belonging: A German Reckons with History and Home

Nora Krug is a German-American author and illustrator. Her 2018 visual memoir Belonging: A German Reckons with History and Home about WWII and her own German family history, has won numerous awards and has been translated into several languages. Krug is an Associate Professor of Illustration at the Parsons School of Design in New York City. She spoke at the University of Minnesota in February 2020.

Body Knowledge and Torture in the ‘War on Terror’: A Conversation with Max Breger

Max Breger, a doctoral candidate and visiting scholar from the University of Siegen, Germany, was recently hosted by the Center for Holocaust and Genocide Studies. Breger has been in the United States for the past roughly two months, conducting research on torture committed by U.S. agencies, especially in connection with the larger so-called “War on Terror.” His work is part of a larger comparative research project led by Professor Dr. Katharina Inhetveen. Breger presented on the project and shared initial findings from his work with members of the Holocaust, Genocide, and Mass Violence Studies (HGMV) Interdisciplinary Graduate Group in a talk entitled: “Violent Interrogation, Psychology, and Body Knowledge: Torture in the ‘War on Terror.'” I sat down with Breger for an interview to learn more about the project.*

On Collective Memory and Historical Responsibility: An Interview with Jeffrey Olick

In this interview with Yagmur Karakaya, Prof. Olick demystifies processes involved in collective memory, discusses the role of emotions and nostalgia in remembrance, and introduces the notion of regional constellations of memory. Olick also untangles the fruitful concept of “legitimation profiles”, which he applies in his latest book to the ways Germany confronts the specters of its Nazi past.

Jeffrey Olick is a professor of sociology and history and chair of the sociology department at the University of Virginia. He is a cultural and historical sociologist whose work has focused on collective memory and commemoration, critical theory, transitional justice, postwar Germany, and sociological theory more generally. His books include “The Politics of Regret: On Collective Memory and Historical Responsibility,” and “The Sins of Fathers: Germany, Memory, Method”.

(Editor’s note: This is a condensed version of our interview with Dr. Olick. Follow the link at the end to read the interview in its entirety.)

The roots of today’s racial and religious structures can be found in late medieval Spain and its colonies. It was in the Iberian Peninsula, during the fifteenth century, that terms like (race) and (lineage) went from being used to describe horse or dog breeding to being applied to Jews and “Moors.” This switch coincided with the appearance of anti-converso ideologies, which would turn theological categories (like Jew and Muslim), into biological ones ( de ).

Postcards from Auschwitz: An Interview with Daniel Reynolds

Daniel Reynolds is the Seth Richards Professor in Modern Languages at Grinnell College in Grinnell, Iowa. His works the ways representation of the Holocaust has shifted in museums and memorial sites across the United States, Poland and Germany. His most recent book, Postcards from Auschwitz, was published last year.

In November, the Center for Holocaust & Genocide Studies welcomed Dr. Reynolds for a lecture where he touched on the themes of his latest book and Holocaust tourism’s effect on how we remember.

In October, the Center for Holocaust & Genocide Studies welcomed Hasan Hasanovic to campus to discuss his experience as a survivor of the Srebrenica genocide. Mr. Hasanovic was 18 when Bosnian Serbs systematically murdered more than 8,000 Bosniak men and boys in July 1995. Since then, Mr. Hasanovic has written an account of his story, Surviving Srebrenica (The Lumphanen Press, 2016), and spoken around the world on the topic of Srebrenica and genocide more broadly. For the last decade, he has served as a curator at the Srebrenica Memorial.

Joe Eggers: I’ve watched several of your interviews on television and especially your presentations at schools. What’s one message you hope they take away after you speak?

Hasan Hasanovic: It’s interesting. After the Holocaust, the whole world said “never again.” And very similar things were [still] happening afterwards—in Rwanda, Darfur, Cambodia, Bosnia. It’s happening here and now with Rohingya Muslims. Now we have this situation in China with Muslims—one million are being held in labor camps. Somehow we don’t have a mechanism to prevent these atrocities. We talk about them after ten, twenty years, and we feel sorry for victims and we try to say something about it and try to educate people, and that’s it. But what is lacking is that global mechanism, which should be the United Nations. Sadly, world powers have different interests and those interests are standing the way of global intervention and prevention of mass atrocities. I’m trying in a way to make a point that we need to talk about it and to make sure we keep that memory alive and to educate people, but at the same time remember that it’s still happening. And my hope is that when I talk to these audiences—that some of them will become politicians, some of them will pursue other professions—they will use this story and other stories of other atrocities in their lives, as a lesson, and they will become better individuals, better politicians, more humane politicians. And if they get a chance…to decide something that they will make an appropriate decision, thinking from a humane perspective, rather than the perspective of the interests of their political party or the interests of that power.

Chad Alan Goldberg is Professor of Sociology at the University of Wisconsin Madison. His interests lie in the sociology of citizenship, including the development of rights and duties over time, changing levels and forms of democratic participation and shifting patterns of civil inclusion and exclusion. He is the author of Citizens and Paupers: Relief, Rights, and Race, from the Freedmen’s Bureau to Workfare. His most recent book, Modernity and the Jews in Western Social Thought examines how Jews became a touchstone for defining modernity and national identity in French, German, and American social thought from the late nineteenth to early twentieth centuries.

Alejandro Baer: Your book highlights how for classical theorists, such as Emile Durkheim, Karl Marx or Robert Park, Jews became reference points for the interpretation of the new modern social order. Why do Jews occupy this singular space in the theorizing of modernity? 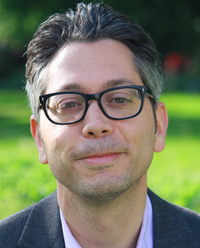 Chad Goldberg: To answer to this question, some people have pointed to the Jewish backgrounds of authors like Durkheim, Marx, Simmel, and Wirth. Others have suggested that the answer lies in the distinctive social positions that Jews occupied. There may be some truth to both views. Durkheim’s thinking, for example, was surely directed against the antisemitism of his milieu, and it’s true that German Jews were disproportionately engaged in commerce and more urbanized than the general population. But my book suggests another way to answer this question; I draw on the work of Lévi-Strauss to develop a relational (or, as others might say, structuralist) explanation.