“Harvesting Tattoos”: A Thesis from Buchenwald 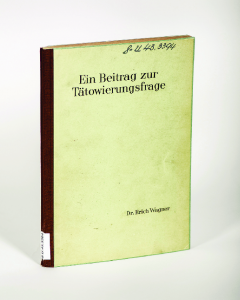 The Spanish daily El País published a shocking story last week about a rare and controversial document from the Buchenwald Nazi Concentration Camp. A PhD Thesis done by a Nazi camp doctor, Erich Wagner, titled On the Subject of Tattoos, that analyzes the tattoos of the camp’s earliest prisoners, many of whom were Jews arrested during Kristallnacht.

Wagner “meticulously catalogued the race, nationality, criminal past and education” of those sent to Buchenwald in an attempt to connect tattoos with criminal tendencies – an approach, needless to say, with no scientific merit.

In all, more than 800 prisoners were questioned by Wagner, and their tattoos photographed and examined. Wagner was infamous among those at Buchenwald. One survivor noted that all the patients the doctor operated on would die, likely so he could “harvest” tattoos of his victims.” Like the more infamous “Witch of Buchenwald,” Ilse Koch, Wagner displayed a disturbing fascination with the skin of his victims, one that went beyond scientific interest.

Wagner was sent to Buchenwald in 1939 as a member of the Waffen-SS.  A dissertation committee at the University of Jena considered Wagner’s scholarly contribution in On the Subject of Tattoos as “very good”. After the war, Wagner escaped prosecution before committing suicide in 1959. In 1957, experts found that his work had not only broken every possible principle of research ethics, but also that most of the interviews and the writing had been done by a Buchenwald prisoner, Paul Grünwald, under Wagner’s orders.

On the Subject of Tattoos has found its way to sale in the US. It is available at USM Books, a Rapid City, SD company that specializes in the sale of rare and controversial material relating to World War II.

The original text recently sold for an undisclosed amount. A translated copy is in the US Holocaust Memorial Museum’s library.