Something insidious, but sadly not unexpected, is happening in the Central African Republic (CAR)-over the past twelve months mass killings have been taking place in the CAR, a former French colony in a very rough neighborhood (it borders the Sudan’s to the East, Chad to the North, and DRC to the South). Things came to a head in March when the former president Francois Bozizé was deposed by a group of Muslim militants (Séléka) whom instigated sectarian killings and human rights abuses against the largely Christian populace. This has resulted in the formation of self-defense groups (Anti-balaka meaning ‘sword/machete’ in the Sango language) formed to protect the victims. This conflict is complicated by the fact that there are claims of the Séléka getting support from mercenaries in Sudan and Chad. 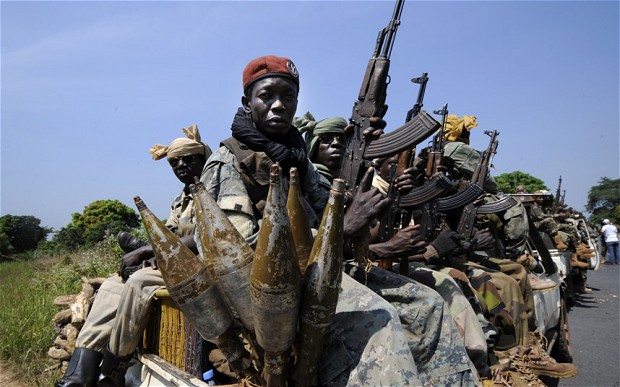 On the 5th of December, the UN voted to allow the French to send 400 troops into the CAR who would augment the already present AU battalion of 3600. The French intend on increasing this number to 1200 troops in the coming days following a sudden outbreak of killings within the last fortnight of women and children by Séléka forces (meaning ‘union’ in the Sangolanguage) that has resulted in 500 deaths and 189,000 fleeing their homes in Bangui. Fears of retaliatory attacks have become more pronounced leading both Burundi and Rwandato pledge to send troops to the country. While the number of deaths might seem deceptively low for a nation of about 4.6 million, it only accounts for Bangui since correspondents have not been able to venture outside that area.

In a letter by Medecins Sans Frontieres to the UN humanitarian system, MSF has accused the UN of indifference to the plight of the victims. It states that in the year that this atrocity has unfolded UN aid officials have done nothing but collect data that is related to the fighting and not provided assistance to the displaced people sheltering on the same compound as the officials.

It is important to note that this is not “another Rwanda” as has been suggested by some. This is a power grab by a cabal of rebels that seeks to control the vast minerals that are present in CAR. It is not an attempt to rid CAR of its Christian population but rather an attempt to instill fear and submission by a belligerent group. While there may be what some UN officials have called the seeds of genocide this does not ipso facto mean that “another Rwanda” is at hand. It is however, an atrocity that is fast degenerating and a humanitarian catastrophe that is getting worse. The international community finds itself at a crossroads like it has on several occasions (Syria and Mali being the most recent). The French and the AU have taken a proactive role in trying to mitigate the situation but more is needed. The UN humanitarian system also has to step up and rise to the challenge.

This weekend the first signs of hope appeared. Michel Djotodja, the current president and former leader of the Sélékaleader said that he is willing to negotiate with Anti-balakaforces. The only problem is that he barely has control of the capital city and some of his former fighters have gone their own way. This is coupled by the fact that no one is sure how much control the faction of Anti-balaka that is willing to negotiate is representative of the movement itself. All of this is compounded by the fact that Anti-balaka has no recognizable structure further throwing into doubt who the president is actually going to negotiate with. Is it simple? No. Is it hopeless? No. It will require some rolling up of sleeves by the UN, AU, France and possibly the UNSC. This development is, however, a small but positive step that has to be fostered and natured by the international community, the sooner the better