Son of Saul: A New Kind of Holocaust Film 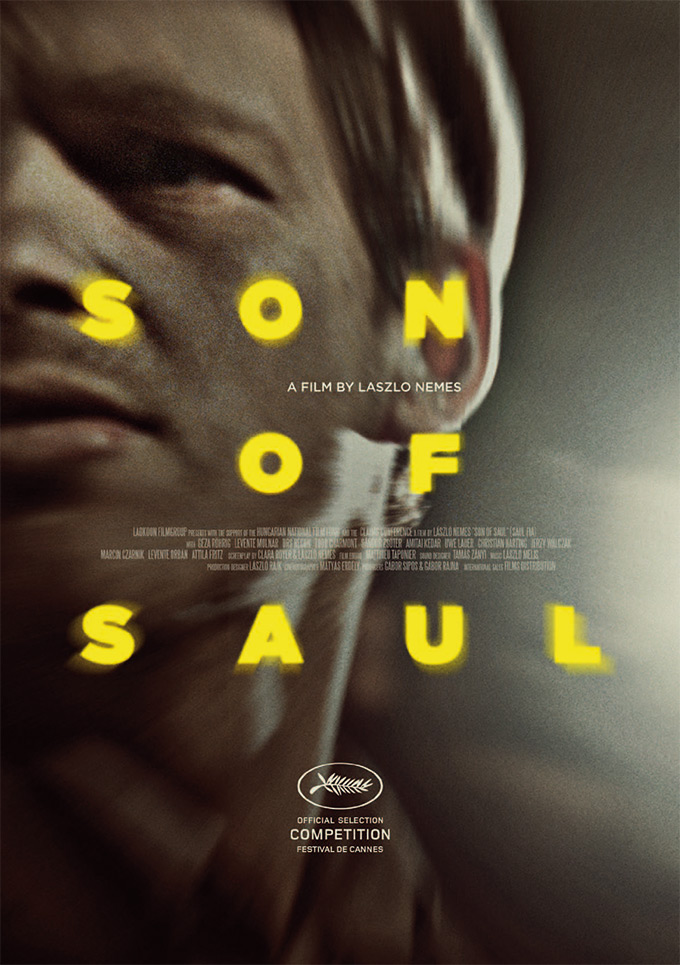 Son of Saul is a film about a member of the Sonderkommando (Jewish prisoners forced to aid in the killing process and clean up) at Auschwitz.  What sets Son of Saul apart from most films that deal with the Holocaust is that it is not presented in a traditional narrative structure. Hungarian director László Nemes upon accepting his Golden Globe for Best Foreign Film said “over the years the Holocaust has become an abstract. It deserves a face.” Certainly he does this immediately as the camera never leaves Saul; we are either looking directly at his face in close-up or over his shoulder. We experience events with Saul as he goes about his work and later his self-imposed mission, the burial of a boy. The movie is a visceral experience — there is very little dialogue, and we only see and hear what Saul sees and hears.  Nemes gives us very little to go on, we know nothing about Saul’s past, who he once was, prior to landing in Auschwitz.  Saul is introduced to us as he emerges from a combination of mist, smoke and sound. We are immersed in a world that is out of focus and filled with a cacophony of sounds, some so sharp and real one turns to look for the offending speaker in the audience.  Nemes and his sound designer Tamas Zanyi, recorded over eight different languages speaking dialogue to create aural chaos, these layers of sound combined with the close-ups and long takes are intended to disorientate, forming a psychological experience with Saul. Nemes does not use any sentiment or melodramatic devices to tell his story. We never form an emotional bond with Saul as one might to other characters in other films on the Holocaust.

How does Son of Saul measure up against Shoah?

The film does owe a small debt to Claude Lanzmann’s masterpiece documentary Shoah (1985), especially as it engages resourcefully with the limits of representation. Nemes has the horror take place at the edge of the frame, mainly in the shadows, out of focus, or through sound. It is relentless, but respectful. The scene involving our first encounter with the gas chamber is only reflected in the litany of expressions upon Saul’s face and the soundtrack of voices. The experience is left to our imagination. It is our knowledge of the Holocaust that creates the visual. In fact what we imagine is certainly far worse than anything he could recreate. Lanzmann in an interview given to French magazine Telerama on May 24, 2015 gave the film a positive endorsement claiming Son of Saul the “anti-Schindler’s List.” Lanzmann, was highly critical of Spielberg’s dramatic choices, especially the scene involving women entering the showers.

What Source Material was used to write Son of Saul?

Nemes and his writing partner Clara Royer, based their script on Voices from Beneath the Ashes, a collection of testimonies written by the Sonderkommandos that was hidden away in 1944. Nemes’s grandparents also perished in Auschwitz. It was personal, and is one of the reasons why he does not tell a tale of survival. Like Shoah, Son of Saul is a film about death.

Where was it filmed?

The gas chamber and crematorium were all sets built on a sound stage in Hungary by production designer Laszlo Rajk, an architect and political activist who was responsible for the creation of the Hungarian exhibition at the Auschwitz-Birkenau Memorial Museum.  That exhibition was one of the most jarring exhibitions I have ever encountered; it was described by a fellow participant at an educational conference as a “blitzkrieg” on the senses.  Like Son of Saul you are immersed and disorientated, by layers of sounds and visuals, reminding the visitor of the swiftness and violence of the murder of 400,000 Hungarian Jews in a few short months in 1944. The small exhibition leaves you completely depleted in the knowledge of those deaths and stays with you long after you exit.

Is this a film an educator can use in the classroom?

It is always imperative that we look at the film as a cinematic experience first. Not every film dealing with the Holocaust should be used in the classroom. Nemes, when questioned about the film, has said he has no interest in providing a manual for the film — the film is ambiguous on purpose, and that it is an artistic choice.  Not everything needs to be explained, it is a choice that leads the audience think about the film long after leaving the theater.

One always has to consider the level of knowledge the students have before showing any film.  Son of Saul relies on a higher level of knowledge to convey its meaning. It is not an easy film to watch, it is a film that asks you to consider the brutality, the victimization and the possibility of retaining ones humanity as a Sonderkommando at Auschwitz.

Will it win an Academy Award?

Probably, based on the Academy’s track record and the long running joke that if there is a Holocaust film nominated in any category, it will win an Oscar. It has already won the Grand Prix at Cannes and a Golden Globe for Best Foreign Film so the odds are good. All that aside, from a cinematic point of view it is a very artful film. The layering of sound, the camera techniques and the acting of Géza Röhrig, certainly make it a legitimate contender.

To learn more about the film or watch the trailer, visit Son of Saul’s official site.

If you’re in the Twin Cities, Son of Saul is playing now through the end of the week at the Uptown Theater and opens Friday, January 29th at the Edina Cinema.

Jodi Elowitz is an adjunct professor of the Humanities at Gateway Community College in Phoenix, Arizona and the Content Coordinator for the Center for Holocaust and Genocide Studies (CHGS) at the University of Minnesota. Ms. Elowitz’s area of expertise is artistic representation of the Holocaust in the visual arts with an emphasis on work done in the camps and ghettos. Current research is on Holocaust memory in animated film and the Holocaust in Polish Memory, particularly in film and tourism. Her most recent article “Seven Minutes in the Warsaw Ghetto: Representing the Unimaginable through Animated Film” was published in Short Film Studies Journal Volume 4, Number 2, 2014.