This month, Jodi Elowitz shares five selections that explore recent Holocaust fiction and documentaries from a variety of perspectives. 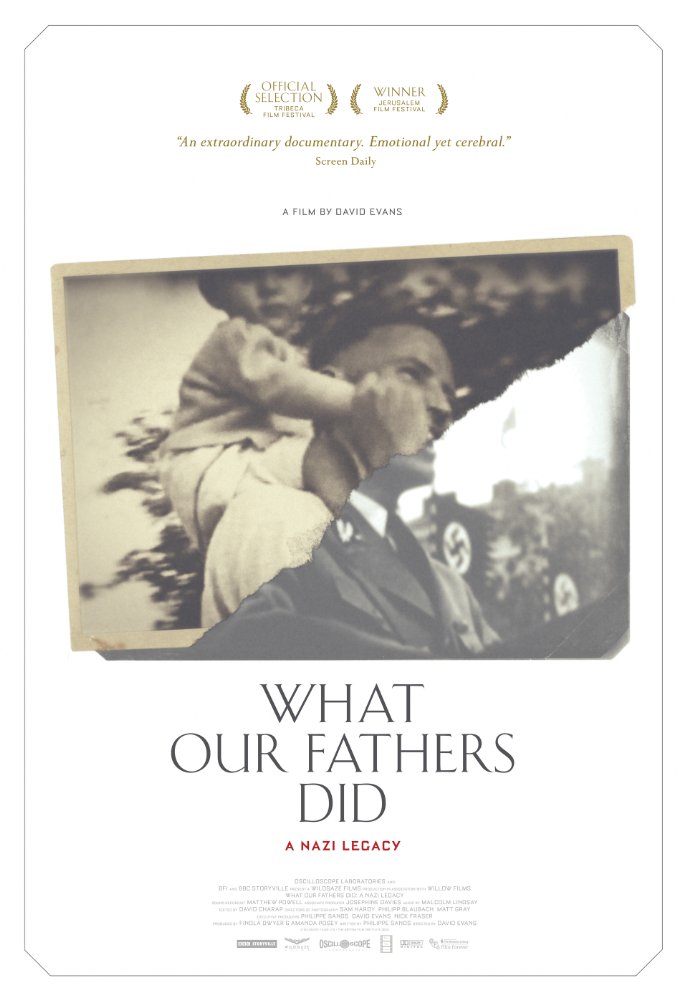 What Our Fathers Did: A Nazi Legacy (2015) is a documentary based on the article My Father, the Good Nazi (2013) written by British Lawyer, Phillipe Sands in the Financial Times Magazine. The article discusses the relation of Niklas Frank, son of Hans Frank, Governor General of occupied Poland (General government) and Horst von Wächter, son of Otto von Wächter, District Governor of Krakow, Poland and later District Governor of Galicia during World War II. Both men were responsible for overseeing the extermination of Jews and charged with war crimes. Frank stood trial at Nuremberg and was found guilty on counts three and four (war crimes and crimes against humanity), sentenced to death, and executed on October 16, 1946. Wächter escaped prosecution and died while hiding in Rome in 1949.

Whereas Niklas Frank has spent his life highlighting the crimes of his father, Horst Wächter has denied that his father did anything wrong and that he was caught up in a system and times he had no control over. Filmmaker Sands lost much of his extended family in the Holocaust in the occupied territory overseen by Frank and Wächter. The film is a brief examination of Frank and Wächter’s unlikely friendship and the confrontation of Sands and Frank on Wächter to convince him of his father’s role in the Holocaust.

Run Boy Run (Lauf Jugen Lauf) (2014) Based on the novel of the same name by Jewish writer, Uri Orlev, who wrote the very popular Young Adult novel, The Island on Bird Street. This is an accessible narrative, based on a true story, of a young boy’s struggle to hide, by pretending to be a Pole during the Holocaust. Along the way he is both betrayed and aided by various individuals. The film is one of many of the current crop of Holocaust films that focus on resistance and resilience. It breaks no new ground in terms of storytelling or technique, but is well acted and engaging.

Claude Lanzmann: Spectres of the Shoah (2015) is an Academy Award nominated, short documentary film by British journalist and filmmaker, Adam Benzine. The film is an interview with Lanzmann on the making of his 1985 nine hour documentary Shoah. If you are interested in a behind-the-scenes look at Lanzmann’s fears and motivations about making the film and would like a brief glimpse of his relationships with Jean Paul Sartre and Simone de Beauvoir, and have not read Lanzmann’s autobiography The Patagonian Hare: A Memoir from 2011, then this is a good place to start. Most powerful is his recollection of his search for Abraham Bomba, the Holocaust survivor who Lanzmann was heavily criticized for making him relive his memories by placing him in a barbershop, as he testifies about his experiences of cutting women’s hair before they were gassed at Treblinka.

There is no denying that Lanzmann is a character worthy of a film, or biographical account, and this film will leave you wanting much more. Shoah is available on DVD as of the Criterion Collection, which also includes three additional Lanzmann films and other bonus features. His most recent film, Last of the Unjust (2013), is available on various streaming services. Outtakes from Shoah can be found in the Steven Spielberg Film and Video Archive at the USHMM.

The Criterion discs, available in High Definition and Blue Ray, include a new English subtitle translation, conversations with the director Christian Petzold and actress Nina Hoss, as well as an interview with cinematographer Hans Fromm and a documentary on the making of the film.

Phoenix (2014), highly recommended film dealing with the struggle to finds one’s identity and voice amongst the ruins of Berlin in the aftermath of the Holocaust. The film that takes cues from Hitchcock’s Vertigo to tell the fictional story about an Auschwitz Survivor’s struggle to return to life. Directed by German filmmaker Christian Petzold, who made the notable film Barbara (2012) about a doctor in East Germany in the 1980’s brings us a study on post-war Germany and its reaction to welcoming those who survived the Holocaust back into society.

Jodi Elowitz is an adjunct professor of the Humanities at Gateway Community College in Phoenix, Arizona and Content Consultant for the Center for Holocaust and Genocide Studies (CHGS) at the University of Minnesota.