“No one was a Saint:” The Last of the Unjust, the final words of Benjamin Murmelstein

Who was Benjamin Murmelstein? Why would Claude Lanzmann dedicate over 3 hours to him in his latest film The Last of the Unjust? Murmelstein was a rabbi and teacher from Vienna, third Jewish elder of the Thereseinstadt ghetto, and the only surviving Jewish elder of any of the Jewish Councils set up by the Nazis. Condemned by many in the Jewish Community as a traitor and a Nazi collaborator he was tried and acquitted by the Czech authorities after the war settling in exile in Rome where he lived until his death in 1989. 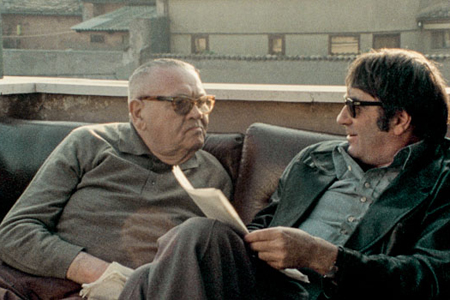 He testified at the trial of Thereseinstadt Commandant Karl Rahm and wrote and published a book of his experiences in Terezin: Il ghetto-modello di Eichmann (Theresienstadt: Eichmann’s Model Ghetto), in 1961. He submitted the book to Israeli prosecutors to use at the Eichmann trial (Adolf Eichmann, SS officer in charge of the deportation of the Jews of Europe) a submission that went unused.

Murmelstein had much valuable information to offer, especially on Eichmann So much so that if Murmelstein’s testimony had been used it would have dispelled any notion of the dispassionate Nazi bureaucrat who only followed orders as defined by Hannah Arendt’s term the “banality of evil.” Instead we would have seen Eichmann as a man who loved his job and pursued it with zeal and passion above and beyond what was required by his superiors. We would also have seen a corrupt man who lined his own pockets with Jewish funds for both personal and professional gain, as the extra money afforded him the financial independence to run his department apart of the bureaucratic machine and away from the eyes of his superiors.

So why is Murmelstein’s story coming to light now and why did Lanzmann wait nearly 40 years to make this film? Possibly the world was not ready for such a controversial and ambivalent figure. In 1975 Lanzmann interviewed Murmelstein for a project he was working on which later became the critically acclaimed 9-hour documentary Shoah. The interviews show that Murmelstein lived in the center of what Primo Levi referred to as the “grey zone” in his book The Drowned and the Saved. Levi’s theory is that those of us who did not experience the lager (camps) and ghettos cannot place ourselves in a position to judge those that were there, nor can we view the Holocaust as something that is black or white, good or evil. We simply cannot know what we would do to survive under the circumstances.

Murmelstein is clear that he was no saint and that he loved power, danger and adventure that went with the job of being a Jewish community leader and later elder.  But he also speaks in terms of the expectations that others had in times that were not ordinary. Murmelstein towards the end of the film tells Lanzmann that in Thereisenstadt there were no saints. “There were martyrs, but martyrs are not necessarily saints.”

Murmelstein points out that many people tried to conduct life as they had under normal circumstances but there was nothing normal about Thereseinstadt, the model ghetto the Nazis had created to fool the world and the Jews imprisoned there about the “Final Solution.” While Murmelstein claims his intentions were to save as many Jews as he could, others viewed him as a tyrant, a collaborator, and a man who only cared about himself. Yet many times in the interviews Murmelstein speaks of the opportunities he had to escape with his family to England and to Palestine, but he remained feeling it was his responsibility.

As the film begins we watch the now 87-year-old Lanzmann read from Murmelstein’s book in Prague, Nisko, and Theresienstadt.  One might wonder if this is an egotistical ploy by Lanzmann, but as the Murmelstein interviews unfold and the 3 1/2 hours go by we realize that Lanzmann has a real affection for Murmelstein, so much so he has become a surrogate witness. Lanzmann has become Murmelstein’s voice, reading passages of his beautifully worded testimony in the places that Murmesltein describes, thus collapsing time, bringing past and present together in the same space, much as he did in Shoah.

Here amidst the past and present we hear Murmelstein in his own words, we are drawn to Murmelstein much like Lanzmann is by his bold storytelling, his intelligence, knowledge of mythology, literature and history.  He seems to be telling the truth about his experiences, admitting to his flaws and the perceptions of his decisions.

The Last of the Unjust will not be remembered as a landmark documentary about the Holocaust like Shoah. Still, it is an important work that represents a different approach to Holocaust documentary. Lanzmann acts as a surrogate witness, in this case representing an extraordinary and at the same time flawed character steeped in moral ambivalence. Lanzmann offers the viewer a much more complex and deeper understanding of humanity during the Shoah by giving a voice to a survivor whose testimony was silenced by those who were not yet ready to hear what he had to say.