Book of the Month: Balkan Genocides: Holocaust and Ethnic Cleansing in the Twentieth Century

Balkan Genocides: Holocaust and Ethnic Cleansing in the Twentieth Century 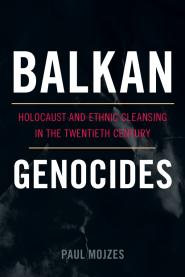 During the 20th century, the Balkan Peninsula was affected by three major waves of genocides and ethnic cleansings, some of which are still being denied today. In Balkan Genocides Paul Mojzes provides a balanced and detailed account of these events, placing them in their proper historical context and debunking the common misrepresentations and misunderstandings of the genocides themselves.

A native of Yugoslavia, Mojzes offers new insights into the Balkan genocides, including a look at the unique role of ethno-religiosity in these horrific events and a characterization of the first and second Balkan wars as mutual genocides. Mojzes also looks to the region’s future, discussing the ongoing trials at the International Criminal Tribunal in Yugoslavia and the prospects for dealing with the lingering issues between Balkan nations and different religions.Balkan Genocides attempts to end the vicious cycle of revenge which has fueled such horrors in the past century by analyzing the terrible events and how they came to pass.