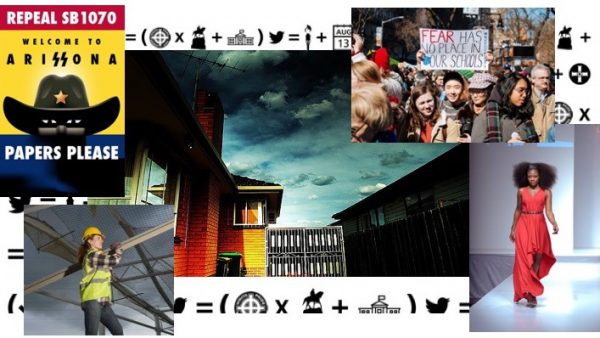 Hello Again! As we wrap up March and move into April, we’ve got social science research on fashion, a look at what makes discrimination trend on Twitter, and the prevalence of “white flight” in America.

“Professionalization in the Working World,” by Jean Marie DeOrnellas. In light of the high rates of turnover in Washington, D.C., we rounded up social science research on professionalization.

“Fashioning Fashion, Creating Couture: Part I,” by Sarah Catherine Billups. We’ve got sociological research on why fashion is a valuable case for understanding social life.

“What Makes Discrimination Trend on Twitter?” by Brooke Chambers. New research in the American Journal of Sociology finds that after the passage of Arizona’s SB 1070 law, people who previously held an anti-immigrant stance posted tweets with greater negative content more frequently.

“Me Too on the Manufacturing Line,” by Jasmine Syed. The New York Times talks to Abigail Saguy about gender discrimination in blue-collar workplaces.

“‘Concerted Cultivation’ and the March For Our Lives,” by Jay Livingston.

“The Algorithmic Rise of the ‘Alt-Right’,” by Jessie Daniels.

“50 years since the LeClair Affair, Is Living Together Outside of Marriage a Problem?” by Arielle Kuperberg.