“To act in solidarity we need to imagine it”: Interview with Professor Carlo Tognato

Carlo Tognato is Associate Professor at the Department of Sociology at the Universidad Nacional in Colombia. He is also Director of the Nicanor Restrepo Santamaría Center for Civil Reconstruction in Bogotá and Faculty Fellow at the Center for Cultural Sociology at Yale University. For over a decade, he worked on cultural economic sociology. Since 2014, though, his research has almost exclusively concentrated on civil reconstruction in postconflict society, thereby taking a more interventive and public turn. 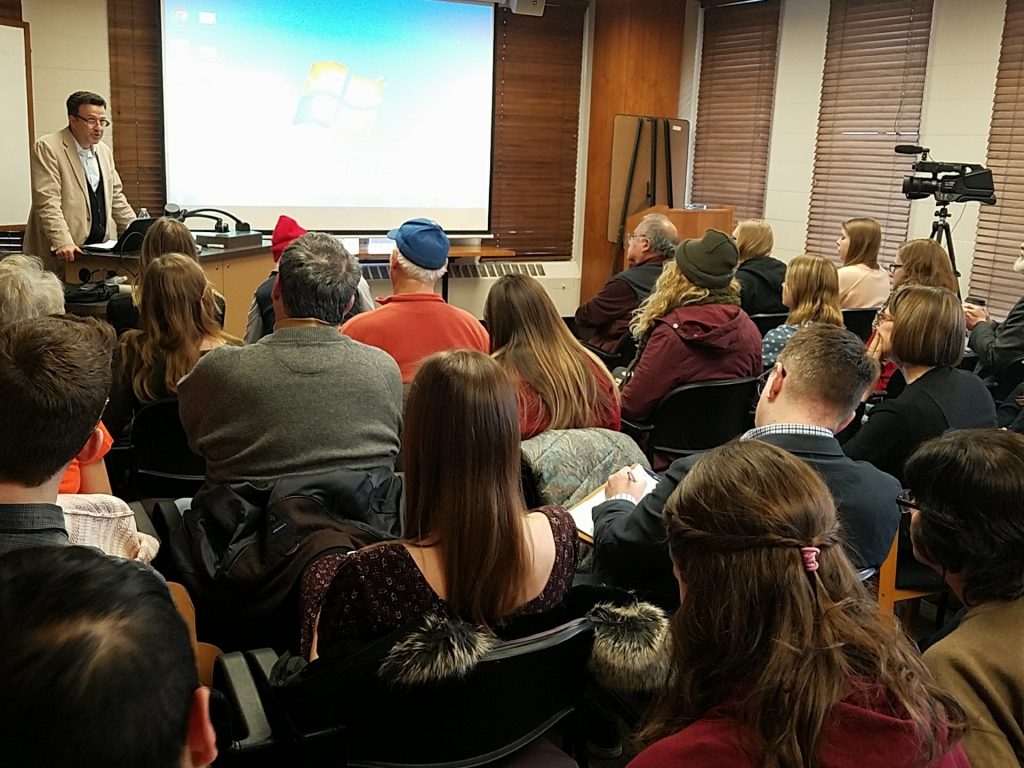 In your presentation on “Narrating the ‘Righteous’ in the Colombian Armed Conflict,” you highlighted that post conflict narratives tend to have a binary focus on victims and perpetrators. You introduced a third category, that of the ‘Righteous.’  What does this mean and why is it important?

The big problem with the victims-perpetrators binary is that it ends up feeding into extreme polarization and deep socio-political divisions. When you are under these circumstances, and you want to solidarize with a person who belongs to another group, then the people within your own group will see the act of solidarity towards people from other groups as an act of betrayal of in-group solidarity.

This has some major implications. If in your own group you have some perpetrators, and you refrain from solidarizing with the victims that belong to other groups, then you are stuck with the perpetrators you have in your own backyard, and with the moral responsibility that comes from accepting it and not doing anything about it.

If, on the other hand, you solidarize with members of other groups that might deserve your solidarity and hence you do the right moral thing, then you have to count on the possibility that people from your own group will start to withdraw their solidarity with you. And this may be quite problematic. After all, as a result of deep divisions and extreme polarization, solidarizing with the victims of other groups will not necessarily translate into receiving the protections granted by that group to its members. As a result, as groups are trapped into their own tribal solidarities, once you cut your solidarity ties with people from your own group, you are left alone. And that is socially a very dangerous place to be.

The category of the ‘Righteous’ in a conflict like the Colombian, extends that of the “Righteous Among Nations” which was born within the experience of the Holocaust. The “Righteous Among the Nations” were non-Jews who, during the Holocaust, were willing to take some risks, and pay even a high price to perform acts of solidarity and generosity. People who were non-Jews were willing to engage in acts of solidarity towards Jews in order to save them from extermination.

Now, such behavior can be found at other times and within other contexts of violence. However, almost regularly the story of these people who do engage in such acts of generosity, against all odds, towards people from the other side are not being told systematically. If we only focus on the victim-perpetrator binary in pursuit mostly of recognition of the suffering of the victims, a step that is necessarily at the core of the cultural work on collective memory in post conflict societies, then we lose sight of the need for integration and for the restoration of the cement of society. In short, we lose sight of the imperative of restoring cross-group solidarity across society.

By analogically applying the category of the ‘Righteous’ outside the Holocaust, the idea of the “Righteous Among the Nations,” we may be in a better position to address the reconstruction of solidarity ties across groups when socio-political differences have been essentialized to the point of being similar to the way racial differences were coded between Jews and non-Jews in Germany in the ‘30s and ‘40s.

Can you tell me a little more about how this narrative might impact different individuals based on their social position, say bystanders, or if they are on opposite sides of the conflict?

The category of the ‘Righteous’ performs a direct interpellation on bystanders that are indifferent to the suffering of the victims or turn a blind eye on them. Generally, when we observe a group of people, it is hard to recognize who are prone to civil indifference and who are capable and willing to activate themselves to mitigate the suffering of others. Game theoretically, we need to  generate a separating equilibrium that allows the latter to come out from every single group of society, mutually recognize themselves and hopefully come together and collaborate. The narrative of the ‘Righteous’ contributed to that. By identifying with the ‘Righteous,’ this latter type bystanders may indirectly signal to each other their willingness to face and resist evil and not to back the perpetrators that their own social group might have produced. At the same time they will not sacrifice their social ties with members of their own groups by identifying with the ‘Righteous’ within their own. Such separating equilibrium, in turn words, comes at lower social costs and hence becomes more feasible.

This, in turn, paves the way to undermining the social base that in post-conflict societies still sustains perpetrators, not because bystanders want to support them, but rather because they are stuck in a prisoner’s dilemma. The story of the ‘Righteous’ gives bystanders from all social and political groups the chance to identify with the positive example set by the ‘Righteous’ at no or low social costs instead of withholding solidarity with victims from other groups and hence being stuck with the perpetrators within their own.

One of the typical defenses that perpetrators deploy, in a war or conflict, or in its aftermath, is to claim that the very nature of war is that horrible things happen. The example of the ‘Righteous’ debunks that. They chose to do and ultimately did otherwise. In other words, people face options. This is extremely powerful, and may inspire other bystanders to overcome their own civil indifference.

This reminds me of a phrase from your talk, “To act in solidarity we need to imagine it.”

Yes, when after a long, internal armed conflict, people have lost the capability of imagining solidarity with members on the opposite front, because they are trapped in the vicious circle of mutual hatreds and recriminations, we need to restore that capability. Telling the stories of those who did engage in those acts of solidarity tells people that the very possibility for that solidarity is not dead. To imagine that possibility, we don’t need a representative sample. The issue is not a quantitative one. The appearance on one’s own horizon of the stories of the ‘Righteous’ who bear witness to that possibility is per se sufficient.

What’s more, it raises questions for the people who are around them, and for those who might not need to run great risks or pay high prices for their solidarity for members of other groups and still they decide to turn a blind eye on their suffering. That is where the category of the ‘Righteous’ is productive.

My sense, though, is that to move bystanders from their indifference by virtue of the example of the ‘Righteous’, we may need to simultaneously tell the story of the ‘Righteous’ who stand on polar opposite of a societal spectrum, either political or social, that is, people on the extreme left and extreme right, people from the opposite ends of the social pyramid, hence from popular strata and elites, or even from the middle class, people from civil society and State, or from the armed forces and the trade unions. We need to weave their stories of solidarity towards the other side together in a criss-crossing pattern for the purpose of showing that zipping the fragments of society together after a war is possible by tapping on to the example of such ‘Righteous’.

You described your project as a “pedagogy for civil courage.” Could you expand upon it and explain more what you mean?

The stories of the ‘Righteous’ set an example and face people with a powerful interpellation: “What did I do in a given situation? What could I have done? What should I have done?”

For instance, German students in 1968 turned on their parents and asked: “Wo warst du?,” “Where were you? Where were you when Hitler and the Nazis did all that?”

The stories of the ‘Righteous’ face bystanders with a similar question, and also provide them with an option to emancipate themselves from the moral weight of past indifference to the suffering of others by identifying with the ‘Righteous’ and by committing to their example at least for the future. That interpellation from the ‘Righteous’ must resonate across schools and universities, in the media, in fiction on TV and cinema: “Wo warst du?,”  “Where were you?  Why were you indifferent when others were not and engaged in acts of solidarity? This can be pedagogically powerful.

Could you expand upon the role of collective memory? You mentioned that it is sometimes seen as a source of division and sometimes of coming together.

If we look at postconflict societies in Latin America or elsewhere, the process of construction of a postconflict collective memory almost regularly focused on the victim-perpetrator binary, thereby feeding into polarization.

In societies where it is more difficult to distinguish between victims and perpetrators, this latter process becomes a daunting task. The stories of the ‘Righteous’ provide a base to converge on a common horizon of interpretation of that past. People can come to identify with the common ground of civil decency in the face of violence and suffering that the stories of the ‘Righteous’ make it possible to bring into focus.

Lastly, you mention that part of your hope that people would be inspired to come onto the project. Could you highlight some specific ways that people could come onboard?

In my talk at CHGS I laid out five lines of intervention that this project on the ‘Righteous’ is currently pursuing. We must lodge narratives about the ‘Righteous’ in journalistic practices, in the aesthetic realm, in the State apparatus, particularly among the public security forces, in education and in memorial museums.

Students and colleagues may contribute by thinking ways of achieving that more effectively or they may join the actual delivery of the interventions from academia along the above-mentioned lines. On both fronts, this provides opportunities for scholars and students who are keen on practicing a more interventive as well as public social science.

Also, you don’t need to be a Colombia specialist to come onboard.

It would be very important to open a line of comparative work addressing the challenge of restoring cross-group solidarity after internal armed conflicts or in the course of dramatic political transitions in other places across Latin America, Africa and Asia, from El Salvador, Guatemala, Chile, Argentina, Peru, and Venezuela to Rwanda, Lebanon, Cyprus, Syria, Iraq, Sri Lanka, Myanmar, just to name a few contexts.

Deploying the category of the ‘Righteous’ may enable us to better bring into focus its potential as well as its limits, and hence it may provide new opportunities to calibrate it, extend it and ultimately adapt it. Every single societal context will inevitably produce its native category of ‘Righteous’. This will enable us to give shape to a global research agenda about civil courage, what feeds it, and how we may cultivate across very different societal contexts. I would think that this could provide useful insights for civil society organizations, foundations, governments, and multilateral agencies around the world that are in the business of democratic consolidation as well as peace-building.

Michael Soto is a PhD student in Sociology and fellow at the Interdisciplinary Center for the Study of Globalization Change (ICGC). His dissertation research is on the transition to peace in Colombia, with a focus on reintegration and reconciliation processes.