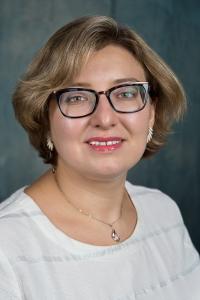 Natalie Belsky is Assistant Professor at the Department of History at the University of Minnesota. Her research interests include migration, minority politics in the USSR, Soviet citizenship, and East European Jewish history. She has conducted research in Russia, Kazakhstan, Israel and the United States. Invited by the Center for Holocaust and Genocide Studies, she recently gave a lecture titled, “Shelter from the Holocaust: Rethinking Jewish Survival in the Soviet Union.” After her talk, Belsky shared more insights with Meyer Weinshel (UMN Graduate Student, German, Scandinavian and Dutch).

The multilingualism central to Jewish life and culture in Eastern Europe is fascinating, especially as it was shifting over the course of the nineteenth and twentieth centuries. Can you speak to how Jews fleeing to the interior of the Soviet Union fared linguistically? Could they continue speaking the languages they knew, or did they have to adapt to their places of exile?

Soviet Jews are a particular case. Before 1939, Soviet Jews were relatively assimilated. But more broadly my research also includes Polish Jews, who had some knowledge of Russian but lived in rather multilingual communities. One of the things that I look at, is the encounter between Soviet and Polish Jews. In some cases, younger Soviet Jews found Polish Jews to be somewhat exotic, and it was difficult to see them as Jews like themselves. Over the course of those twenty years [between the Russian Revolution and the outbreak of the Second World War], the divergence taking place was profound. On the home front during the war, Central Asian languages factored into the equation as well. Jews who only spoke Yiddish, or who did not have the linguistic skills to navigate the Soviet system, faced additional challenges.

What was Jewish life like in Central Asia in cities like Tashkent and Alma-Ata prior to this historical moment?

There wasn’t much Jewish life in these places, and it certainly was not Ashkenazi. There are Central Asian Jewish communities, such as the Bukharan Jews and mountain Jews in the Caucasus, but those are distinct communities. From what we know, some of the Polish Jews that were resettled there interacted with them. However, Bukharan Jews had more in common with local Uzbeks, for example, than the refugees. Ashkenazi and Bukharan Jews come from very different traditions, and [I think] under the Soviet nationality categorization structure they would have been identified differently. There had not been much Ashkenazi Jewish life, however, prior to the war. In the 1930s, in the Republican capitals, there was a multinational Soviet elite, some of whom were Jewish, but they didn’t think very much about their Jewish identity.

You mentioned the different categories of people and how Jews were not always categorized in the same way. How did the categorization of peoples and groups under the Soviets work?

That of course becomes very complicated. The categories most relevant to my project, and what has impacted my research a lot, is that in the Soviet administration and apparatus; all of these people who were not incarcerated but who had fled on their own or were evacuated officially were under this catch-all category of “evacuees,” which is kind of a problematic category in many ways. It’s an odd category that Soviet authorities don’t really know what to do with to begin with, and the word itself was clunky for both refugees and bureaucrats alike. It was not a bad thing to be an evacuee, but it was also not a good thing. The Soviets insisted throughout the war that these people were evacuees, not refugees, because “refugees” were associated with the displaced persons of the First World War, which in turn alluded to the problematic and ineffective policies of the imperial regime.

The Soviet evacuation initiatives were also poorly organized, but this was how they were categorized regardless. The term also applied to a lot of people who fled on their own, and who weren’t formally evacuated by the Soviets, known as “self-evacuees.” I tend to say “Polish Jewish refugees” and “Soviet Jewish evacuees,” but that can also suggest significant differences in experiences, and in some cases there are and in some cases there aren’t. When looking at the meanings behind these categories, it can become very ambiguous, which is also why I tend to use the administrative designations found in the archival materials. But even local authorities were confused as to who these people are and what to do with them, and distinguishing between the many groups of people moving around at the time was difficult. Soviet authorities also did not always collect and record statistics about evacuees’ nationality, and instead focus on where they came from, where they went, their professions, and so on. As a result, it’s difficult to look at Soviet Jewish evacuees exclusively, because their experiences were not necessarily distinct from the experiences of non-Jews.

Did many refugees remain after the war? Or did they return home or migrate elsewhere?

Few remained. Most Polish refugees went back to Poland, because they were repatriated, and most of them ended up in DP camps. If the Polish Jews could get out [of the Soviet interior], they did, and most were eager to return home anyway, and in fact many had not known what had happened in Poland during the war. Many of them had been interned by the Soviets and suffered hardships like forced labor, disease, loss of family, etc. and they had gone through this extremely difficult experience, only to return to Poland to find out what happened to relatives and friends. This is also why we don’t know so much about this story. There was this traumatic journey into the Soviet Union many of them witnessed, only to discover that there was this other traumatic experience [the Holocaust]. And of course many returned wanting to reunite with family members, who ultimately did not survive.

Some Soviet Jews did stay. Most went home. I met somebody in Kazakhstan, who had grown up in Alma-Ata, who said that after the war it was a “Jewish city” well into the postwar era. But she was talking about the elites. This is anecdotal, but shortly after the war when Stalin begins his anti-cosmopolitan campaign targeting Jews (1948), it was her sense that some well-educated professionals thought it was a good idea not to return to Ukraine or Belarus, and maybe stay in Central Asia where they were desired as well-qualified professionals and were out of the path of these campaigns. I think one had to be really smart or lucky to realize what was “coming down the pipe,” but there are already pogroms in Ukraine in 1945 that signalled to some what was to come. Some Soviet republics also wanted to keep these people, so some of them did stay, but it was not a big percentage.

Are there specific challenges that you face researching this topic? For example, I noticed you have undertaken archival research in Russia, Kazakhstan, and Israel; is there difficulty in finding and/or gaining access to these archival materials?

Atina Grossmann [at Cooper Union] has been a flagbearer for the project, looking at what was happening in the Soviet Union, and what was happening with this group of survivors. One of the things she has reiterated is that we need many people working on this [research project], and we need several people simply due to the number of languages and the number of archives involved. There are difficulties with traveling to so many places around the world, and there are institutional histories and bureaucracies to navigate, but there are indeed more materials than I or others working on this can encompass. This is definitely part of the story [the difficulties involved]; the refugee experience was much more common than previously acknowledged.

You mentioned the public did not, until recently, acknowledge these experiences. How is this particular episode of the Jewish past best remembered (or not) today? And what are the implications stemming from that?

There is renewed interest and renewed recognition, but this story wasn’t initially seen as part of the survivor narrative; it was just “something that happened.” And not many people talked about it as a result. Encountering this personally with my own family, three of my grandparents were evacuated, and they were all Soviet citizens. It took me a long time to convince my grandfather to write down his account, because for a long time he thought nobody but me was interested in this story. There was a sense that it was not an interesting story, and even when interviewers came to talk to these survivors, they would be pushed to talk to those who,for example, were in concentration camps instead, because there was this sense that that was the narrative to share. Things are certainly changing a bit now, because the Claims Conference has now recognized Jews who fled to the Soviet home front as recipients of compensation. Many of them are unfortunately no longer alive, but it is important for this community to demonstrate that this experience matters. That kind of formal recognition is important to bringing this story to light.

Are you able to include this research in your own teaching at UMD? Are students receptive to learning about these topics? Are there challenges when teaching on topics that seem less visible in the study of Jewish life before, during and after the Holocaust?

I talk about it only tangentially in my teaching, because I teach relatively general courses. This topic requires a lot of prefacing and it’s difficult to find the time to fit it into a broader course. I am teaching a seminar for the history majors at UMD, and it is focused on migration. I address the issue of displacement, what it looks like, how it affects states, etc. We haven’t talked about this story, but we have talked about the general themes. Nevertheless, my research has greatly affected how I teach the history of the Soviet Union, which is my main specialty. I like to present to students a history of Russia and the Soviet Union that is not just Moscow and Saint Petersburg. There’s this whole other part of the country and the empire, and it is a part of the story often left out. Thinking about Russia in this broader sense, and certainly in a multicultural and diverse sense, many of the challenges we see in the past are still there.

I have also taught courses on the Holocaust, and spent one section of the course discussing refugees. Who they were, where they went, and I was fortunate enough bring someone from the community who was born in Shanghai during the war, who was part of that Jewish community and that story. That worked well, and it showed the students that the history of the Holocaust goes beyond the borders of Europe.

Meyer Weinshel is a PhD student in Germanic Studies at the University of Minnesota. His research interests include Austrian Jewish literature and culture, and the translation of German-language poetry into Yiddish before and after the First World War in Central Europe.

That was the single most great article ive ever read.

Hello Mr. Weinshel your story that you have spoke of is very well thought out and I really like it. I read this article in your mothers ( Jean Weinshel) reading class which I love. Thank you very much.

It was awesome and in great detail and it tells a lot about Jewish life in the old days. It's cool that there is so much about the story, if that's what some people may call it.

I always felt like I was "missing" something. I am able to understand so much more after reading this. Thank you.