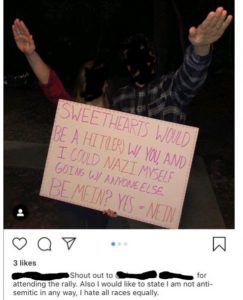 Last week, two students from Minnetonka High School in suburban Minneapolis posted a photo of themselves giving a Nazi hand salute accompanied by an antisemitic sign. This incident is just the latest of a number of similar instances, with photos surfacing from Indiana and Wisconsin showing students giving the Nazi salute. Understandably, each case has sparked calls for more and better Holocaust education in schools. This latest photo prompts the question: what do students in Minnesota’s public schools learn about the Holocaust?

While no such mandate exists in Minnesota, the Holocaust is included in state social studies standards for both middle and high school students. One might reasonably assume that most students in public schools encounter the Holocaust at least once in the course of their education. Indeed, Minnetonka High School leadership, as well as the Jewish Community Relations Council of Minnesota and the Dakotas has reported that Minnetonka students do receive instruction in the Holocaust, and many students had even heard local survivor Judith Meisel speak during the last year. Indeed, Judith (Judy) Meisel also spoke last year with high school students in my comparative genocide and human rights elective course about her experience during the Holocaust, as well as her later involvement in the civil rights movement in Philadelphia during the 1960s. Judy spoke very powerfully about the dangers of both antisemitism and racism. Though a powerful experience for my students, without the context of the history of the Holocaust and other the genocides we’d been studying all semester, I wonder what my students would have taken away from Judy’s talk if it had been their only exposure to the Holocaust. Perhaps, in light of the photos that have surfaced, we should not only be calling for more but better, more purposeful Holocaust education in Minnesota and across the country. Though in the midst of making such calls, we should bear in mind that what’s needed is more robust education on the history of the Holocaust, rather than lessons solely focused on tolerance.

Too often it seems that in classroom practice, the history of the Holocaust is eschewed in favor of lessons that aim to shock or moralize, to instill in students, according to Holocaust education researcher Simone Schweber, “the moral lessons most people want conveyed to students from rigorous study of that history – that racism is abhorrent, that interceding on behalf of the unjustly oppressed is necessary, and that every single person can make a difference in the world.” While, on the surface, these are admirable educational outcomes, Holocaust historian Yehuda Bauer writes that “the Holocaust is too often turned into vague lessons of the danger of hatred or prejudice at the expense of really trying to understand the reasons and motivations for the genocide.” Though it seems an obvious statement, in order for Holocaust education to be effective, it must be done well; students must learn about the history of the Holocaust, its antecedents, the breakdown of the democratic state, the mechanisms of othering and persecution, and its aftermath. It is also important to remember that, even when it is done well, Holocaust education is not a panacea for all of the ills of contemporary society, but it can, in conjunction with learning about other topics, help create more knowledgeable, thoughtful, and tolerant students.

Editor’s Note: For over 20 years, the Center for Holocaust & Genocide Studies has offered world class resources and workshops for educators looking to bring lessons about genocide and mass violence into their classrooms.

This is a very strange behavior of students, antisemitism it os bot good, I think they should not do stupid things, I think that students should concentrate on the educational process and read more books, for example, Shakespeare’s book about Macbeth, a very good book, an analytical essay you can read on our website https://tooly.io/macbeth/. This will help you develop and be recognized in the current situation in the world.

Thanks for sharing more info!