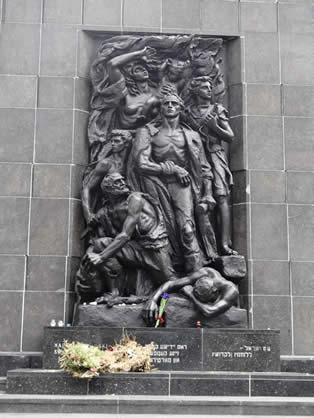 If you have visited Warsaw, Poland, you have seen it majestically rising up from the square, between a Soviet era style apartment complex and the POLIN Museum of the History of Polish Jews. On a sunny afternoon in Warsaw, people sit on benches, read papers, converse and eat lunch; others walk their dogs, or simply stroll along Mordechai Anielewicz Street. The Warsaw Ghetto monument a backdrop to their daily existence, barely noticed.

Politicians and dignitaries lay wreaths, and Jewish visitors leave stones and light Yahrzeit candles. For them, it is a memorial, a way to remember those who fought from April 19-May 16, 1943; who chose how they would die when death was the only option.

For 70 years, Nathan Rapoport’s Warsaw Ghetto Monument has marked the Uprising, first bursting out from the rubble of the ghetto on the spot linked to leader of the resistance Mordechai Anielewicz’s death. From the rubble, a neighborhood has grown around the monument which now faces the new museum dedicated to educating visitors about the thousand years of Jewish life in Poland.

Rapoport, who was Jewish, was born in Warsaw in 1911. He fled in the early days of the German attack on Poland in September 1939, ending up in Soviet territory. He conceived the monument in the immediate aftermath of the Uprising, and was given the commission in 1946 on the basis that he could complete it by 1948 for the fifth anniversary of the uprising, which he did.

The sculpture acts as both monument and memorial. Its duality worked out with the heroic figures of the front embedded into a large stone edifice symbolizing both the wall that segregated the Jews during German occupation, as well as a reference to the Kotel. On the back, a bas relief in the style of Greek processionals, invokes the loss of Jewish lives as they were deported to the death camps in the East.

The mix of styles enhances the narrative of heroism and sacrifice linking both to the Uprising and Israel’s statehood. So much so, a version of the monument was also erected in Israel in 1976. The figures in the sculpture are symbolic references to other revolutionary artworks such as Delacroix’s Liberty Leading the People (1830), frame Mordechai Anielewicz clutching a grenade like a modern day David, a theme Rapoport would repeat when he built a statue to Anielewicz at Kibbutz Yad Mordechai in 1951. Influenced by Rodin and Michelangelo, Anielewicz rises up in both works as the champion of the Jewish people, both in Warsaw and in Israel to mark the efforts of the members of the kibbutz (named for him) who fought the Egyptians in the battle for independence. 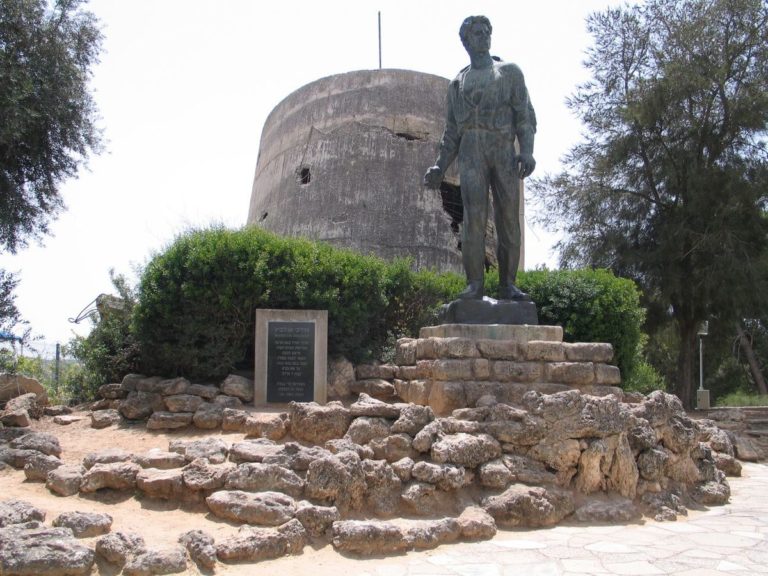 Anielewicz may not have been herculean in stature as Rapoport portrays him, but he certainly loomed large in his commitment to the resistance in Warsaw, and to giving meaning to Jewish deaths at the hands of the Nazis. Anielewicz, born outside of Warsaw in 1919, was a Zionist who led several movements during the War prior to his time in the ghetto. In 1941, he began to encourage and organize an armed resistance movement, which he led until his death during the Uprising on May 8, 1943. His last words written, “The dream of my life has risen to become fact. Self-defense in the ghetto will have been a reality. Jewish armed resistance and revenge are facts. I have been a witness to the magnificent, heroic fighting of Jewish men in battle.”

As we commemorate the 75th anniversary of the Warsaw Ghetto Uprising, we must also recognize Rapoport’s sculpture for it has forever solidified the event in our collective memories, and reinforced the importance and significance the Uprising has played in Jewish history.

This article first appeared on the Holocaust and Humanity Center blog.

Jodi Elowitz is the director of education at the Center for Holocaust and Humanity.