For the past few years, CHGS has been engaged in a research project on newspaper accounts from over 155 years related to the 1862 US-Dakota Conflict.

Through an analysis of more than 400 articles from newspapers of the Twin Cities and from towns in the Minnesota River Valley (Mankato and New Ulm), we trace how different generations of Minnesotans remembered, or in some cases chose to not remember, the six-week conflict itself and its dramatic consequences for the Dakota community. 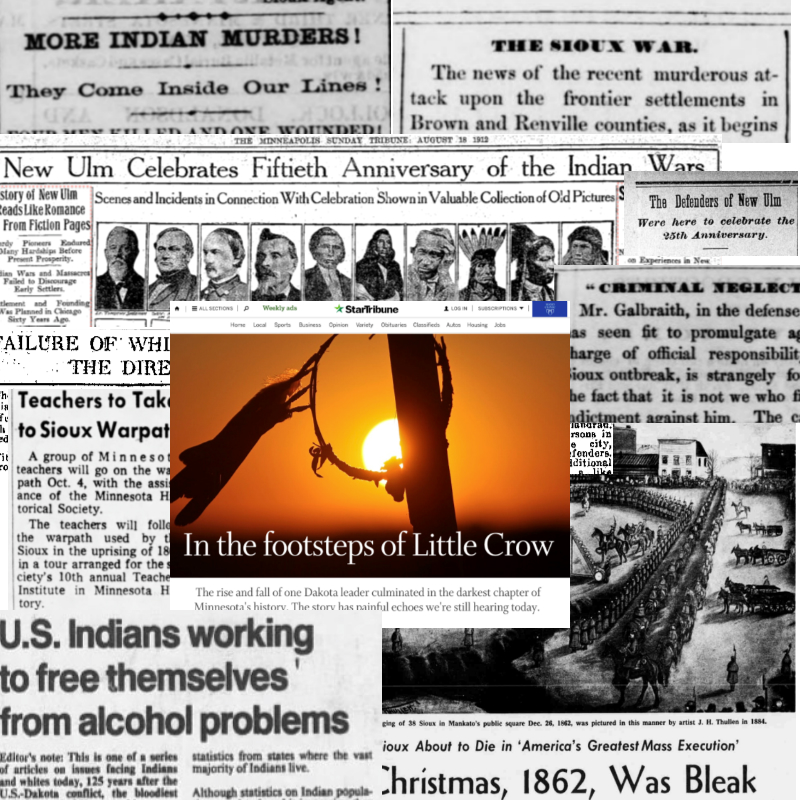 Primary data and analysis helped understand how thinking has changed over time regarding, for example, the causes of the conflict, the attribution of responsibility for the violence, or the way actors involved in the conflict are labeled (“Sioux”, “Indian”, or “Dakota” for example). Further analysis explores references to the conflict in post-sesquicentennial commemorations, including the controversial display of “Scaffold” at the Walker Art Museum last year. Overall, our findings account for progress but also highlight the persistent inequality in access to the shaping of public narratives on the Dakota people, as indigenous sources and voices continue to be rare in mainstream media.

In this regard, this project understands the Dakota Conflict not as a discrete event in time, but as a continuing and evolving conflict over 155 years. Minnesotans have participated in history both as actors, and as narrators (selecting facts, choosing interpretative frameworks, labeling, quoting certain sources), the media being a primary site where history is produced.

After months of coding and analysis, the research team (CHGS Director Alejandro Baer, Sociology graduate student Brieanna Watters, CHGS Research Coordinator Joe Eggers), is now using their data to examine how educators in Minnesota accept, interrogate, or question the available representations of the conflict and the Dakota people.

This project received seed funding as one of the Minnesota Human Rights Labs in 2017 and, this spring, CHGS was awarded a grant from the Minnesota Historical Society in order to develop teaching resources for Minnesota educators based on the data. Next steps involve the analysis of other Minnesota voices (including Native and immigrant communities) in newspapers and other media to better understand how the state remembered this chapter of its past. 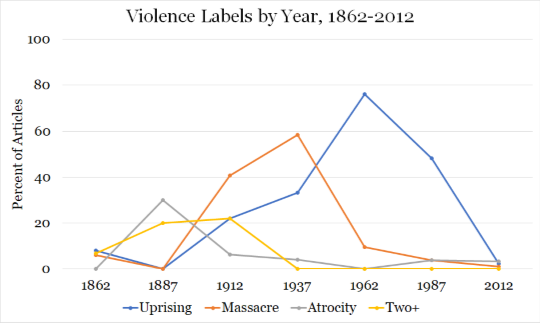 Joe Eggers is the Outreach Coordinator for the Center for Holocaust and Genocide Studies. His master’s thesis explored residential schools as cultural genocide.

From the “Sioux Massacre” to the “Dakota Genocide”: A Sixth-Grade Social Studies Curriculum on the Legacy of the U.S.-Dakota War - Center for Holocaust & Genocide Studies — December 16, 2019

[…] questions were central to a project led by the Center for Holocaust and Genocide Studies’ Director, Professor Alejandro Baer , and […]

[…] the last several years, the Center for Holocaust & Genocide Studies has been engaged in a research project, analyzing newspaper accounts of the U.S.-Dakota War and later anniversaries in an effort to better […]