We will have the thankless task of proving to a world which will refuse to listen, that we are Abel, the murdered brother.
– Ignasy Shiper (historian, killed at Majdanek in 1943) 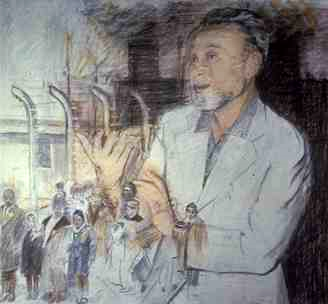 In his acclaimed book Survival in Auschwitz, Primo Levi recounts a recurring dream he and other inmates had in the Nazi death camp: that he returned home to his family and told them about it, but nobody listened. “The person standing in front of me doesn’t stay to hear, turns around and goes away,” he writes.

November 9: A day of infamy or a day of celebration?

chgsumn on November 9, 2014
“If there is such a thing as collective memory,” wrote social anthropologist Paul Connerton, “we are likely to find it in commemorations.” Anniversaries and commemorations declare certain events in history to be worth remembering. They enable states to shape a particular self-image and convey a sense of shared identity among the population.

“The Jews are our misfortune!” (Die Juden sind unser Unglück!). This was always the tag line on the cover page of Der Stürmer, a Nazi weekly tabloid published between 1923 and 1945. The editor of this incendiary paper, Julius Streicher, was tried and sentenced to death on October 1st 1946 at the Nuremberg Tribunal. The judgment against him read, in part:

“… In his speeches and articles, week after week, month after month, he infected the German mind with the virus of anti-Semitism and incited the German people to active persecution…”

Jews, Tutsis and the Paradoxes of Genocide Memory

No nos une el amor, sino el espanto.
(We are not united by love, but by horror)

Since Auschwitz it has indeed been possible to speak of a
German-Jewish symbiosis-but of a negative one. For both
Germans and for Jews the result of mass extermination has
become the basis of how they see themselves, a kind of
opposed reciprocity they have in common, willy-nilly.

The above-cited quotes reveal a tragic irony. The Holocaust has bound forever “Germans” and “Jews” to the past. It has also opened an insurmountable gap that conditions the mutual relationship, as well as the passing on of group identity – of victims and of perpetrators stuck in a permanent position of culpability – to the next generations. Moreover, it perpetuates in time a binary division constructed by the Nazi ideologues: Germans vs. Jews.

The Gasthof scandal: play-acting as Nazis is no innocent game

Last week CHGS and several other centers and departments at the University of Minnesota voiced their concern and condemnation regarding a Nazi-themed dinner that took place in the Minneapolis restaurant Gasthof zur Gemütlichkeit. The Jewish Community Relations Council of Minnesota and the Dakotas (JCRC) and the Minnesota Rabbinical Association (MRA), also responded to this disturbing event and sent a public letter to the restaurant’s owner.

The news and photographs of the gathering – Nazi flags and men clad in SS and Wehrmacht uniforms – were shocking. But even more worrying was to discover how many people, who posted their comments on the Star Tribune website or emailed and voice-mailed the Center, were ready to defend the Nazi re-enactors and the restaurant that hosted the party. Their response reveals an astounding lack of common sense and a failure to understand the gravity of the case.

How “innocent” was this re-enactment? Were the participants and the restaurant owner really unaware of the implications and effects of the symbols they were displaying? One hopes that all of Gasthof’s cards will soon be on the table.

You are not obliged to complete the work, but you are not free to desist from it either.

–Rabbi Tarfon (from the Talmud)

On February 6, as part of the IAS Collaborative Reframing Mass Violence lecture series, CHGS partnered with the Human Rights Program and the Film Society of Minneapolis/St. Paul for a screening of the documentary film Granito: How to Nail a Dictator .  A discussion with its director, Pamela Yates, and producer, Paco de Onís followed.  Granito tells a breathtaking story of courage and perseverance in the pursuit of justice that uniquely embodies the quote above from the Talmud.

The film spans thirty years as five protagonists in Guatemala, Spain, and the United States attempt to bring truth, memory, and justice to the violence-plagued Central American country. A US filmmaker, a forensic anthropologist, a Spanish lawyer, a Maya survivor, and a Guatemalan witness activist each become a “granito,” a tiny grain of sand, adding up to an extraordinary accomplishment three decades after the atrocities: the indictment and trial of ex-dictator General Ríos Montt, former de facto president and responsible for a genocidal campaign that killed thousands of indigenous Guatemalans during the bloodiest phase of a war against the leftist guerrillas in 1982-1983. On May 10, 2013, Ríos Montt was convicted of genocide and crimes against humanity. It was the first time a former head of state had been found guilty of genocide by a court in his own country.

The last chapter of this Guatemalan story is yet to be written. Only ten days after the ruling, the Constitutional Court of Guatemala overturned the conviction under pressure from an organization representing the country’s deeply reactionary oligarchy.

Still, the judgment marked a turning point in Guatemalan history, and it has also become part of the history of human rights. It sends a clear message to other parts of the world where present or former perpetrators still live in freedom and privilege despite proven involvement in atrocious crimes. It also teaches an important lesson: As a collective effort, step by step or “grain by grain,” even in Guatemala-one of the most profoundly unjust societies in the Americas-justice can be achieved.

On Good and Bad Memory

Can memory be a bad thing? Readers must have stumbled over a recent headline that said, “Plan to open a new Holocaust Museum in Budapest faces criticism – from Jews.”Isn’t creating such a museum, as any other project that raises awareness and educates on the Holocaust, always something praiseworthy?

Antisemitism in Europe: not only a phantom of the past

An extraordinary international exhibit is touring Minnesota this month: Lawyers without Rights. Jewish Lawyers in Germany Under the Third Reich. The display was created by the German and American Bar Associations and was brought here as an outreach initiative of the Federal District Court of Minnesota. The exhibit reflects a time in Germany when individual rights and the rule of law were systematically disregarded.   more...

The Priebke Case: It’s never too late for justice

Last June, the allegation that a 94 year old Ukrainian immigrant living in Northeast Minneapolis could have been a top commander of a Nazi- SS lead unit, received international media attention. The public’s response was polarized as for as many who felt justice needed to be served there were just as many who felt that we should leave him alone.  Should a person’s chronological age prevent them from being accountable for their crimes? more...