Bondsy and the Modern Myth of Barter

In the first chapters of every Economics 101 textbook there’s a misleading hypothetical about the origins of money. David Graeber, in his book Debt: The First 5,000 Years calls it “the founding myth of our system of economic relations.” This myth is so pervasive that even people who have never taken an Economics 101 class know, and believe in, this myth. We tend to assume that before money there was this awkward barter system where you had to keep all your chickens and yams with you when you went to market to buy a calf. If the person selling the calf didn’t want chicken or yams, no transaction would take place. Money seems to fill a very important need: it lets us compare and exchange a wide variety of goods by establishing a common metric of value. The problem with this construction—of simple barter being replaced with cash economies—is that it never happened. That’s what makes Bondsy, an app that let’s you effortlessly barter with a private set of friends, so interesting: It takes a modern myth and turns it into everyday reality. What has existed for centuries, according to Graeber and other anthropologists, are debt and credit systems utilizing some sort of value measurement. Some societies might measure the value of objects in terms of other objects (e.g. clams, feathers, buffalo skins, beads) but those are measurements, not actual bartered objects. They act more like money than barter. There are far too many different credit/debt systems to generalize accurately but lots of them operated on the premise that gifts carry some promise of reciprocation. Stiffing your neighbors was a good way to starve to death unless you were totally self-sufficient. 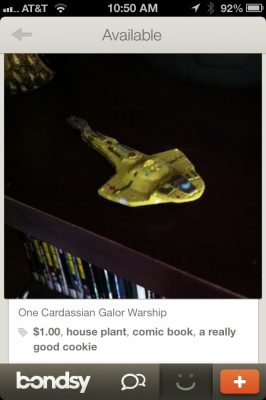 Currencies are a good way of making transactions among people you don’t know or actively dislike. It settles debts quickly and efficiently by offering a common object that can be exchanged later on. That is why throughout history, currencies generally show up just after armed conflict. Currencies aren’t for friends, they’re for enemies. Again, Graeber:

Gold and silver coins are distinguished from credit arrangements by one spectacular feature: they can be stolen. A debt is, by definition, a record, as well as a relation of trust. Someone accepting gold or silver in exchange for merchandise, on the other hand, need trust nothing more than the accuracy of the scales, the quality of the metal, and the likelihood that someone else will be willing to accept it

Enter Bondsy. The app lets you find friends on Twitter and Facebook but it doesn’t rely on either to build your in-app profile. You cannot “sign in” to Bondsy using any other social networking service, which is interesting for reasons I’ll get into later. Once you build a simple profile, (name, photo, email, and location) you are ready to start bartering. The app lets you take a picture of what you’re willing to part with, and lets you list a series of things (including cash) that you’re willing to take in exchange. Instead of putting your extensive collection of licensed Star Trek Micro Machines starships up for sale on eBay where some stranger might give them to an unappreciative brat that will never fully understand the utopian vision of Gene Roddenberry, you can put them on Bondsy and trade them with a friend that you know Gets It.  In exchange you might get a houseplant, a nice cookie, or maybe a hug.

Bondsy is a really fascinating concept because it encourages people to think differently about the value of their material possessions and what it means to no longer fully possess them. Selling a couch on Craigslist means it’s gone from my life forever, bartering it on Bondsy means I’m probably going to see it again when I go to my friends house: The binary ownership model of “have” and “have not” dissolves into a spectrum of sharing, visiting, and lending. Material goods have ordered social relations for centuries and the sort of asocial “its mine and no one else’s” mentality that characterizes modern consumption patterns is only a recent invention. Capitalism mystifies and separates the delicate and complex relationships between humans and material objects.

Karl Marx observed that we tend to think of exchange value as some sort of natural, objective phenomenon. Once a price is stamped on a commodity we tend to mistake that number for the whole and total value of that object. This commodity fetishism lets us exchange goods and services very easily, but it also obscures very important social relations like the value of an individual’s labor or the simple fact that different objects mean different things to different people. Marx said that stamping simple prices on commodities creates “material relations between persons and social relations between things.” I can easily compare the amount of labor (a social relationship) that went into any two objects by looking at their prices, but the only relationship I have to those laborers is the objects themselves. Bondsy doesn’t do much to connect me to the factory workers that build my things but it does get me thinking about the value of things outside of their sticker prices. I have to decide whether or not my once-worn shoes are equal in value to a power drill. I might look up the going price of either object, but that’s only part of my calculus.

The decision to not tie Bondsy to existing social media platforms is incredibly important. According to VentureBeat, Bondsy inventor and CEO Diego Zambrano “didn’t trust the way other companies managed their privacy settings.” He expects his app will “directly change what people share” and “how open people are.” These quotes sound like just about any other Silicon Valley entrepreneur that wants to redefine human behavior and acceptable norms, but I suspect Zambrano’s case is much different. Last November Nathan and Whitney wrote a post about what Silicon Valley means when they say “Social.” Capital S Social

…is what Silicon Valley Capitalists usually mean when they use the term “social”: interactions that are measurable, trackable, quantifiable, and above all exploitable. Whereas much (but not all) of social is nebulous and difficult to force into databases, Social can be captured and more effortlessly put to work. Thus, behavior Social to the degree that it is easily databaseable.

Lower-case “social” is the much broader term with a dictionary definition. It refers to anything relating to society and its organization: ranking and status within groups, companionship, and engaging in activities with others. Nathan and Whitney warn:

It is a mistake, however, to think either that you can separate Social from social or that Social is interchangeable with social. Without social there simply is no Social. Said differently, all Social is social, but not all social is Social. [Easy!]

Bondsy is definitely the kind of Social that is also social. It has the potential to radically disrupt conventional notions of value and exchange. No single invention is going to unseat commodity fetishism, but something that encourages a widespread change in everyday practice could make it harder to believe. Bondsy affords a new way of looking at commodities’ value by reasserting the social nature of objects. It gets you thinking about how material objects enter into our relationships with others and what their value says about those relationships. How does my neighbor’s cooking compare to my old copy of American Gods? How many beers does it take to convince my cousin to clean my bathroom for me? As The Next Web’s Harrison Weber wrote, “Bondsy becomes an entertaining way to foster deeper connections with the people you know.”

As Science and Technology Studies scholar, I am sensitive to what is not built into inventions. So when Zambrano says, “What is interesting about leaving Bondsy open and not very structured is that we allow our users to define how they want to use it,” I immediately start thinking about what kind of “open” Bondsy constructs. In other words, what kinds of assumptions about barter and trade are built into Bondsy? After looking at all of the press (e.g. The Verge, Fast Company, The Next Web) and trying out the app myself, I don’t see much effort put into letting me record or bank debt and credit. Bondsy seems to reify the mythical Econ 101 barter system that never existed. There’s an implicit assumption that trades are one-off transactions of equally valuable goods. What if I want to intentionally trade something of greater value so that my friend still owes me? The app might have a history feature but it isn’t advertised. In some (maybe even most) cultures, such a feature would be so fundamental to barter that to not tout it would be as inconceivable as not mentioning the fact that you can post pictures of your item.

It will be interesting to watch Bondsy add features and evolve as a platform. The various affordances and capabilities of everyday technologies are a nice way of looking at what are otherwise abstract and intangible aspects of society. An iPhone app that aids in barter will inevitably say something about who users trust, what they are willing to share and trade, and what they value as a community. Bondsy would certainly look different in a pre-modern gemeinschaft society where you are born with most of your social status and relationships already decided. Bondsy doesn’t assume that you’d rather trade with people near you, people with a different last name, or people that wear a special kind of hat. Again, these are all things that might be possible with the current incarnation of Bondsy, but they would be absolutely essential to a culture different from our own. The only thing that might say more about ourselves than the things we trade, is how we trade them.

David is on Twitter @da_banks and Tumblr. He’s also waiting for someone to trade with him on Bondsy. Username: davidbanks

Thank you for this article. This sounds like a fascinating app--at least conceptually if not entirely in practice yet. I'm going to check it out just as soon as I hit send on this comment.

I have been thinking about apps that might be interesting to use in teaching anthropology. I'm wondering if I could get a class on Bondsy and then have them trade with one another. It might be an interesting exercise paired with readings about gifts, commodities and the social life of things--or, as you do here, with a useful discussion of the enclosure and commodification of the social web.

[...] on mediated emotions as she graduates, buys a house, and preps to move; David Banks looks into Bondsy and the possibilities of a real barter economy; Whitney Erin Boesel pretends to be Nathan Jurgenson [...]

No one has ever held that there was ever 'an economy based on barter'.

The propositions have nothing to do with each other.

You aren't, you are just falling for Graeber's representation of 'what everyone thinks'. In fact points like 'Currencies aren’t for friends, they’re for enemies', that cash economies never replaced "barter economies", etc. can be found in any classical author; they are emphasized again and again Marx for example.

[…] of measuring value at all. Does everything need to be assigned a specific value, or are there radically different ways of exchanging goods and services? Can our digital connections afford new ways of trucking, […]

[…] on mediated emotions as she graduates, buys a house, and preps to move; David Banks looks into Bondsy and the possibilities of a real barter economy; Whitney Erin Boesel pretends to be Nathan Jurgenson […]