The Cassoulet Saved Our Marriage: True Tales of Food, Family, and How We Learn to Eat 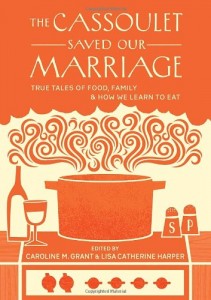 I begin this review with a confession: I live in Brooklyn, the east coast outpost of the current “foodie” movement. I live in a rapidly gentrifying neighborhood, have a plot in my local community garden, and shop at farmers’ markets. I try to cook seasonally appropriate meals, bake without refined sugars, and eat a lot of kale. I am white, of middle-class origin, and (very) over-educated.

Why do I tell you all this? I begin with this description because the majority of the stories in The Cassoulet Saved Our Marriage are told from a specific location. It is an urban place, one full of farmers’ markets and locally-grown produce, of cage free hens and grass fed beef, of organic baby food and school cafeterias with yogurt bars (yeah, I was floored by that last one, too).

It is also a place where food is central to our lives. Indeed, few things in life are more personal and, as such, many of the stories in the collection exude such lovingness in their descriptions that I was extremely moved – and hungry! (In this sense, the fact that each short essay is accompanied by a recipe is a lovely feature.) I was particularly touched by Aleksandra Crapanzano’s essay on how appealing to the memories of food’s pleasures was way to forge a deep and meaningful relationship with her husband’s great-aunt. Elrena Evans offers an honest and brave reflection on coping with her young daughter’s “selective eating” after her own struggles with an eating disorder. Karen Valby’s essay on her mother’s struggle with manic-depression and the resulting chronic hunger of her childhood, reminds us not to assume that all suburban households are bastions of food abundance. Deborah Copaken Kogan and Paul Kogan, in the essay from which the title of the book was taken, offer a poignant reflection of how, over the course of a long-term relationship, gathering around food comes to symbolize much more than sustenance.

The book is divided into three sections, reflected in the title itself: food, family, and learning to eat.  That said, many of the essays cover all of the themes rather beautifully, and the thematic breaks seem to exist more for the sake of readability (though the last section – “learning to eat” is more highly focused than other sections on authors’ children). The essays themselves are all of a quite readable length, particularly for someone used to the essays in academic tomes. I found myself passing through several essays in quick succession. On the wittiness spectrum, I particularly enjoyed Jen Larsen’s piece “Food Hater,” Lisa McNamara’s “Pie-Eyed,” Melissa Clark’s “Rachel Ray Saved My Life,” and Phyllis Grant’s “Recipe.”

It is disappointing, however,that the collection is lacking in diversity of perspectives. The edited volume features only two people of color and one openly-gay author. In a land where one father decries his children’s lack of taste for foie gras and another describes PTA fights over food choices with dismissive hilarity (though I did deeply enjoy Edward Lewine’s essay) – what of parents in schools in which the majority of students receive food assistance and there are no yogurt bars in the cafeteria? Including the perspectives of people speaking from multiple locations would have deeply enriched the collection. As it stands, The Cassoulet Saved our Marriage  will most resonate with those located in the privileged places described at the start of this review, including, of course, my own beloved neighborhood in Brooklyn.

In the final chapter, author Thomas Peele recounts several meetings with San Franciscan chef Dennis Leary. Here, Peele describes Leary’s approach to food as one in which “[f]ood … is not an end to itself. It’s a beginning, a starting place.” And so I hope it is with this collection – a starting place from which other collections that cover the diverse experience of and perspectives on food will spring.

Gwendolyn Beetham is an independent scholar living in Brooklyn, New York. She currently manages the column “The Academic Feminist” at Feministing.com and is a regular contributor at the University of Venus. She has a PhD from the Gender Institute at the London School of Economics. Follow her on twitter @gwendolynb