Environmentalists for a Path to Citizenship: A Lesson on Discourse

In April The Sierra Club announced that it was endorsing a path to citizenship for undocumented immigrants.  They argued that a preponderance of disempowered workers in some of the most polluted industries in the country was bad for the environment:

To protect clean air and water and prevent the disruption of our climate, we must ensure that those who are most disenfranchised and most threatened by pollution within our borders have the voice to fight polluters and advocate for climate solutions without fear.

This position nicely brings together one lefty political concern (the environment) with another (concern for undocumented immigrants).  This is probably entirely genuine, but it is also very convenient from a discursive perspective.

I tortured my Sociology 101 students this semester with the phrase “discursive opportunity structure,” which I introduce as “the arrangement of ideas in a society that constrain and enable communication and thought.”  For example, the connection between pink and femininity is automatic in our minds whether we want it to be or not, just as the letters C-A-T conjure up a cat and we couldn’t stop it if we tried.  So ideas aren’t just free floating in our collective minds, they’re built into a relationship with each other, and those relationships are part of our cognition. 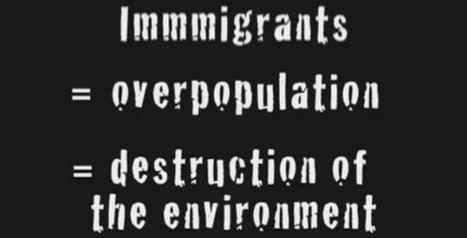 King argues that the population stabilization movement has struggled largely because the two positions they bring together — pro-environment and anti-immigration — disrupt the discursive opportunity structure.  First, it’s harder for us to get our minds around the argument because it means bringing together a lefty political message and a right one.  Second, insofar as our identity categories depend on the discursive opportunity structure, it requires us to fragment them. Can one be both anti-immigration (on the right) and pro-environment (on the left)?  It takes cognitive work to think that through.

The position announced by The Sierra Club last month, however, neatly fits into our thought patterns.  Most fans of the environmental organization are on the left, so when the press release calls for a path for citizenship, it slips neatly into the political identities and cognitive structures of their audience.  That likely facilitates the likelihood that their position will be both heard and influential.

Heard, certainly. But influential, necessarily? If these two positions are held by roughly the same group of people, it doesn't seem like their audience would be available to be swayed. Preaching to the choir, in other words.

"It takes cognitive work to think that through."

And therein lies the problem for too many people.

The fact that most migrant farmworkers are not citizens makes it easy for farmers to deny them the individual and collective voice necessary for the reporting of poisonings caused by indiscriminate and improper use of pesticides that also damages the environment.

I like it! Left and right are like languages. If you say something lefty with something righty its like mixing french and german. You won't make sense to people.

It explains a lot. like why non-feminist arguments are treated as if they were nonsense by feminists when they adopt the same terminology to talk about the problems of men. (MRAs)

Environmentalists for a Path to Citizenship: A Lesson on Discourse » Sociological Images | JLMiller'sNotes — May 30, 2013

[...] via Environmentalists for a Path to Citizenship: A Lesson on Discourse » Sociological Images. [...]

There's also the issue that nationalist "population stabilisation" activists are full of it. The environment doesn't respect national boundaries, it exists on the entire planet. Therefore, what is to be gained for "the environment" from denying basic rights to migrant populations? It's not like people disappear from the biosphere once they are labelled illegal and deported, they just shift their environmental burdens (and sometimes contributions) over a line that's meaningless in the true environmental sense.

King's might not be the best example to illustrate a schism in discursive opportunity structures, as the reason that this position is seen as discursively contradictory is not just because of a left/right divide, but because it ignores basic science and is dumb as hell.

This relies, though, on a very particular understanding of "left" - it's US-centred ideological clustering, rather than a description of the content/logic of the ideas. That is: the idea that fighting environmental destruction is per se a leftist idea is because it's associated with leftist/ish groups in the US.

These battle lines in turn have been drawn because of the implications this course of action would have for capitalist organisations, vs. where the effects of environmental destruction are felt (amongst the poorest, largely). Which, sure, are good bases for describing left vs. right.

However, the understanding the "population stabilisation" advocates have of environmental destruction is very distinct from this, and profoundly right-wing: it posits destruction not primarily as the effects of ruling class actions, with opposition to it necessarily focusing on this class, but as the result of too many (ordinary/poor/racialised) people. Even the concern for its effects are largely not on leftist grounds - rather than prioritising human welfare (something that's pretty difficult to do when the courses of action you propose imply brutal measures against populations - which again, in practice, tend to actually fall largely on poor and racialised populations), it's often in the form of a concern for the planet per se, which if anything is an appeal to a more absolute, less democratic figure than even those of standard right wing fare.

In other words, the Malthusian vileness of "population stabilisation" isn't some combination of left and right -- it's right-wing, even quite significantly fascist, through and through.