A few years ago, I was a teaching assistant for an introduction to sociology course that structured every reading and lecture around exploring the idea that social class determines life chances. Reading the TSP special article Environmental Inequalities, by Hollie Nyseth Brehm and David Pellow, reminded me of what a powerful and simple framework that is to introduce new students to the discipline of sociology or discussions about social inequality in general.

In the article, Nyseth Brehm and Pellow tackle the issue of environmental injustice by looking at how low income people, immigrants, people of color, and indigenous communities are much more likely to live near a major environmental hazard. Dismissing the idea that this is an “environmental” problem, they explain that it is instead rooted in broader economic, political, and social inequalities that are imbedded in our social discourses, structures, and institutions. The people who live near these hazardous areas face profound risks: for example, pollution from two coal-fired power plants in Chicago is thought to be responsible for 42 premature deaths, 66 heart attacks, and 720 asthma attacks each year. Many more environmental hazards like this exist across the country and world.

This article would be a terrific way to introduce students to discussions on inequality, environmental policy, or climate change. But it would also be effective as part of a class that seeks to expand students’ understanding of the relationship between social class and “life chances”—or the odds that an individual will obtain the resources and opportunities necessary for a long and successful life.

There is tremendous evidence that the life chances of the poor in the US suffer in comparison to the wealthier strata of society. Wealthier individuals have increased educational opportunities, income earning potential, and employment prospects—all elements of living a successful life. But the evidence also suggests something more alarming: a host of studies have posited a relationship between class and mortality directly. Put simply, poor people in the US have lower life expectancies than their wealthier compatriots. There are a variety of mechanisms though which this inequality comes about: for instance, poor people may have less access to quality medical care and nutrition, in addition to a higher risk of occupational hazards (e.g. black lung or injuries from heavy machinery). Furthermore, as the article discusses, the poor disproportionately live in close proximity to environmental hazards that threaten their health.  Below are a few examples that you could draw upon to make these points in class.

Class and Life Chances in Disasters

Expanding this discussion to Hurricane Katrina and other more recent disasters would further the discussion, guided by the following questions:

There are untold other topics in this line of discussion—including on the relationship between social class and incarceration, illness, death in war, and crime (selected readings on these subjects are listed below). At this point it would be useful to bring in Nyseth Brehm and Pellow’s article to emphasize to students that even in a less “extreme” scenario, the relationship between social class and life chances is a defining feature of our social world that must be analyzed seriously.

The following discussion questions might be useful when discussing this article:

To deepen the discussion about the relationship between social class and life chances, a variety of subjects and articles might be introduced. Below are several readings to get the discussion going:

On the link between social class and death in war:

On the link between social class and health/life-expectancy:

*Marie Berry is a graduate student in the Sociology Department at UCLA. Special thanks to Maurice Zeitlin for the inspiration for this post.

As the holidays draw near, it seems fitting that several of this week’s citings were about toy stores.  One of the citings, found here, was about a Swedish company that is working to eliminate gendered toys. The other, found here, focused on class and toys.

Below is an expanded version of a related activity (that we posted about briefly in the past).  This activity focuses on gender and toys, but you could also include class and toys (or ask the class to read the second citing listed above as part of the discussion after the activity).

Go to a local toy store or department store, and bring something to take notes. While you are there, take detailed notes about the following:

Every semester I use an activity from the journal Teaching Sociology to teach about class inequality.  The article describing the activity can be found here.  The authors, Catherine L. Coghlan and Denise W. Huggin have designed a game that really helps students understand the difficulty of class mobility.

I don’t want to say too much about the activity (don’t want to risk copyright laws or plagiarism) so, instead, I’ll leave you to read the article on your own.  What you should know, however, is that in all of my evaluations my students (Introduction to Sociology and Social Problems) cite this as one of the most useful activities they have ever had in a college classroom.

With Earth Day fast approaching, we’re seeing more stories about climate change (for example, see this sighting) and other environmental issues.  While there are many ways to study our environment sociologically, courses about environmental justice are becoming more popular.  Here we share a syllabus graciously provided by David Pellow at the University of Minnesota.  The description for his course, Race, Class, and the Politics of Nature, is provided below.  You can download the syllabus here:  Race, Class, and the Politics of Nature.

The phenomenon known as environmental racism has made headlines during the last three decades, in large part because the movement for environmental justice has placed this issue on the public agenda. This course introduces students to the theoretical and historical foundations of environmental racism and environmental inequality. We will examine and interrogate both the social scientific evidence concerning these phenomena and the efforts by governments, residents, workers, and community activists to combat it. We will consider the social forces that create environmental inequalities so that we may understand their causes and consequences. We will also consider ideas and practices that may lead to (1) a more equitable social distribution of the costs and benefits of markets and (2) more ecologically sustainable forms of production and social organization. Students will be expected to master several social scientific theories and concepts related to the subject matter. In particular, we pay close attention to the ways in which the concept of race intersects with gender, class, citizenship, indigeneity, and nation in order to better understand how systems of power and inequality are constructed, reinforced, and challenged. 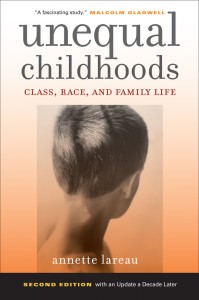 Featured on The Society Pages last week was an edited interview with Annette Lareau conducted last year by Jack Lam (sociology graduate student at Minnesota) and I on her updated edition of her famous book Unequal Childhoods (University of California Press).

You can listen to and download the entire interview from Office Hours.

We highly recommend using this book in your classes: check out our post on a possible class activity to tie in with the book.

Even if you don’t assign the whole book, we recommend referencing her updated findings. Lareau’s important arguments are essential to any discussion on childhood, education, and class.

This week, we highlight the article Families Facing Untenable Choices by Lisa Dodson and Wendy Luttrell in the Winter 2011 issue of Contexts. The article asks important questions without easy solutions. We recommend using this article in your class to encourage students to explore the hidden ironies of combining working and parenting among low-income mothers.

Before class, have students do a thorough reading of the article and outline the problems faced by low-wage mothers that appear in this article. Then, have them answer this question on their own in class before having a group discussion about the article:

Why are low-income mothers in a lose-lose situation when it comes to being mothers and workers? This article would be paired well with the article highlighted last week “Children” Having Children by Stefanie Mollborn in the same issue of Contexts.

In addition, we suggest having students listen to the  Lisa Dodson, Wendy Luttrell and Stefanie Mollborn talk about low-income and teen motherhood in an interview with Office Hours on The Society Pages. Check out this article from the Summer 2007 issue of Contexts: “Global Corporations, Global Unions” by Stephen Lerner and use the following questions and activity to easily integrate it into your class.

1)   What benefits do unions bring to workers and employers? Can you think of any drawbacks?

2)    How does globalization represent both a threat and an opportunity for low-income workers?

3)    What does “the race to the bottom” refer to? How does it affect economic stability and working conditions at local, national, and international levels?

Check out  www.seiu.org. How does this union impact your
understanding of the potential benefits and challenges of global unionizing? Taxes are a controversial, interesting issue to cover in class that allows you to link sociology to current events.  Almost everyone has an opinion, but people know surprisingly little about taxation in the United States.  “Tax Myths” by Lane Kenworthy examines many commonly-held views of taxes and explains that a number of things citizens and policymakers think they know about taxes are wrong.

Here are some questions that could be used with the article:

1) What are the tax myths covered in the article?

2)    Choose one tax myth that particularly surprised you. Why do you think that you, and many other Americans, believed it?

ACTIVITY: Chart a day in your life and show where taxes affect your daily routine. For example, your taxes help pay to enforce environmental regulations that protect your drinking water.

**You could also use this article to discuss current events in Wisconsin as well as with the national budget.**

We recommend using this intriguing article about an impoverished shantytown in Buenos Aires that has been horribly polluted by a Shell oil refinery: “Amidst Garbage and Poison: An Essay on Polluted Peoples and Places” by Javier Auyero and Debora Swistun (Contexts Spring 2007)

To discover how the children of this town feel about living in such a place, the authors give children disposable cameras with the instruction of photographing places and things they consider ‘good’ and ‘bad’ in the town. The article also poses the question of what responsibility corporations have to the people whose towns they pollute or destroy.

This article would work well in a lesson on inequality, environmental racism, corporate ethics, capitalism or methodologies. Use the questions and/or the activity below to get a discussion started on this topic: 1)    How did it make you feel to learn about how the people in Flammable live? What do you think could be done to improve their situation?

2)    Describe how capitalism in the U.S. affects people in Flammable. Do you think that Shell-Capsa has a responsibility to the people of Flammable? Why or why not?

ACTIVITY: Take three photographs of sites in your neighborhood or city that you think exemplify environmental inequality and share them with the class. Why did you choose these sites and what do you think they say about your city?

This assignment should be used after students read “How Schools Really Matter” by Douglas B. Downey and Benjamin G. Gibbs (found in the most recent issue of Contexts).  The article would also work great paired with excerpts from Annette Lareau’s Unequal Childhoods. For example, it could be paired with the first 10 pages of the book.

Once students have read these two pieces, assign a short reflection essay as homework or as an in-class reflection  Potential directions include the following:

In this short response, you should reflect on your childhood.  Develop a list of the resources you had in your household and the extracurricular activities that you were enrolled in (both through school and outside of school).  Think about how these various resources contributed to your intellectual development.  Did your parents have a very “hands-on” (concerted cultivation) approach or were they more “hands-off” (natural growth model)?