Understanding the Causes of Genocide

Our own Hollie Nyseth Brehm recently wrote a special feature for TSP entitled “The Crime of Genocide.” The 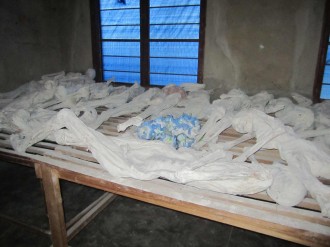 article is a short and concise summary of the conditions that can lead to genocide, as identified by social science research. This would be a great article to use in a course on crime, as criminologists have largely neglected the study of genocide. It’s a great introduction to the topic!

A few questions to get the discussion going:

1. What does the word genocide mean and how did the word come to mean what we understand it to mean today?

2. Why have genocides generally been ignored by criminologists? What do they have in common with other types of crime more often studied by such scholars?

3. What does the metaphor “genocide doesn’t come like rain” mean? Why is this the case?

4. How do psychological and individual factors matter (or not matter) when trying to understand which people become perpetrators of genocide?

5. How can the government and characteristics of the state play a role in encouraging genocide? (The author gives several reasons. List them all.)

6. How can the international community play a role in preventing and stopping genocide? How do connections to other countries matter?

Kia offers a useful set of questions to accompany Holly's article. To these I would add a set of questions derived from the late Irving Louis Horowitz's Taking Lives: Genocide and State Power (2002), which he characterizes as “the highest and thorniest issues that remain to be examined in genocide studies.” They include, but are not limited to: (1) an examination of the relationship between genocide, on the one hand, and civil strife, ethnic conflict, and warfare, on the other hand; (2) the need for a more exacting specification of the “distinction between major genocides” and those that can legitimately described as “Holocausts”; (3) explaining why some totalitarian regimes, such as Hitler’s Germany, commit genocides, while other regimes, such as Mussolini’s Italy, do not; (4) ascertaining the degree to which international law is “an operational reality or a fiction” when it comes to responding to genocides; and (5) evaluating the acceptable means of outside intervention for terminating genocidal regimes—-for instance, “can the bombing and decimation of an ‘evil’ regime be viewed as a good, without regard to the damage inflicted on the innocents of the offender nation?”