The following is another guest post by our own Kyle Green who is teaching Sociological Research Methods this semester and has generously shared teaching activities with us. Thanks Kyle! 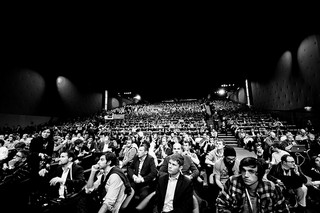 During the height of election season (or doldrums depending on your view of the political spectacle that descends upon our country every four years), I shared a teaching activity that had gone well in my large research methods class. The only problem is that the activity loses some of its luster during the three years between debates—asking students to re-watch notable past debates is one option, but I am guessing the students will be less excited when they know the outcome of the election.

With this in mind I recommend a similar activity using the Intelligence Squared debates that pit ‘experts’ against each other with the goal of swaying the audience’s view. There are currently over 60 debates available for download that cover a wide range of topics include should college football be banned, are men ‘finished’, and should the U.N. admit Palestine as a full member state.

For this activity I asked each student to choose any topic of interest that seems sociological (it would also be very easy to pick out five or six that you think are particularly relevant). I then asked them to listen or watch the full debate, take detailed notes about the types of arguments the participants on each side made and the data they used to support their claims.

The students were also required to include:

What debate did they choose to listen to? Why?
What types of information was the most or least convincing? Why?
Did the participants refer to any research on the topic? What type of research? How much detail did they give?
Did they spot any of the common research errors or logical fallacies we discussed in class?
How they think the topic guided or shaped the arguments used?
Did they think about the issue in the same way that they did before?
Did they agree with the audience’s assessment of who won or lost the debate?

I have the students bring their notes to class. I then divide them into groups of three where they have a chance to discuss their observations before we have a larger class discussion about the lessons we learned. I have found that one of the richest parts of the discussion is thinking through the types of data used during the debates and how the effectiveness varied based by both topic and listener. For instance, some students were suspicious of numbers and swayed by personal experience while others in the class had the exact opposite reaction.

It sounds like a great way to stimulate critical analytical thinking. Since there are so many engaging and relevant topics to choose from, the students would have a stake in the discussions and the outcomes of the debates.

Examining the ideas in debates by breaking them down and engaging in this type of critical thinking is a really valuable activity. With topics discussed in elections and other issues it can be difficult to evaluate the arguments being made--it seems that many people pick up on certain words or phrases (often repeated on the news or internet) in debates without really knowing what the arguments mean.