This is an eyewitness report from the streets of the Republican National Convention in downtown St. Paul. Jennifer Pennington is exemplary of a new generation of brilliant young activists who are changing the direction of this nation. She was an organizer of the highly successful Liberty Parade that took place in Loring Park on August 31. Jennifer was named the College of Arts and Sciences Outstanding Student for 2008. She is a social science honors graduate and was the commencement speaker last spring at Metropolitan State University. 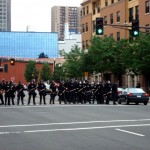 Wow.  I’ve had quite a day.  I had taken the day off to recover from the Liberty Parade and return stuff like the walkie talkies we had rented.  I decided to bring some treats to the ACLU office because I knew they were having a very busy week.  I went to the office with cupcakes and blueberry muffins.  They told me they were holding a press conference at 2:30pm with Amy Goodman from Democracy Now!, and they asked if I’d come back from that.  Would I come back?  Amy is only one of my personal heroes.

I rushed to Burnsville to return the Walkie Talkies, and I got back to the ACLU office.  I met Nicole Salazar and Shareef, the two producers that were arrested and charged with felonies.  Amy had also been arrested and charged with a misdemeanor.  We got them set up in the press conference.  Chuck Samuelson, the Executive Director of the ACLU of MN introduced everyone.  Geneva from the National Lawyers Guild was also there.

One reporter from Fox News was a total asshole to Amy.  He kept questioning her like she did something wrong.  She responded beautifully quoting Thomas Jefferson when he said if he had to choose between government and a free press, he’d choose a free press.  You can listen to what happened to Amy, Nicole, and Shareef at www.democracynow.org

Btw, in yesterday’s March on the RNC, there were 17 people arrested.  The 200+ other arrests happened AFTER the March on the RNC had finished and occurred between 4pm-midnight.  Over 100 people were charged with a felony.  This means a lot of different things, but it also means they can be held for a longer period of time.  If you want to help, you should donate to the ACLU of MN (www.aclu-mn.org).  I’d like to note that the mainstream press makes it sound like these arrests all happened during the March on the RNC.  That was not the case. 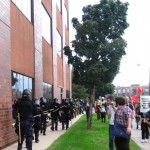 Afterwards, we were all talking in the hallway.  Amy mentioned that they needed to call a cab, and I offered to give them a ride.  There were five of them, and only four fit in my car.  So one guy agreed to wait behind and I’d come back for him.  Btw, they had all tried to come and cover Liberty Parade but couldn’t make it.  I was pretty thrilled that they had heard of us!

So I drove Amy, Nicole, Shareef, and one of the camera men to where their office was in St. Paul.  Downtown St. Paul was weird.  Streets were blockaded everywhere and it was hard to get through.  There were a lot of detours.  I finally got them to their destination which was near Mears Park.  The Poor People’s Economic Human Rights Campaign was holding a rally there with a march scheduled for later.  I was supposed to meet my old ACLU co-workers there to hand out fliers on their rights.  There were riot police hiding behind every corner, and the Democracy Now! crew took note of it.

I dropped off three of them, and then I brought Amy as close to Excel as I could get her.  We talked in the car.  She was very tired. Her arrest the day before had really drained her.  They had taken her sweater, and today was pretty chilly.  The secret service had also ripped the press credentials from her neck.  These were for Monday so she still had press credentials for the rest of the days.  Her sweaters and credentials weren’t returned.

After I dropped her off, I went back and picked up the 5th member.  I brought him into downtown, dropped him off, and then I found a parking spot near Mears Park.  The place was packed.  I handed out fliers and met up with two of my old co-workers from the ACLU to be a legal observer.  One guy was arrested, but we couldn’t see what had happened.  A huge crowd surrounded about 5 police officers on horseback.  I couldn’t see the guy they had arrested.  But then one participant who was standing on a van had a seizure and fell off the van.  That created quite a bit of chaos.  A human chain formed around him.  None of the police (who are EMTs) offered to help.  Someone called an ambulance and some medics came in.

Then the march started.  We walked alongside observing and taking video.  The march started in Mears Park and went by the Union Mission and up to the Capitol.  There were thick lines of riot police at every corner.  It was disturbing to see so many riot police for a legal, permitted march.

Ripple Effect was at the Capitol and scheduled to end at 7pm.  Apparently Rage Against the Machine had turned up unannounced.  I was by their suburbans.  The police told them they couldn’t play because they weren’t scheduled to play and weren’t on the permit?  Suddenly the crowd from Ripple Effect rushed towards the suburbans.  The suburbans started moving through the march which was now merging with people from Ripple Effect.  It doubled in size, making the crowd 5,000 strong easily.

From the Capitol, the march started moving to Excel Energy Center.  People were taking pictures and videos constantly.  Riot police lined the way.  We passed the place where the Daily Show was playing.  We stopped to get a better look of the crowd at a place where there were tons of riot police.  I would have taken more pictures of the riot police (and the National Guard), but I was pretty intimidated by them.

We then continued on to Excel.  At Excel, the march stopped and organizers with bullhorns at the front asked everyone to make a pledge to peacefully storm Excel.  They took off but were blocked by high wire barricades.  There were riot police behind all the barricades.  After 20 minutes, the crowd began to disperse.  We decided to walk back to our cars.  But we couldn’t.

There were riot police lining the streets for 20 blocks, creating a sort of maze we all had to walk through.  It was ridiculous.  It was seriously a police state.  There is no other way to describe it.  When I passed Mickey’s Diner, there were lines of riot police and two cops stood on top of a car with their guns drawn.  At this point, the crowd was still peaceful.  There were reports of a couple people getting pepper sprayed, but we didn’t see it.  From what we witnessed, the crowd was peaceful.

One other thing – throughout the march, I witnessed some protesters identifying some people as undercover cops.  This happened several times.

I’d like to add that in 2003, I marched with 50,000 people in Los Angeles, and the only police presence was the occasional cop on a corner directing us where to go.

On a side note, apparently the Missile Dick Chicks got picked up in Minneapolis last night.  They were trying to perform, and it was by a RNC event.  The police detained them, physically removed them, did not arrest them, but did drop them off outside of Minneapolis and told them not to come back!!!!

I have many pictures and videos, but I don’t know if I’ll load them all up tonight or not.  Stay posted.

Click on my name to see my pics from the Labor Day march, including pics of the Missile Dick Chicks!

I saw them first the night before at the Seward Coop (and let them use my member number).

The first link didn't work. Try this one! Click on my name to get to pics.

Jeanne,
Thank you for the wonderful collage of photos. The Missile Dick Chicks were probably my favorite agit prop group of the entire. My nine and 12-year-old daughters were all eyes when they first saw the missile strap ons!
Monte

I'd like to add that I am not a journalist, a lawyer or a protester. I am not witnessing to give advice to the protesters. I am there to hand out literature on what their rights are if they do get picked up by the police, and I am there to witness events. That is all.

.....sorry monte, but after reading your editorial today i dropped a dime on you.......the thought police are on the way.....lol.