The Chinatown of the American South

When one thinks of American Chinatowns, they usually think of San Francisco and New York, but at one time the third largest Chinatown in the U.S. was in Louisiana. It’s story is an example of how economics and geopolitics shape the growth of ethnic enclaves.

After the American Civil War ended legalized slavery in the U.S., Southern planters faced the challenge of finding labor to work their crops. It was common to employ the same black men and women who had been enslaved, now as sharecroppers or wage laborers, but the planters were interested in other sources of labor as well.

At nola.com, Richard Campanella describes how some planters in Louisiana turned to Chinese laborers. Ultimately, they hired about 1,600 Chinese people, recruited directly from China and also from California.

This would be a doomed experiment. The Chinese workers demanded better working conditions and pay then the Louisiana planters wanted to give. There was a general stalemate and many of the Chinese workers migrated to the city.

By 1871, there was a small, bustling Chinatown just outside of the French quarter and, by the late 1930s, two blocks of Bourbon St. were dominated by Chinese businesses: import shops, laundries, restaurants, narcotics, and cigar stores (some of the migrants had come to the U.S. via Cuba). Campanella quotes the New Orleans Bee:

A year ago we had no Chinese among us, we now see them everywhere… This looks, indeed, like business. 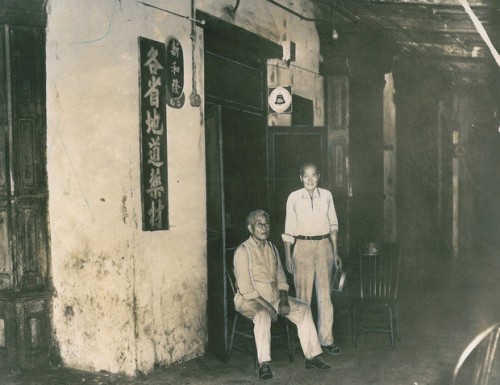 Other residents, it seemed, welcomed the way the Chinese added color and texture to the city. Campanella writes that “New Orleanians of all backgrounds also patronized Chinatown.” Louis Armstrong, who was born in 1901, talked of going “down in China Town [and] hav[ing] a Chinese meal for a change.” Jelly Roll Morton mentioned dropping by to pick up drugs for the sex workers employed in the nearby red light district.

A strip club now inhabits the old Chinese laundry; none of the original Chinatown businesses remain. But it held on a long time, with a few businesses lasting until the 1990s. All that’s left today is a hand-painted sign for the On Leong Merchants Association at 530 1/2 Bourbon St. 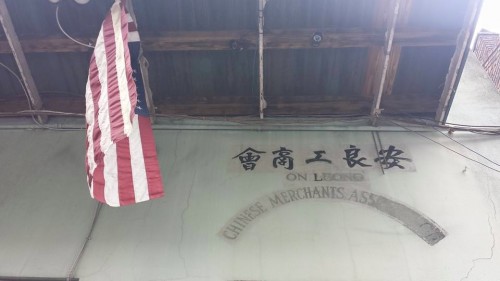 For more, get Richard Campanella’s book, Geographies of New Orleans.

Do the Categories of Democrat and Republican Reflect American Values?

In the U.S., we recognize two main party platforms: Republican and Democrat. Each party packages together specific positions on economic and social issues together into ideologies we call conservative and liberal. The desire for a small government, for example, is lumped with opposition to same sex marriage, while believing in a larger role for government is lumped together with support for abortion rights.

Do all people neatly fit into these two packages? And, if not, what are the consequences for electoral outcomes?

In the American Journal of Sociology, Delia Baldassarri and Amir Goldberg use 20 years of data (1984–2004) from the National Election Studies to show that many Americans have consistent and logical political ideas that don’t align with either major party’s ideological package. These voters, whom the authors call alternatives, are socially liberal and economically conservative (or vice versa).

The images below show correlations between social and economic liberalism or social and economic conservativism. Strong correlations are dark and weak are light. The top image is of the opinions of ideologues — those who adhere pretty closely to the existing liberal and conservative packages — and the bottom images shows the opinions of alternatives. 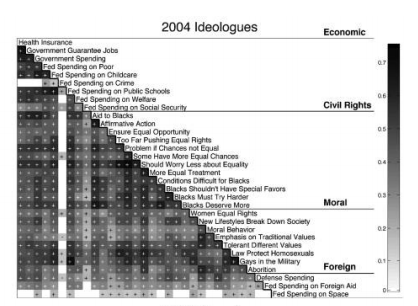 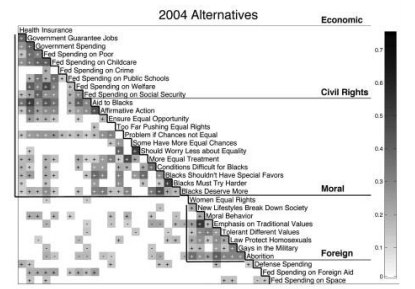 In this data, being an alternatives is not just about being unfocused or uncommitted. Baldassarri and Goldberg show that their positions are logical, reasoned, consistent, and remain steady over time.  The study makes it clear that the ties between economic and social issues made by the left and the right, which many people see as normal or natural, represent just two among the many belief systems that Americans actually hold.

When it comes to the ballot box, though, alternatives usually vote Republican. The authors write that the most conservative among the alternatives’ views tend to hold sway when it comes to picking a party. It appears that the salience of moral issues is not the primary reason for Republicans’ electoral success. Instead, for as-yet unknown reasons, alternative voters follow their more conservative leanings at the ballot, whether economic or social.

Jack Delehanty is a graduate student in sociology at the University of Minnesota. His work is about how social movement organizations can reframe dominant social narratives about inequality. In his dissertation, he explores how white Protestant-influenced discourses of poverty, family, and individual choice are being critically reshaped in the public sphere today.

1,007,000 Americans working full-time earn the federal minimum wage of $7.25 per hour. All of that pay, to all of those people, for all of 2014 adds up to $14 billion dollars. And that is less than half of what employees on Wall Street earned in bonuses alone. 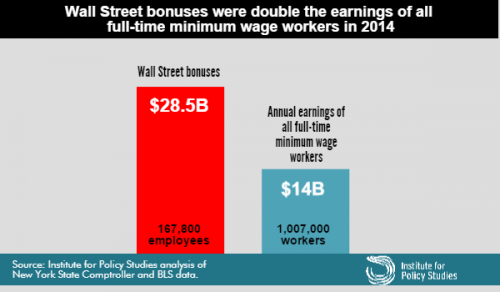 Every year the National Priorities Project helps Americans understand how the money they paid in federal taxes was spent. Here’s the data for 2014: 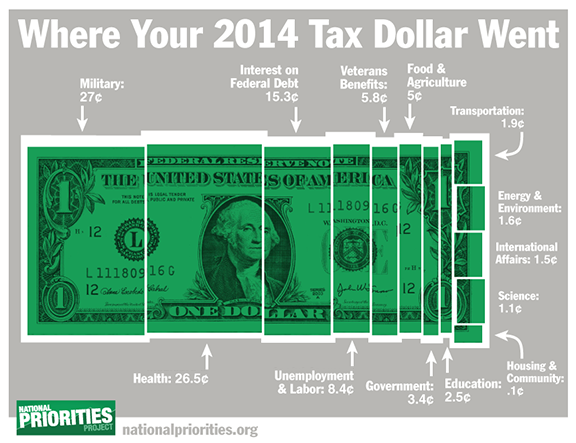 Since the 1940s, individual Americans have paid 40-50% of the federal government’s bills through taxes on income and investment. Another chunk (about 1/3rd today) is paid in the form of payroll taxes for things like social security and medicare. This year, corporate taxes made up only about 11% of the federal government’s revenue; this is way down from a historic high of almost 40% in 1943. 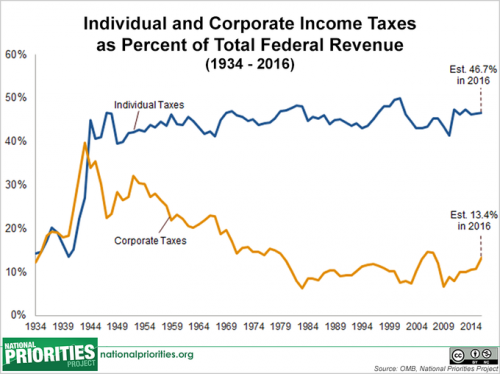 Visit the National Priorities Project here and find out where state tax dollars went, how each state benefits from federal tax dollars, and who gets the biggest tax breaks. Or fiddle around with how you would organize American priorities.

From Our Archives: Taxes

The Winners and the Losers

Within the last decade, the grain quinoa has emerged as an alleged “super food” in western dietary practices. Health food stores and upscale grocery chains have aisles dedicated to varieties of quinoa, packaged under many different brand labels, touting it to be a nutritional goldmine. A simple Google search of the word returns pages of results with buzzwords like “healthiest,” “organic,” and “wholesome.” Vegan and health-enthusiast subcultures swear by this expensive food product, and the Food and Agricultural Organization (FAO) even declared the year 2013 International Year of the Quinoa, owing to the grain’s popularity.

The journey of the grain — as it makes it to the gourmet kitchen at upscale restaurants in countries like the United States — however, is often overlooked in mainstream discourse. It often begins in the Yellow Andes region of Bolivia, where the farmers that grow this crop have depended on it as almost a sole nutritional source for decades, if not centuries. The boom in western markets, with exceedingly high demands for this crop has caused it to transition from a traditional food crop to a major cash crop.

While critical global organizations like the FAO have been portraying this as positive, they tend to discount the challenge of participating in a demanding global market. Within-country inequality, skewed export/import dynamics, and capitalist trade practices that remain in the favor of the powerful player in these dynamics – the core consumer – cause new and difficult problems for Bolivian farmers, like not being able to afford to buy the food they have traditionally depended upon.

Meanwhile, growing such large amounts of quinoa has been degrading the Andean soil: even the FAO outlines concerns for biodiversity, while otherwise touting the phenomenon.

While efforts have been put in place by farmer unions, cooperatives and development initiatives to mitigate some negative effects on the primary producers of quinoa, they have not been enough to protect the food security of these Andean farmers. Increased consumer consciousness is therefore essential in ensuring that these farmers don’t continue to suffer because of Western dietary fads.

Aarushi Bhandari is a doctoral student at Stony Brook University interested in globalization and the impact of neoliberal policies on the developing world. She wants to study global food security within a global neoliberal framework and the world systems perspective.

In his book, Authentic New Orleans, sociologist Kevin Fox Gotham explains that originally, and as late as the late 1800s, the term meant “indigenous to Louisiana.”  It was a geographic label and no more.

But, during the early 1900s, the city of New Orleans racialized the term. White city elites, in search of white travel dollars, needed to convince tourists that New Orleans was a safe and proper destination. In other words, white. Creole, then, was re-cast as a white identity and mixed-race and black people were excluded from inclusion in the category.

Today most people think of creole people as mixed race, but that is actually a rather recent development. The push to re-define the term to be more inclusive of non-whites began in the 1960s, but didn’t really take hold until the 1990s.  Today, still racialized, the term now capitalizes on the romantic notions of multiculturalism that pervade New Orleans tourism advertising, like in this poster from 2011: 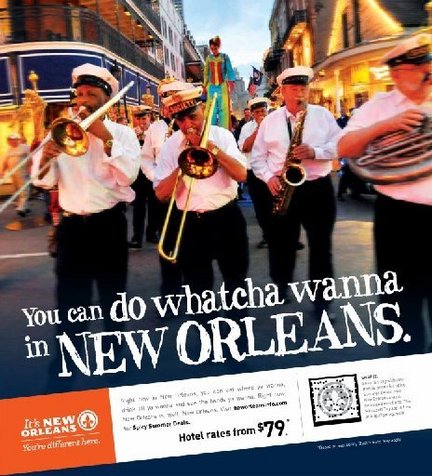 Like all other racial and ethnic designations, creole is an empty signifier, ready to be filled up with whatever ideas are useful at the time. In fact, the term continues to be contested. For example, this website claims that it carries cultural and not racial meaning:

This book seems to define creole as free people of color (and their descendants) in Louisiana: 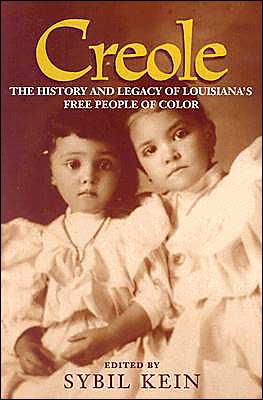 Whereas this food website identifies creole as a mix of French, Spanish, African, Native American, Chinese, Russian, German, and Italian:

In short, “creole” has gone through three different iterations in its short history in the U.S., illustrating both the social construction of race and the way those constructions respond to political and economic expediency.

Chart of the Week: The Breadth of European Colonization

This is a map of the countries Europe colonized, controlled, or influenced between 1500 and 1960. The purple is Europe. The orange countries are ones never under European rule. Almost the entire rest of the map — all the green, blue, and yellow — were dominated by Europe to some extent. “Influenced” is pretty much a euphemism and often not all that different than outright domination. 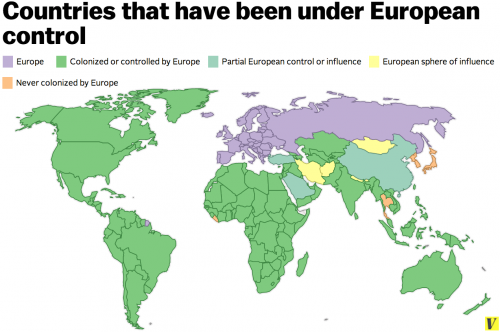 There are only four countries that escaped European colonialism completely. Japan and Korea successfully staved off European domination, in part due to their strength and diplomacy, their isolationist policies, and perhaps their distance. Thailand was spared when the British and French Empires decided to let it remained independent as a buffer between British-controlled Burma and French Indochina…

Then there is Liberia, which European powers spared because the United States backed the Liberian state, which was established in the early 1800s by freed American slaves who had decided to move to Africa.

More details and discussion at here.