Reversing a 100 Year Trend, Men are Staying in the Workforce Longer

In response to company pensions, employer age limits, shifts in the economy, and the initiation of social security, men have increasingly enjoyed a little 20th century social invention called “retirement.” In 1860, more than 80% of men age 70 to 74 worked, but by around 2000, that number had dropped to below 20%.

As of the 2000s, this more-than-100-year-trend of increasing numbers of men enjoying their “golden years” has reversed. This is your image of the week: 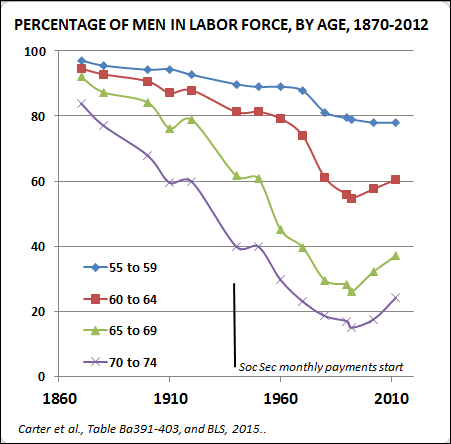 Over at Made in America, from where I borrowed this graph, sociologist Claude Fisher explains the reversal of the trend (citations at the link):

The private sources of retirement support, such as company pensions and investments, have weakened; [and] public sources of aid are under strain from a lower birth rate, a stagnating economy, and political retrenchment. And the years that such support must cover are growing. In 1990 a 65-year-old man could expect to live about 15 more years; in 2010, 18 more years. That’s an extra 20 percent of financing needed.

Among other things, the economic health of older Americans is an important sign of the overall health of the economy. It will be interesting to keep an eye on this statistic in the near future.

Fisher's points are good ones but before we judge the economic health of the country by the retirement age of older Americans consider:

1. Many olders are healthier today than those of the same ages were years ago: they CAN work.
2. Many enjoy work and contributing to something larger than themselves: they WANT to work.
3. Many have not saved enough money to retire for decades: they NEED to work.

Yes, Americans are becoming increasingly reliant on themselves for support as they age. This is neither good nor bad for society or the economy. It just is.