I borrowed these two ads from Jim Crow History.  According to the site, Bull Durham tobacco was among the most recognizable trademarks in the world circa 1900.  These two ads include caricatures of “foolish looking or silly acting blacks to draw attention to its product”: 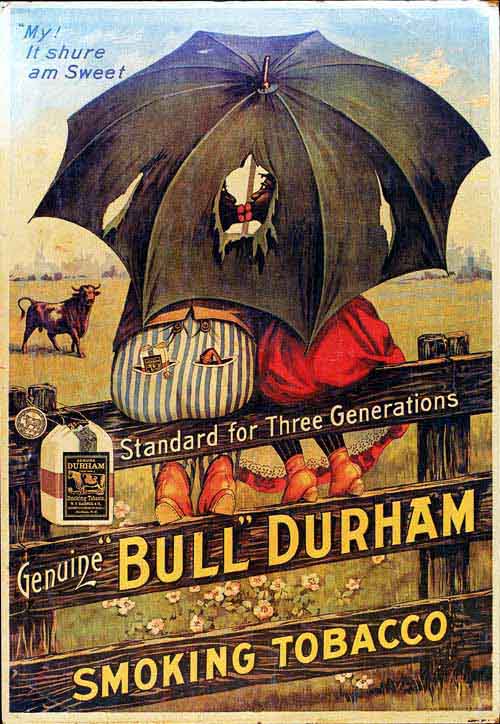 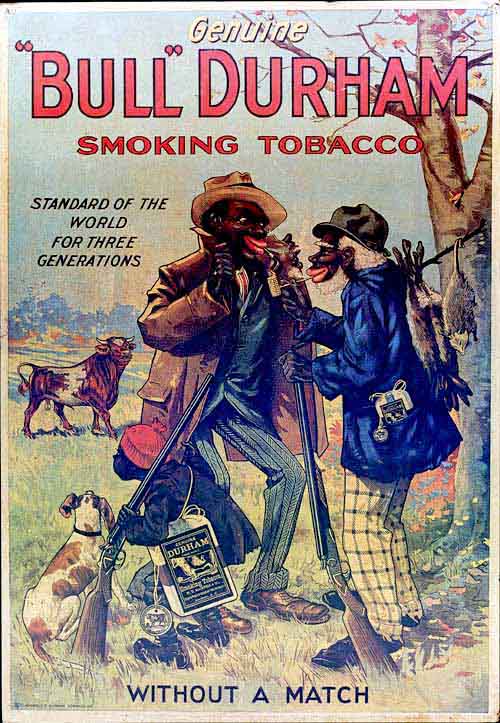 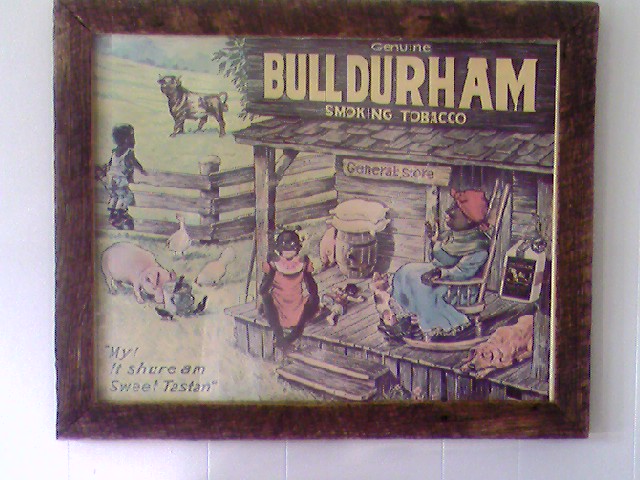 And for examples of modern reproductions of these stereotypes (literally), see these: one, two, three, four, and five.

Interested in the decision to remove the iconic bull’s scrotum in advertisements? Go here.

The silliness of blacks hunting reminded me of some of the images from this post:
http://thesocietypages.org/socimages/2008/01/06/equal-opportunity-gun-ownership/

I'm confused. Who are these adds trying to cell cigarettes to?

I'm with Shale. I... don't get it.
To my modern eye, these ads are fascinatingly inexplicable.
I'm trying to think of them within their c.1900 context, but still.
I absolutely do not understand the first one, in particular. The second one doesn't make much more sense, except that at least it depicts "three generations."

I suppose we must assume they were primarily targeting white people, but I'm so used to the target consumer being portrayed in advertising. It's sort of the main tenet of modern advertising: the consumer needs to see himself using the product. So it's quite bizarre to see these "coon" caricatures. [The Coon Stereotype c.1900: "A lazy, easily frightened, chronically idle, inarticulate, buffoon... not happy with his status... coons were increasingly identified with young, urban Blacks who disrespected Whites. Stated differently, the coon was a Sambo gone bad." (http://www.ferris.edu/news/jimcrow/coon/)] I guess these were seen as "amusing"?

And then you consider that if Bull Durham was the Marlboro of its day, then black people almost certainly used the product, and this is what they had to see. (Among other things.) Nice. Puttin' them (and keepin' them) in their place, at every opportunity.

How did the movie get that name?

During the early 20th century, Durham was a prominent African-American town, with one of the largest communities of African-American owned businesses and, consequentially affluent African-Americans.
Durham is the home to the first state African-American college, North Caolina Central University, founded in 1910.
Durham was also the site of significant Civil Rights campaigns. This includes the famous Greensboro, NC sit-in which brought Martin Luther King Jr down to Durham to give a speech.

The city and the African American community began to decline, at least financially, during the mid to late 1900s with the close of textile mills and competition from other tobacco companies.

Interesting to imagine how the community, with all its history, perceived these ads at the time.

I have the 3 rd. print of the Bull Durham poster. It depict a heavy set mammie on the front porch of a General Store along with a young black girl on the porch eating a slice of watermelon, in the ground is the well know bull which is fenced in, with a young black child standing on the fence looking at the bull. Needles to say the the format of this poster is the same as the images posted. I will try to display these images a little laster. The 3 posters I have were purchased some 25 to 30 years ago from a small antique shop just off the town square in Columbia, Tennessee.

I have the an original poster as the one posted Dec 09(Pete) I am looking to sell it, its been in a box for 15 years that i know of..I just cannot see it setting there any longer

How much would these posters posters be worth today?

I have the "Three Generations" and "General Store" posters in relatively good condition and would like to know the value.

how old are these

I have recently purchased a tin sign of the Bull Durham "Without a Match" sign and am wondering what the value would be. It is a bit rusty on one corner but otherwise in good shape.

Maybe we should check with "Pawn Stars" in Las Vegas!

HELLO,i have several of these same original Bull DURHAM POSTERS OBTAINED WHILE, AN AUCTIONEER IN THE 50'S i ALSO HAVE MANACLES OF CIVIL WAR AND SLAVERY DAYS. ANY INTEREST E-MAIL ME
THANKS JERRY

thats not racist. just the typical portrayal of the time.

I have the pitcure with 2 blacks kissing under the umbrella, which I have had
for over a century. I would like to know how much it is worth.

If any body would like to buy the pitcure leave a comment. It is the original! www.proof7272@yahoo.com Thank you..

Some people would do anything to scream racisisim

[…] and displays dedicated to cigarette advertisements.  (Of course, none of the ads included the blackface Bull Durham ads…). There was also a plaque about how the fam would be getting out the tobacky game due to rising […]

I think the part that blacks today don't like about images of the past (Outside of the truthful parts that hit too close to home) are the ridiculous characatures.... I have never seen a black person in my entire life that looks like most of the characatures of that day. Those two hunters look like they're wearing bright red lipstick. The Mammy and kid on the porch look like they're wearing white lipstick. Black people's lips are brown like their skin... Sure there are plenty of examples of white characatures drawn humorously but not EVERY time.... Like the classic buck tooth "ching-chong" face for asian characatures....

I have these ads and a few more in possession
Ig: alphamale856 take a look

Anti-black ephemera seems particularly prone to forgery. Almost all black-related postcards, posters, and advertising signs have been counterfeited. Cream of Wheat advertisements, Coon Chicken Inn hand fans, Bull Durham posters, and Aunt Jemima ephemera have all been reproduced in great numbers. The counterfeit items are often put into smoke houses to color the paper, thereby giving the appearance of being aged. There are numerous counterfeit "Whites Only" and "Colored Served In Rear" signs offered for sale by Internet auction houses. These paper signs show brown edges, but the centers of the signs are not discolored.