Carl G. sent in this cartoon, found at Abraham Lincoln’s Classroom, that ran during the 1864 Presidential election campaign and played on voters’ fears of racial mixing: 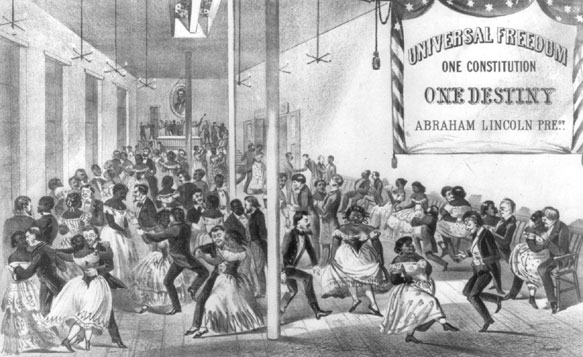 The following text accompanied the cartoon:

The Miscegenation Ball at the Headquarters of the Lincoln Central Campaign Club, Corner of Broadway and Twenty Third Street New York Sept. 22d. 1864 being a perfect fac simile of the room &c. &c. (From the New York World Sept. 23d. 1864). No sooner were the formal proceedings and speeches hurried through with, than the room was cleared for a “negro ball,” which then and there took place! Some members of the “Central Lincoln Club” left the room before the mystical and circling rites of languishing glance and mazy dance commenced. But that Many remained is also true. This fact We Certify, “that on the floor during the progress of the ball were many of the accredited leaders of the Black Republican party, thus testifying their faith by works in the hall and headquarters of their political gathering. There were Republican Office-Holders, and prominent men of various degrees, and at least one Presidential Elector On The Republican Ticket.

I’m pretty sure that didn’t happen, so it’s good to see that outright lying in political campaigns isn’t new.

And of course, while they weren’t generally having “Negro balls,” many White men at the time were sexually involved with Black women, often (though not always) women they owned as slaves and who had little ability to say no to, or do anything about, their sexual advances. So the real outrage here would be not so much that White men were having (often coercive) sex with Black women, but that Black women and White men would be couples, socializing openly and in a situation of “universal freedom” that would put Black women on a more equal footing relative to their White partners (or, anyway, closer to the level of equality White women had with White men, which was more than Black women had but clearly left a lot to be desired).

On another note, Carl points out that even though this is a cartoon meant to incite fears of racial mixing among Whites, the African American women are not drawn in a way that makes them look grotesque or monstrous like so many cartoons at the time did.

I assume that cartoon depicts white men dancing with black women (rather than the "more frightening" combination of black men dancing with white women) because the ball is supposed to take place in Lincoln Headquarters. The ad would be less believable to 19th-century audiences if it depicted a bunch of politically-engaged women employed in the halls of power.

I'd add that this quite attractive black women are obese and ugly by today's standards.

Obese, sure, but I'm not certain how Nia can discern their apparent ugliness. The faces are way too small for me to see anything other than color and a general outline.

Carl, you bring up a good point, but I don't think the issue would be having white women in power so much as having no white men (and all black men) in power. Lincoln was obviously a white man, and so was every other elected official at the time.

Jennifer, many people consider obesity to automatically render a person ugly. Or at least a woman.

Oh god, the term "mystical Negro" has been around for quite awhile, hasn't it?

The photo is too small and I'm not sufficiently familiar with 19th Century caricature style to make a judgment on how the women are depicted. They aren't "grotesque," but some of the poses are pretty sexual.

This situation is more complex. Abolitionists at the time used the 'threat' of miscegenation on slaving plantations (between male slaver and female slave) as a key argument against the practice of slavery.

The situation is more complex. Abolitionists commonly used the 'threat' of miscegenation on slaving plantations (between male slaver and female slave) as a key argument against the practice of slavery.

[…] did not do.  They alleged that at a Lincoln campaign headquarters in New York there was a “Miscegenation Ball” where white men were openly dancing and flirting with black […]