My friend Larry, of The Daily Mirror, found some awesome old ads for Bull Durham tobacco. Here’s the original, with both a map of North America on his side and a scrotum that is partially obscured by still clearly present: 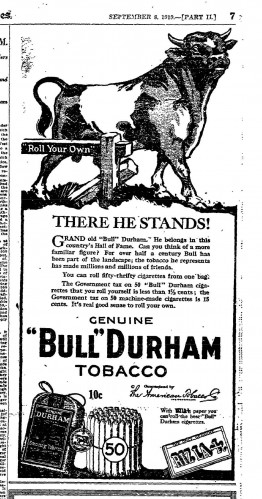 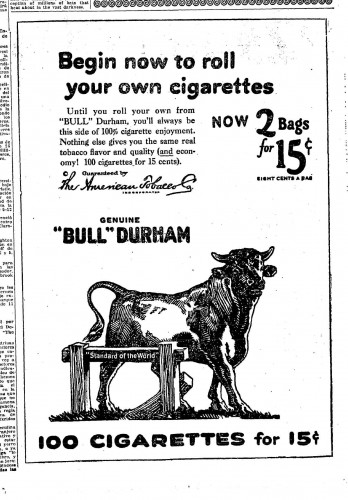 No more shocking reproductive organs! Also, he doesn’t have a map of North America on his side any more. As Larry says, clearly a subversive plot to try to symbolically emasculate the U.S., probably so the socialists could take over.

I do wonder what was going on during that particular time period that would make marketers at Bull Durham believe that a less anatomically correct version was necessary. Any thoughts (other than it being a subversive plot)?

More recently we saw men’s nipples airbrushed out of a Wrestle Mania billboard. On the other hand, testicles were added to a statue of Civil War General John H. Morgan sitting in his favorite horse, Bess…who, as you might have surmised, wasn’t a male horse and did not have testicles. But, you know, testicles made her look more appropriate for a military figure to ride.

Compare with the iconic silhouette of the Spanish "Osborne Bull," which used to advertise a brand of brandy made in Jerez.

Would you mind telling me where your friend found this image? I am working on Bull Durham in another context and would be very interested to know. Cheers!

I just saw an full page Bull Durham ad from a Sunday supplement in the Omaha Bee (forerunner to the World Herald) from 1934. It had the unaltered bull from the first ad pictured.