Over at Ferris State University’s Jim Crow Museum of Racist Memorabilia, I found a page about depictions of the Jezebel stereotype, which included a number of fascinating/horrifying images. The Jezebel was, of course, a sexually promiscuous African or African American woman, wanton and lustful. Here’s a topless grass-skirted Jezebel ashtray: 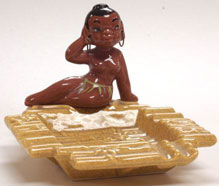 According to the website, this license plate with a pregnant Black woman came out after Lyndon B. Johnson won the 1964 Presidential election (he used the phrase “All the way with LBJ” in his campaign):

This is a set of swizzle sticks shaped like African women: 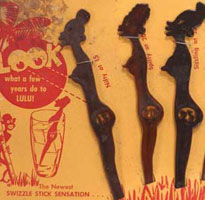 I found an image of a full set for sale at Go Antiques: 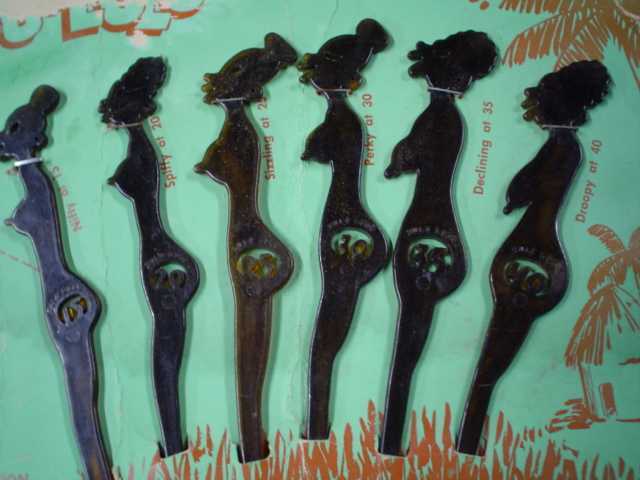 Note that the swizzle sticks supposedly show the woman at different ages; the age is in that cutout area in their butt. The text next to the figures:

If you look carefully you’ll see that their boobs and butts sag as they age. I wonder if this same aging scheme applies to White women? At 33, apparently I’m just about to leave the last decent stage of my life and enter my declining years. Of course, in modern America we have cosmetic surgery, so I guess I could stave off droopiness for at least a few years.

Anyway, they’re good examples of the way Black women’s bodies have often been sexualized, and how people were comfortable showing them naked even when the idea of women’s sexuality in general wasn’t considered appropriate for polite company. The Jezebel stereotype reemerged in a slightly different form  in the 1980s with the idea of the “welfare queen,” a poor black woman (on public assistance, of course) who has lots of kids with various men just to get more welfare payments, an image President Reagan used to further reduce public support for the welfare state.

My first impression, upon seeing the last set of swizzle sticks (other than shock) was that those cavities in their abdomens were supposed to be transparent wombs with fetuses inside. Glad, at least, that I was wrong on that count.

Disturbing, and disturbingly close to a certain line of "cutesy" birthday greeting cards I remember from working at Hallmark. The racial context was removed, but attacking womens' bodies as an overarching concept is still alright by Hallmark's standards. :( Are our baby steps getting us anywhere?

[...] so we have a history of the hypersexualization and exploitation of black women by white people. We fetishize their butts as symbolic of their (supposed) hypersexuality. And then this ad comes [...]

I love the Jim Crow Museum of Racist Memorabilia - reading the many essays Dr. Pilgrim has penned has been illuminating and influential; I highly recommend the site, essays, and letters!

I find black memorabilia fascinating... you have to view it with the mind set that it is vintage, and no longer relevant.

Except that it IS relevant - - there is plenty of racism still active today.

Cultural Patterns: One Example At A Time » Sociological Images — November 25, 2009

[...] in U.S. culture (that may or may not convince you that this is a pattern) see here, here, here, and here. 26 Comments Tags: bodies, gender, intersectionality, race/ethnicity: [...]

I have found out where these came from. My mother passed away and while sorting through many things both from she and my grandparents I found a plactic bag with a note in my mothers handwriting saying "I'm not sure where this came from, my father would have never purchased anything like this" which is true. I was almost afraid to open it. It was in the original box with a stand for these items, which said: Timi's Studio-Tortoise Shell Originals- Arz.Merino No.20-Ciudad Trujillo, Dominican Republic- Genuine Tortoise Shell. I found that Santo Domingo was called "Ciudad Trujillo", from 1930 to 1961, after the Dominican Republic's dictator, Rafael Trujillo, named the capital after himself. Following his assassination, the city resumed its original designation. I hope this helps shed some light. Peace

[…] there was a problem with these links, but they’re fixed now.] Also check out our posts on vintage Jezebel-themed products, Black women portrayed as animals, Black women tending White women, and images of Condoleeza […]