The centaur scene in Disney’s highly acclaimed cartoon Fantasia (1940) clearly communicates gendered expectations for men and women, but there are also racial politics. First, note that, in the film as released, all of the centaurs end up in color-matched heterosexual pairs.  Second, most people do not know that the original centaur scene included a pickaninny slave to the centaur females and exotic, brown-skinned zebra-girl servants.

Here’s a link to the whole thing (embedding disabled, but it works as of Feb. ’11).

A clear still in black and white: 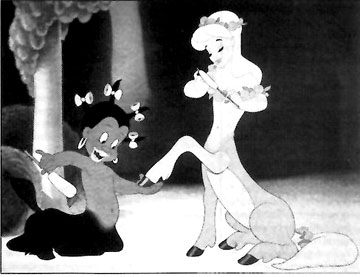 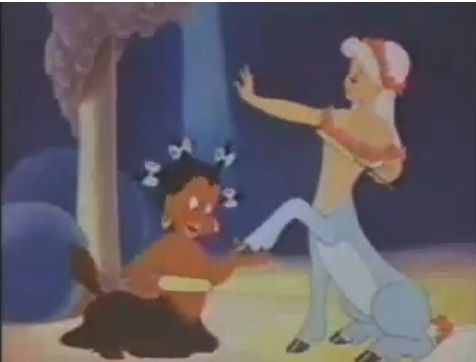 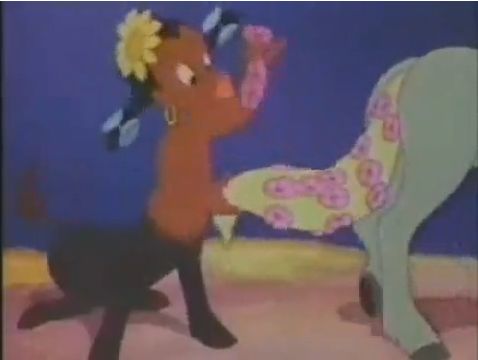 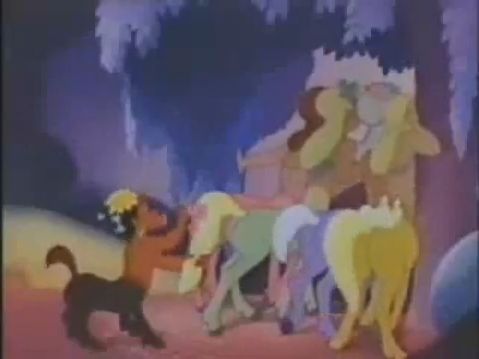 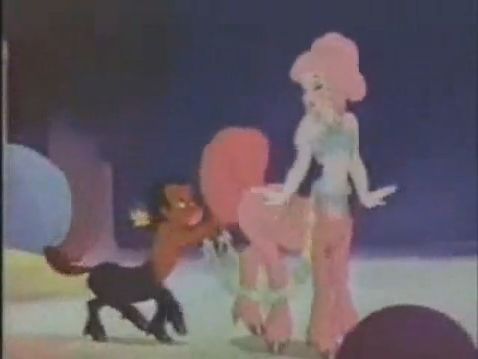 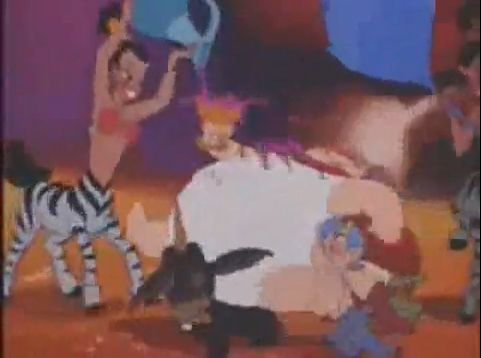 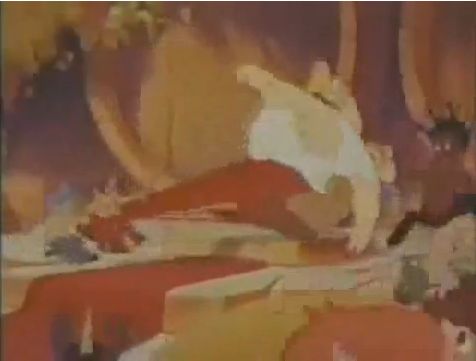 Don’t miss our post showing bugs bunny in blackface, too.

Sociological Images » “Plane Dumb”: Another Vintage Cartoon With Blackface — May 2, 2009

[...] long history of negative or stereotypical portrayals of non-White characters (i.e., “Fantasia“) meant many were concerned about what the final product might be. Leontine G. sent us the [...]

None of the videos are working for me. They all come up as "removed".

Thanks Zippa. I fixed it as best I could. The link I added at the top will show you the entire sequence.

I understand that many find these images and videos racist, and maybe they are when looked at in this time, but one must remember that in that time political correctness was unheard of, and what we consider racist today wasn't then.

As a woman of mixed race I can find a numerous examples of racist interpretations in past works of art, fiction, and literature, but all of it should be taken into context as to where the world was during the time that it was made.

Maybe it's because intellectually I understand that people are not necessarily being mean when they say things that are not considered politically correct. One of my very best friends was raised by her grandmother who is a tried and true, born in the deep, south southern belle. Because of her upbringing she constantly called me that lovely colored girl. Michelle was mortified and constantly apologizing to me about it, but I was never bothered. Not because I am too dumb to understand the insult, but because there was no insult intended. She was just raised and brought up in a different time.

I was more insulted when a colleague was surprised to find that I spoke three languages, and actually said that she was unaware that someone who had dropped out of college had the intelligence to learn to speak other languages. Or the day while surfing when someone said to me that they didn't know black people could swim.

I do not get offended when I watch Gone With the Wind, but I imagine if it were to be analyzed by today's standards Scarlet would be the spoiled psycho boiling Ashley's bunny, Melanie would be the the dumb, trusting girl who is to stupid to know that she is being picked on by the mean girl, and Rhett would be a misogynist, rapist, bastard. The characters of Mamie and Prissy would be relegated to dumb negro slave stereotypes. On the surface you could look at it like that, but if you really take a look at the film and the book all of these people are quite a bit more than what they seem. I can't even imagine what a remake of Gone with the Wind would look like.

The remaking of cartoons or removal of certain scenes, or the banning of certain books to support today's standards is more insulting to me than the original works themselves. It's like saying there was never a racial divide in United States and the struggles that minorities have been through were never there. It would be like removing all artistic and literary references of the Holocaust.

As a child I loved Song of the South, but due to today's hyper politically correctness Disney is refusing to re-release it in the United States. I find it interesting that the rest of the world is able to see this film, but the people of the US are too, what? Backwards? to understand the deeper meaning. Or maybe it's because Uncle Remus comes off to some people as the silly singing black slave, and they are insulted by it. I personally always found him to be the self-educated philosopher, and were my grandparents alive I'm sure they wouldn't find him insulting either. Maybe it's the people who find it insulting that have the problem. That THEY think of black people as inferior. That deep down THEY are racist and all of this bluster is to assuage THEIR guilt.

The thing that I find the most amusing is that I have never heard little people complaining about their portrayals in these films, nor of people getting on a soapbox for them. I think that little people would have a much greater case about the slavery in Snow White than people of color would have about the slavery in Fantasia. They go and slave in a mine all day, then they come home to find a woman has, in essence home invaded them, and is now forcing them to live by her rules of cleanliness and nutrition. Saying that since they are of diminutive stature that they are no smarter than children and have to be taken care of. Personally, their house didn't look that much dirtier than college frat house. I won't even go into The Wizard of Oz and it's portrayal of little people as singing, dancing cute little Munchkins. Or it's use of evil flying monkey's (which back them black people were still called).

Throughout history there have been books written, films made, or art created that by today's standards are no longer politically correct, or if dissected could be looked at in a an entirely different way.
The women depicted in the paintings of Peter Paul Rubens would be considered fat, unattractive, and very unhealthy by today's standards because being underweight is the new beautiful. In Rubens time only servants, and the poor were underweight, so the supermodels of today would have been considered ugly, unintelligent, and lower class.

It's all a matter of time and perception.

In my humble opinion, the vast majority of this "politically correct" society come across as overly sensitive.

Holding individuals from the first half of the 20th century to the standards of today (in any form...literary, medical, scientific...)just doesn't make since. The leaps and bounds that have been made in just the last 20 years or so in computer technology alone should demonstrate that. My first computer, purchased in 1993, would be considered archaic by todays standards. And before anyone jumps up and starts screaming and waving their arms about, I understand that statement is a complete simplification of a point of view. But my primise still stands.

"One of my very best friends was raised by her grandmother who is a tried and true, born in the deep, south southern belle. Because of her upbringing she constantly called me that lovely colored girl. Michelle was mortified and constantly apologizing to me about it, but I was never bothered. Not because I am too dumb to understand the insult, but because there was no insult intended. She was just raised and brought up in a different time."

Context is no excuse. Of course the Disney cartoon can't change itself but your friend's grandmother can. She's old enough to know that times have changed. There's no excuse for her to keep using that language. It's like saying her grandmother could call you 'slave' because she comes from a different era. At what point do you say they're young enough to know better?

Seems to me that political correctness is actually just considering the context and baseline assumptions that inform our attitudes.

What is problematic, IMHO, is that most of us have learned that overt racism/sexism/heterosexim/[insert other unhealthy attitudes here] is wrong, but don't want to admit that we might have unhealthy attitudes buried underneath (sometimes not too deeply at all), so we:

* Make huge assumptions about what the Other will necessarily find offensive without asking because a) we're not comfy enough with them to just ask, and b) it doesn't occur to us to check because our assumption is that we're right - our attitudes must be the default setting.

The big thing is to learn to actually set aside our stuff while we listen to others and allow ourselves to admit the possibility that we might be mistaken in some of our thinking - not so that we can live driven by guilt, but so that we can all be that but free-er.

Has anyone considered that calling another person's attitude about moral issues "wrong" is being ridiculous? Our social mores are legitimate whether
accepted by any other human. I apologize not at all for my attitide about
the non-acceptability of homosexuality activity.

Has anyone noticed that evolutionists portray those creatures supposedly
predating US as of a greatly darker skin color than we whites? Blacks as well as whites allow this to be perpetuated in our children's textbooks and pay for
this politically incorrect inference with tax money.

Has anyone noticed that in India, many wives are rejected because they have been described as of lighter skin than they are? Or that in our TV ads no black man has a wife or girl friend as dark as himself.
I don't intend to justify intentional words or actions with the intent to degrade others. It'just quite complex. I appreciate the discussions.

[...] it featured a black centaur behaving like a stereotypical ‘40s black house aide? Oh wait, that already happened. It seems to me that a lot of people these days aren’t even trying to be useful, but are [...]

You are a racist. You've got racism up your ignorant ass. You'll find it everywhere because you want to find it.

Back when cartoons were worth while. Now I want to watch Fantasia.

These look like fakes, honestly. Perhaps the video (now taken down) is a well-done fake, but it looks fake. This "slave centaur" doesn't match the artist's style, so that's a big eyebrow raiser there, and beyond this website there's no mention of this centaur anywhere; not in the narrative, not in the concept art, nothing.

Undoubtedly Disney had some pretty racist stuff in the past, but on this one I call BS.

[…] cultural stewards. Disney has carefully managed its own racist past, recutting Fantasia to remove racist caricature and, for decades, keeping Song of the South out of circulation as best they could. Game companies […]

[…] cultural stewards. Disney has carefully managed its own racist past, recutting Fantasia to remove racist caricature and, for decades, keeping Song of the South out of circulation as best they could. Game companies […]

Just watched on Disney + the images of the half black half zebra still in there tending to the fat white dude..smh

Lese... You mean the centaur is still tending to the God? smdh...

wtf is wrong with you people?

[…] according to some people, creates “gendered expectations” for men and […]

I was born in 1950 and LOVED Fantasia. I must have seen it ten or a dozen times as a kid (in theaters, of course). The black characters were most certainly in the scenes from Beethoven's Pastoral -- I noticed their absence when I saw it years later. Is it fair to hold the creators to today's standards? Maybe not. But there sure is no reason to expose today's children to those images.

Lets just burn the whole thing and pretend it's not still happening.. then lets go smash all the Greek art and all the civil war statues.. smash everything and rewrite history. Anyone ever notice there are no white people smiling in toothpaste commercials? of COURSE there is a reason to expose people to images that are wrong you stupid fool!!