The Buddha of Oakland

Around the corner from my house in Oakland is a shrine built around a Buddha statue. A couple of months ago I discovered an article about the “Buddha of Oakland,” which also includes a video.  Last week I was informed about a podcast about the Buddha of Oakland. The podcast is an interview with the person who originally placed the Buddha on the corner to deter illegal dumping. The article/video provides additional information about the family who built and maintain the shrine. There is a new faculty member in the SJSU Department of Urban and Regional Planning who studies “do-it-yourself urban design” community interventions; I’ll have to tell him about this!

Constitution Day  commemorates the formation and signing of the U.S. Constitution. Many universities celebrate the day as a condition of receiving federal funding. The official day is September 17, but at SJSU we held an event on Thursday, September 15 given that a) September 17 is a Saturday, when very few students are on campus; and b) Fridays usually have fewer students on campus, so a Thursday event would draw more folks. We celebrated by reading the Constitution aloud, from 10:00 AM to 2:00 PM! Readers spook in 15 minutes shifts, including SJSU President Mary Papazian; my shift followed hers. It was a fun event! 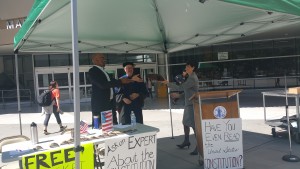 “How to Get Americans to Talk About Race” is a recent article in The Atlantic that details a powerful community-based process for facilitating productive conversations about race. Reverend Sylvester Turner is the director of reconciliation programs for Hope in the Cities. He notes that there are a number of reasons why we don’t like to discuss race:

One is that most people don’t know how to talk about it. The other thing is, people are ignorant to the systemic nature of it. Another reason is the privilege that has come as a byproduct of it, that ‘I don’t have to talk about it.’ A major reason is guilt and shame that people carry, which is what I call the byproduct or legacy of it. And some people just think it’s not worth talking about. They just want to move on. When you start peeling back the layers of it, there are often people in power who don’t want to give up their power, or they don’t want the threat of losing their power. So there’s a number of different reasons why people don’t want to talk about it, but guilt and shame and ignorance to me have been the reasons that always rise to the top when you bring people together.

If we want to improve as a society we need to have these difficult conversations.