One of my former colleagues in the University of Wisconsin system has posted an interesting article to the Association of American Colleges & Universities’ (AAC&U) LEAP Challenge Blog. Check out his “Learning Through Friendship” reflection. LEAP, by the way, stands for Liberal Education and America’s Promise, an AAC&U national public advocacy and campus action initiative. I should think more about how I can use LEAP in strategic planning for the college.

Last summer I posted an article about a short presentation I developed for first year students about the “keys to academic success.” This week I used the guide for the first time at SJSU, but revised it. Here is the new structure of advice to students:

I also encourage students to read the book College Rules! How to Study, Survive, and Succeed in College [Sherrie Nist-Olejnik and Jodi Patrick Holschuh, authors. Ten Speed Press, 3rd edition.] I begin to wrap up the presentation by reading the last paragraph in College Rules!:

“While in college, think about gaining the following skills – thinking critically, writing persuasively, problem solving effectively, and speaking convincingly. If you can develop these competencies over the next four (or five) years, you are ready to learn for a lifetime. These are also likely the skills that will help you land (and keep) your dream job.”

I then conclude by telling the students: “college is serious business, but enjoy it too. Have fun!”

The Dangers of Technophilia

In a blog post from my first year as a new dean I referenced technorealism:

“In this heady age of rapid technological change, we all struggle to maintain our bearings. The developments that unfold each day in communications and computing can be thrilling and disorienting. One understandable reaction is to wonder: Are these changes good or bad? Should we welcome or fear them? The answer is both.”

My technorealism post popped into mind today while reading an online article by the chair of the Political Science department here at SJSU, “Our love of technology risks becoming a quiet conspiracy against ourselves.” Lawrence Quill wonders “why so many people outside the charmed circle of technology innovators in Silicon Valley seem willing to embrace its vision – especially when it undermines something as fundamental as the liberal democratic right to personal privacy,” and muses about how elements of the dystopian vision in Dave Eggers’ book The Circle are viewed as inevitable by some current politicians. We need to have a more critical engagement with technology innovation.

The Circle is the 2015 common reading selection at SJSU, and activities include talks by faculty members in Psychology and Communication Studies. Maybe a student will be motivated to launch technorealism 2.0!

This week the news has been filed with reports about Ahmed Mohamed, a high school student arrested when his teacher mistook his home-made clock for a bomb.  Social media has been ablaze with the #IStandWithAhmed hashtag. Today the college student who started the hashtag is profiled in a USA Today article. She argues that the response to the hashtag shows the power of social media to give voice to the voiceless. Let’s hope that this will contribute to lasting social change to reduce the racism and Islamaphobia that the arrest illustrate.

Today I came across an example of how a Twitter post led to action, as Netflix changed its description of the movie Pochontas after a critical tweet. The author of the tweet concludes the article by noting, “sometimes I’m still amazed by the power of the internet.” Indeed!

A growing body of evidence demonstrates that behavioral science insights — research findings from fields such as behavioral economics and psychology about how people make decisions and act on them — can be used to design government policies to better serve the American people.

Economics and psychology are both in the SJSU College of Social Sciences, along with ten other disciplinary or interdisciplinary departments, so we’ll definitely answer the call of using behavioral sciences in service of the American people. As I discussed in a July post, the social sciences are important!

Yesterday was the 14th anniversary of the September 11, 2001 terrorists attacks in the United States. On that day I was in my third year as an Assistant Professor at the University of Minnesota. When the actual attacks happened I was having breakfast, but did not learn about them until I got to campus about an hour later. When I walked into Appleby Hall the first person who broke the news to me was a student, but I thought that he must have been misinformed, as the news sounded impossible. I walked to my office and said hello to my next door neighbor, who had her door open but was glued to her computer screen. She ignored me, which signaled that something really horrific was happening. After 10 minutes of unsuccessful attempts to connect to the websites of U.S. news providers, I was able to reach the BBC’s website, and spent the rest of the day checking news, and talking with colleagues, friends, and family.

About a month ago I asked my Associate Dean if the college did anything for 9/11 anniversaries, and was told that we do not. Next year will be the 15th anniversary of the attacks, so that may be a good time to start. Perhaps one event can be a screening and discussion of the film Divided We Fall: Americans in the Aftermath. One IMDb synopsis:

When a turbaned Sikh man is brutally murdered in the aftermath of September 11, 2001, a college student journeys across America to discover who counts as “one of us” in a world divided into “us” and “them.” Armed with only a camera, Valarie Kaur encounters hundreds of stories never before told — stories of fear and unspeakable loss, but also of resilience and hope — until she finally finds the heart of America, halfway around the world, in the words of a widow. Weaving expert analysis into a personal journey and cross-country road trip, the film confronts the forces dividing a nation.

I was just informed about the movie by a colleague, and it sounds powerful. I’ll have to check it out as the first step of thinking about a September 11, 2016 commemoration.

Today SJSU’s Associate Vice President for Marketing and Communications informed administrators about the latest phase in the SJSU brand initiative: a new set of banners that bear portraits of students, faculty members, and alumni have been placed on campus, and along one corridor the banners also spell out “SPARTANS.” The Associate Vice President notes:

The banners kicked off a storytelling campaign, “My Story is Here,” a statement of pride in being part of the SJSU community. This effort seeks to involve community members in the larger SJSU story — one of individual and collective grit, smarts, and imagination.

“My Story Is Here” also has an online presence, where the portraits and stories can be viewed. 15 profiles are in the launch, with many more expected to be added over the next few weeks. I’m happy that three of the 15 profiles feature College of Social Sciences folks: Mexican American Studies Professor Julia Curry, Psychology alumnus David Fales, and Behavioral Science/Anthropology alumnus Dylan Wondra. SJSU’s main brand is “Powering Silicon Valley,” but that goes beyond a focus on STEM fields. I look forward to seeing more social scientists being featured!

Next year I’ll have to organize a group photo of the SJSU College of Social Sciences Dean’s Office staff for an entry in the National College Colors Day Challenge. Perhaps we can all get shirts and hats like this: 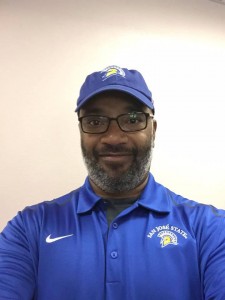