The Fractal Nature of the Gender Binary: Or Blue vs. Turquoise 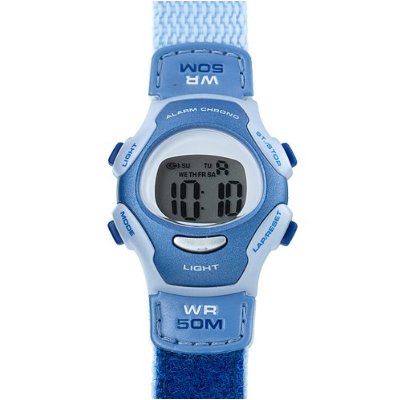 A reader named Judith B. wrote in confounded by the copy describing the watch pictured above. It began:

Don’t be fooled by the girly blue and white face on this multifunction Pro Spirit® digital sports watch. It’s more than a match for any tough guy’s watch…

The gender binary — that is, the rule that everything (oh animals, jobs, food, kleenex, housework, sound, games, deordorant, love and sex, candy, vitamins, etc) gets split into male and female — is fractal. That means that, for every male or female version of something (say sports versus dance), there is a further gendered split that can be made. If we take sports, we might divide it into the masculine football and the feminine swimming. If we take swimming, we could probably divide it down further. Take education (which is, arguably, feminized): we can split it into physical sciences (masculine) and social sciences (feminine). And we can split the physical sciences into biology (dominated these days by women) and physics (dominated by men). So the gender binary has a fractal character.

What does that mean for blue? Well, it means that, even though “blue” is socially constructed to be masculine, blue can be broken down into more and less masculine types of blue. Turquoise and light blue, for example, are often seen as more feminine that the primary color blue or royal/dark blue. The text, then, is referring to, literally, “girly blue.” Lots of ads aimed at women employ the feminine blues. These ads sent in by some of my former students are good examples:

Usually the use of a “girly blue” serves to balance masculinity and femininity.  It’s no accident that these ads are sports-related, or use copy such as “strong & beautiful” and “I totally have a soft side. You comfortable with that?”

So, that’s my explanation for “girly blue”: fractal gender binaries.

Football = masculine, ok I can accept that, but 'girly' swimming? Where in the name of bejapers did you come up with 'swimming' as a feminine sport? Swimming is, I would have thought, one of the few sports where men and women train together and where men and women are seen (ie - televised) equally participating in races. How does that make it 'girly'?

If you had given the example of, say aqua-aerobics or synchronised swimming as a feminine devision of swimming, and water polo as a masculinine one, then that would perhaps be more accurate. But swimming as a whole 'feminine'... no. I'm sorry but calling swimming girly really seems like a value-based judgement rather than examination of the facts... Just to pick nits. Otherwise an interesting post

[...] like that. This behavior actually reminded me of the recent Sociological Images post on the Fractal Nature of the Gender Binary. As Lisa Wade explains, Take education (which is, arguably, feminized): we can split it into [...]

Having been at UNC for just 5 years, I've been wondering about this. It seems that the official position is that there is no such thing as girly blue. Our color is NOT "baby blue," or "powder blue," but *Tarheel Blue*, which is very masculine (definitely not less masculine than Duke Blue). For girly girls, they sell pink stuff that somehow matches the baby blue UNC color. The whole thing is a little awkward - which is why we don't talk about it.

When I bought my bike, I was looking at women's mountain bikes. (Because they're built for a shorter person.) I was given two options: pink or turquoise blue. I went with turquoise. But I kind of wanted a red one.

I'm not so sure about the "girliness" of the blue in the underarmor ad. They use the same shade in both the men's and women's ads on their site.

This is hilarious and awesome

Could you explain what you mean that education is feminized?

Er..."more men would be suited to being physicists..."

Yes pastel = girly, and babyish. The genderisation of pastel colours as feminine is infantilising too.

Ugh! this frustrated me so in undergrad gender communications.

Not to mention that many (or most?) modern languages have masculine and feminine attributes built right in - - We are so ethnocentric that we assume neutral is better than masculine or feminine?

Also -and maybe this is a generational thing - but i am not sure if we should still assume that values of good or bad are automatically attached to masculine and feminine objects and attitudes... so what is it we are discussing?

Accepting things live on that continuum is accepting the natural world (by that I mean nature). I just don't understand the value of this thread of "liberalism" at all.

[...] a fair bit of Sociological Images already. However, they get a Quick Hit because their recent post The Fractal Nature of the Gender Binary: Or Blue vs. Turquoise continues on a theme I discussed in one of my earliest posts here, “Girl stuff” in Free [...]

mmmm....the bit about the bell curve and the iq tests....you said that women tend to cluster around the middle while men gravitate towards the ends? meaning that more women are average and more men are either really dumb or geniuses. i would like to point out that a large number of sociocultural factors come into play with iq tests and for this reason they are not an extremely valuable measure of intelligence. i would like to postulate that our society's norms and gender beliefs are such that women will learn to think of themselves as average and men will tend to either rebel (by refusing to learn how to think critically and analytically) or receive the preferential treatment that fosters this kind of intelligence. just putting it out there.

[...] I have dared peek into.  I’m going to reference Images again here, for a great post on the fractal nature of the binary, which explains how you can have things which appear to subvert this gender policing, [...]

[...] is gendered by the colour it is (olive green for boys, pale yellow for girls, for example; even blue clothing, for example, has a “girl” shade and a “boy” shade), and vice versa (and orange top, for example, will be marked as “girl” or [...]

[...] what’s wrong with having women staying in the “softer” fields of a tech startup? From my observations, engineers assert superiority over other fields, and can be [...]