Selling Vitamins, Selling the Idea of “Opposite Sexes”

(1) Notice the obnoxious invisibility of dad (my emphasis):

Did you know there are gender specific teen multivitamins to address the top health concerns of moms and teens?

This is annoying, of course, because it reproduces the idea that dads don’t care about or aren’t paying attention to their kids.  But it’s also kind of ridiculous because, as long as we’re going by stereotypes, if there’s one social group less concerned with health than men, it’s teenagers.

(2)  I will leave aside whether teenaged female and male bodies are so dramatically different that they need different vitamins and minerals (I am not convinced), and instead just point out that One-A-Day has gendered what vitamins are for.  Check out the first bullet point in the close-up (in case you can’t tell which is which, the “For Him” is in block letters with stripes across his torso and the “For Her” is in cursive with spirally curves): 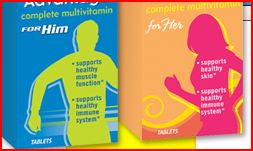 I especially like the "his" are endorsed by baseball, and "hers" support breast cancer awareness.

the vitamins “for her” have more calcium and iron

Post-menopausal women with long-term calcium deficiency have a greater risk of osteoporosis, but teenagers with a normal diet shouldn't be affected by it.

On the other hand, women with heavy periods can have iron deficiency anemia. I had it a few times in my teens. But then you just go to the doctor and take iron supplements for a month or two.

Not to mention that iron and calcium are antagonists -- you don't take them together, or they block the absorption of one another.

While high-quality vitamins in large doses (orthomolecular therapy) can be a life-saving health practice, these compressed pills with tiny amounts of synthetic vitamins can be useless or worse (and, if not chewed, they rarely even dissolve in the body).

A friend of mine owns a septic tank service (a recession-proof job!) that also rents portable toilets, and he told me that the one thing that consistently ended up being filtered out by the screen on the hose used to clean out the porta-potties were dozens of little vitamin pills that looked almost fresh out of the bottle. Most were "One-A-Day" brand, which are particularly durable.

Whatever happened to... food?

"Whatever happened to… food?"

Agreed. Though, to be fair, soils have been depleted so much over the last century that it is now almost impossible to get the minimum requirements of all vitamins and minerals in a typical western diet. Funny how the media and medical establishment keep claiming that North Americans are eating "too much" (despite questionable evidence for any link to disease), when virtually all of the leading causes of death (heart disease, stroke, cancer, diabetes, etc.) have a strong vitamin/mineral-deficiency component among their causal factors. We need to be encouraging people to eat more (high quality) food, not "reduce their calorie intake"!

Don't forget that only moms can care about their teens' nutrition. Dads couldn't care less!

I'm reminded of the time I was at the local gym, and a woman was assisting me in learning to use some strength-building equipment. She informed me that I "didn't want to" add any more than a certain amount of weight or do any more than a certain number of repetitions on one machine because it would build mass where I didn't want it - in my waist. I had a good time trying to get her to explain to me why that was. We went around and around with it - she would never come out and say that because I was a woman, "toning" rather than "building muscle" in specific areas was the socially acceptable goal, but that was clearly her issue, and the more I insisted that I *did* want to add the extra weight, the more flustered and angry she became.

Which leads me to add: how sad is it when 1) women perform the "gender police" function toward other women, and 2) that most women in the gym whom that trainer was likely to encounter most likely expected that bias: of being trained on the equipment in order to conform to these gender specific "fitness" goals? (So my trainer was, almost certainly, doing what she expected I *wanted* her to do?)

[...] lines and swirly pink ones is the only explanation for the epidemic of such symbolism (see here and here for [...]

well from what i've read, (can't remember the source, so you'll just have to take my word for it) the vast majority of the american population, both male and female, and of all ages, is iron deficient to some degree. jeeeeezzzz the vitamin people.

Oh God, that's actually weird. I'm pretty sure that it would be better if there were vitamins for teenagers in general, and they'd definitely be sold like hotcakes. For instance, nowadays, there are many supplements like https://www.cornbreadhemp.com/product/cbd-capsules-full-spectrum-hemp/ that are beneficial for both men and women. The only reasonable difference that I'd understand is if such vitamins were for people of different ages, but not sexes.

The cannabis plant contains over 200 terpenes. In addition to giving cannabis its flavor and aroma, terpenoids have many useful therapeutic effects. More information here https://cannaflower.com/complete-list-terpenes/

The cannabis plant contains over 200 terpenes. In addition to giving cannabis its flavor and aroma, terpenoids have many useful therapeutic effects. More information here https://cannaflower.com/complete-list-terpenes/

As far as I know, many people do not know anything about one of the most popular ways to relax muscles and emotionally rest. I mean three varieties of CBG used for sleep problems and constant workload, and you can look at these types on this site https://www.neurogan.com/cbd-products/snacks/cbg-gummies/. If you understand that you need funds for recovery, you have the opportunity to use this site.

As far as I know, many people do not know anything about one of the most popular ways to relax muscles and emotionally rest. I mean three varieties of CBG used for sleep problems and constant workload, and you can look at these types on this site https://www.neurogan.com/cbd-products/snacks/cbg-gummies/. If you understand that you need funds for recovery, you have the opportunity to use this site.

As far as I know, you are looking for a food supplement for your pet. I am ready to share this site with you https://www.westcoastsupply.green where can you order a medicine that will help your dog feel better and live a full life. This will probably be useful to you, because I also used this resource.