In a comment a while back, Elena pointed out that Diego Velázquez’s painting “Infante Felipe Próspero” (from 1659) provides a good example of how pink was acceptable for males to wear…as were, in some cases, dresses, which the young prince is wearing: 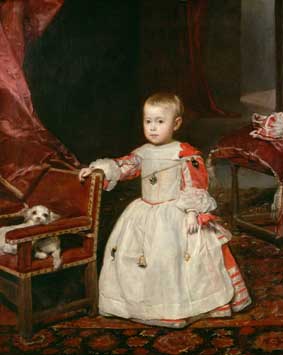 …until the late 1700s little boys would wear dresses or petticoats for as long as they could until they could dress as miniature adults…This was mainly for ease of bodily functions.

Of course, today most parents would be appalled at the idea of dressing toddler boys in dresses–dresses with frills and ribbons, at that. 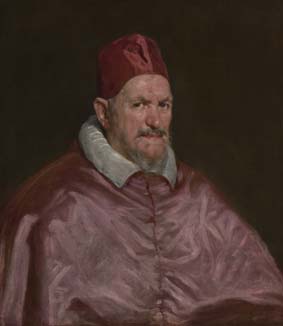 Both images found at the National Gallery’s Velázquez page.

You might also check out Kent State University Museum’s Centuries of Childhood exhibit for examples of how children’s clothing has changed over time.

Thanks for the tip, Elena!

My family has picture of my Dad taken c. 1931 (when he was about two years old) in a ankle-length dress, trimmed in lace, with curls down to his shoulders.

Dresses (and long hair) for male infants and toddlers were common in the West up until WWII. And let's not forget short pants -- most boys never wore a pair of trousers until they were at least 13 years old. A pair of shorts may not seem significant to us, but they were fraught with meaning in the early 20th c.

And a nice detail on the prince's portrait is the number of talismans hanging from his dress, I see a mano fica and a cornicello at least.

Kids (especially kids in the royalty, who had their own genetic problems due to heavy inbreeding -- and the Habsburgs were the posterpeople for that) had horrific mortality rates in that time: Felipe Próspero died at 4 years old. His father, Phillip IV, had 12 legitimate children, but only three of them lived to adulthood, four if you count prince Baltasar Carlos, who died at 16. No wonder parents loaded them with protective charms.

There has always been a contrast in the fashion norms between the working man and the historic nobility. Even today, look at trendy young New Yorkers with man capris vs. farm hands in South Dakota. More than anything else having to due with structure of the garment, we just associate fancy with feminine.

[...] Though they strive to cover all aspects of society, their section on gender traces the history of pink, asks us if teddy bears can be considered manly, and shows us what happens when boys play double [...]

Young males in dresses/skirts---first a comment had it that it ended circa late 18th century; next comes remark it extended to 1931; actually, as time went on, the skirt age for both sexes became progressively the skirt age for females only (except in multitude of National Geographic pictorials spanning over a century---Polynesia; Greece; Bhutan; et al). Social forces cause almost all clothing behavior, except for extremes of climate (irrationally, men wear 3 piece suits and ties in summer heat). Rome ejected men in pants in 393AD. It was politically subversive, as the empire lost the Battle of Adrianople 15 years before to trousered cavalrymen. And there we have it! Men don't wear pants "because male chromosomes determine it;" pants are equestrian; the horse was for long centuries the best transportation; far more men than women rode; men renounced skirts for trousers; women retained skirts; finally, factory work in WW2 placed over 22 million women in Allied nations into pants. Social forces---not "brain chemistry"---cause clothing behavior. The "heretical" yet inescapable fact---skirts are "sex neutral."