Both Cole S. and Toban B. found this Nestle’s candy bar (Cole saw it at World Market): 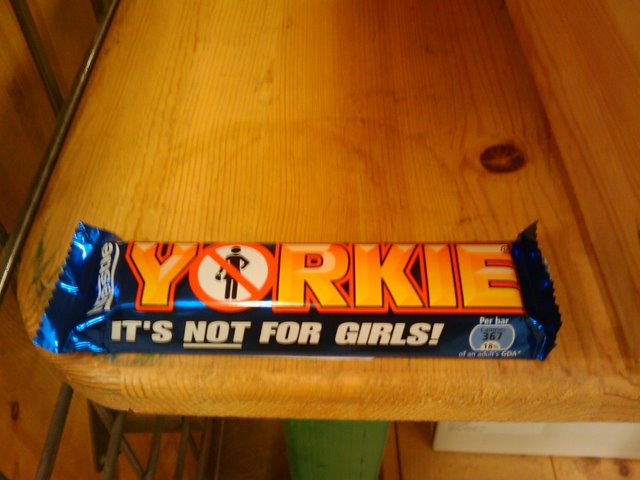 The Yorkie website was down (the error message said for routine maintenance) when I tried it, but Toban managed to snag some quotes from it earlier that indicate how the bar is being marketed to men. The bar is described as “a big, solid, chunky eat, uniquely for men,” and the site goes on:

Yorkie is positioning itself as a chocolate bar for men who need a satisfying hunger buster. With five solid chunks of chocolate, it’s a man sized eat…

[Earlier] advertising reflected this with macho imagery – lorry drivers who take it one chunk at a time…
Yorkie still holds these values today but was relaunched in 1994 as a hunger satisfying bar.

It’s similar to the way that Hungry Man frozen dinners are marketed: the association with working-class male appetites, which presumably require big, “solid” meals to satisfy them after their hard days of work. Clearly any candy bar this serious isn’t appropriate for women. Oh, excuse me…not a candy bar, a hunger-satisfying bar. Women eat chocolate for emotional reasons or to bask in the luxury of the taste; men eat chocolate just to fill their stomachs. Notice that the advertising doesn’t focus on the types of things we generally see in Dove or Hershey’s ads for chocolate bars: the chocolate being rich, smooth, delicious, etc., which imply that eating chocolate is an indulgence rather than just a practical way to satisfy your hunger.

Also, in our comments Trevor pointed us to a conversation about a pink version of the Yorkie.  I am completely perplexed.  Along the top it says “VERY LIMITED EDITION.”  Along the bottom is says “5 HUNKY CHUNKS OF MILK CHOCOLATE.”  Along the top, diagnolly, it reads: “GET YOUR LIPS AROUND THIS!”

So is it a girl version?  I can’t tell.  The female figure is still crossed-out with the “no” symbol.  I don’t know what pink thing she is holding.  I am perplexed. 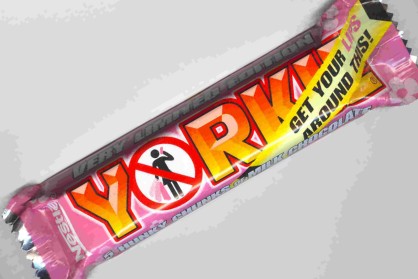 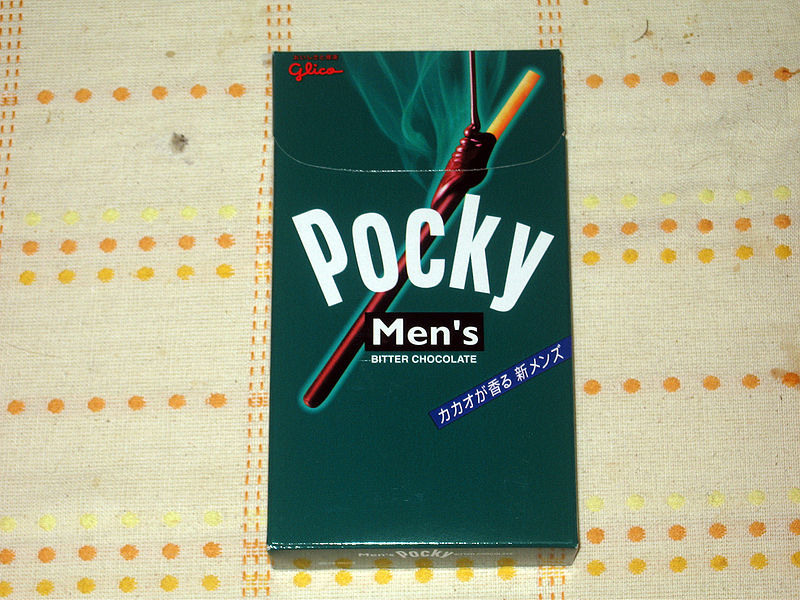 Candy, like other high-sugar products, are often gendered female.  Perhaps that’s why this candy marketing is making such a big point of making candy manly?  Notice that the Men’s Pocky is “bitter,” i.e., not too sweet.  That seems to be happening a lot these days, as in the new Snickers and Twix marketing, see here, here, here, and here.

NEW! Keely W. sent in a commercial for Mars’ new candy bar aimed at women, Fling (found here).  The message: You shouldn’t (sexually) indulge a lot, but you can (sexually) indulge just a little… with the help of Mars Co., of course.

There is apparently a version of Yorkie that girls are allowed to eat, and the wrapper alludes to what every girl loves: a) buying shoes, and b) (possibly) oral sex with a man!

The pink yorkies do seem quite sexual and condescending -- I can't believe they're actually on the market. Even more interesting, the logo stays exactly the same for both male and female versions, complete with the slash over the woman replacing the "O." So not only are women completely sexualized, objectified, and trivialized, but their very existence is consequently negated. Wow.

The Yorkie has been around for over 30 years and its advertising campaigns have always pitched it as a chocolate bar (the only chocolate bar?) for men, especially for lorry drivers.

The 'it's not for girls' campaign has been controversial since it was launched in 2001. http://www.guardian.co.uk/media/2002/mar/27/advertising.marketingandpr

You know what I always thought was sexist? That Peanuts comic where Patty and Violet convince Charlie Brown to build them a clubhouse by giving him a false hope of social inclusion. Then, once he has performed the manual labor which clearly is only befitting for a man to do, they kick him out and put a "No Boys Allowed" sign on the door. I can't believe something so sexist was published in a children's comic.

Jesus, you people are unbelievable.

My (female) roommate found that in a store a while back, and instead of being offended, she was curious to see what would make it be "not for girls". She bought it and said "Mmm, chocolate." She said she felt manly.

My female friend bought one for me (also female) recently, and we both found it amusing, though an interesting example of how sexism is tolerated in the public/commercial sphere in a way that some types of prejudice would not be (ie., no "not for blacks" chocolate bars).

You know what? My first inclination is to put on my girliest pink tutu, pearls, tiara, and strappy sandals, and eat one while getting a mani-pedi, just to be contrary. But that presents two roadblocks: I don't ever get manicures, and also I don't want to put money in their pockets.

It's amazing, how defensive Yorkie seems to feel about reinforcing the masculinity of its customers. I mean, vehemently defensive. It's NOT for girls. This is MANLY chocolate. Never fear - you will NOT be mistaken for one of those weak, feeble-minded girlies. Hur hur hur. Strict enforcement of gender binaries is all that's separating US from THEM. Fellas: chow down, as if your very identity depended on it!

in the U.K army they change the 'not for girls' to, 'not for civies' (civilians)...
i thought a nice twist

I saw those for the first time not too long ago, and said to my English boyfriend, "I saw these weird things in the Bulk Barn today! I can't remember what they were called, but they were like...Misogyny Bars! Seriously!" He knew what I was talking about.

See, going to school in England, I've always thought of Yorkie as having a brilliant marketing scheme. It plays off of gender defensiveness. Do they really care if women eat their chocolate? No, they want them to! So they have a slogan that encourages men to eat them for being defined in opposition to women, and for women to buy them as an act of protest against the very same slogan! Corporations only exploit gender inequality if it stands to make them some money, even if it's by reverse psychology.

I came across these in a confectionery import shop, and had the same misogyny chocolate! wtf! reaction.

Then I bought some for a couple of my gay male friends, so they could enjoy chocolate untainted by girl cooties.

I think the marketers basically were trying to position these chocolate bars in a food category that also would include beer and red meat.

"I don’t know what pink thing she is holding. I am perplexed."

it looks like she's holding several shopping bags in one hand and a cell phone in the other. just a guess.

man... i wish i had a snickers. (ever tried one dipped in peanut butter? they're amazing! @_@)

Some of these comments are unbelievable. Imagine being offended, haha! Ever thought its maybe just a funny advertising campaign to sell chocolate? I belive its called irony.

Here's a comment (over on the Feministe blog) about my own personal encounter with Yorkie bars -
http://www.feministe.us/blog/archives/2009/05/18/because-regular-chocolate-bars-are-way-too-masculine/comment-page-2/#comment-242876
(Basically, I bought one of them, and I photographed it, and I tasted it -- during a visit to the UK. The comment was posted months ago, but I've decided to share it, anyway.)

Since then -- over the past week --
I have noticed that two flavours of Yorkie bars are sold at a "British Shoppe" here in London, Ontario.

[...] also this post on efforts to market chocolate to men. 3 Comments Tags: food, gender, nation: Ireland What Course Do Women Like at School? [...]

Men's Pocky comes with pictures of women in it. Which seems a bit backward--

[...] everything (oh animals, jobs, food, kleenex, housework, sound, games, deordorant, love and sex, candy, vitamins, etc) gets split into male and female–is fractal. That means that, for every male [...]

Well, I for one have never let the picture of the woman crossed out keep me from buying Yorkies when I'm in England (I have yet to see them sold in my area, either through blindness or lack of availability) and I think they're a riot. I consider them to be a joke. My sister and I usually have a good laugh over the labels (such as one that said, "Do not feed to birds" and another that said, "Not meant for a purse.)

..... These things all just make me laugh. Maybe I'm weird, but I've always considered it to be a marketing thing. I'm not offended in the slightest.

It's a joke... to all hardcore feminists in here. It's especially funny to think, how some ladies in here get all upset, while (of course) it would be all right to put a crossed out man on some chocolate bar. That's funny, right? Please ladies, stop applying double standards — the 80s are long over, get real!

Pretty sure a yorkie bar has a ridiculously high fat content.....like, 90% of your daily value. Don't know how thats legal, but regardless: ew.

I used to eat Yorkie bars as a kid. They launched this weirdly-gendered campaign while I was at school. For a while I kept eating them out of baby-feminist defiance but then decided that buying their product wasn't the best way to show 'em. I did quite like the chocolate, but hey. These days I'm boycotting Nestle ANYWAY.