Stephanie DeH., Cara McC., and our intern, Lauren McGuire, sent in this CPR certification campaign that embraces the idea that sex sells.  I initially added it to our post on using sex to sell unlikely things (e.g., organ donation and sea monkeys), but I changed my mind and decided it deserved its own discussion.

What was interesting to me about this example is the sexualization of the possibility of dying. The fact that a person might die is apparently not serious enough to make it unsexy.  It actually took me a minute to even notice the weirdness of sexualizing the risk of death.  After I noticed I thought “How crazy!”  But then I thought again: in a society that regularly sexualizes violence and murder, the sexualization of near-death is par for the course (which, of course, is why it didn’t strike me as particularly weird in the first place.

NSFW and possibly triggering, so images are after the jump: 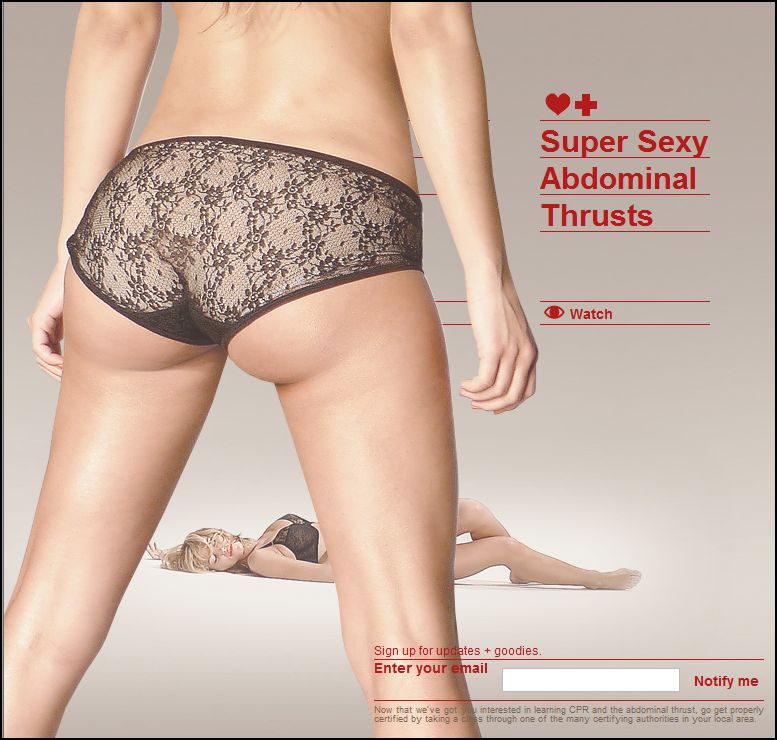 The text at the bottom reads:

Now that we’ve got you interested in learning CPR and the abdominal thrust, go get properly certified by taking a class through one of the many certifying authorities in your local area.

Notice too that the “sex” being used to sell in this case is girl-on-girl. They also have a guy-on-girl theme, but I didn’t see any guy-on-guy CPR, maybe because it would be threatening to straight men (whereas straight women better tolerate lesbianism for reasons I won’t get into here).

Whether it makes it better or worse, this campaign is using CPR to sell sex (-y lingerie). The company in question.

having followed all the links, I think that what we have here is a lingerie company using life saving techniques as an excuse to engage in simulated sex to sell lingerie and with the hope that instead of being castagated for going over the edge sexually to instead by patted on the back for doing pro-bono advertising for life saving techniques.

This makes me feel sick. Learning to save a life is a serious skill, and anyone who has been in the unfortunate position of having to try to resuscitate/keep someone alive until help arrives will tell you it is terrifying, brutally tiring, and anything but sexy.

This company should be ashamed of itself.

I'm so glad everyone else noticed that it's really more of a lingerie commercial, whose name is particularly dominant after the end of the girl-on-girl version of the ad. Talk about a doozy of an ad to unpack!

As always, thanks for the great critiques!

The worst part about this--for those of us who ARE trained in CPR--is that so many people are so skittish about treating a woman correctly when trying to keep circulation going, because of the issue of having to disrobe a female patient adequately. And, newsflash, more than likely your patient isn't going to be a hot 20-something lingerie model. It'll probably be your elderly neighbor woman.

MAJOR TIP: Move the breast out of the way BEFORE you apply the defibrillator patch on the lower left side of the chest. The current has less tissue to go through and you'll be more likely to get a good shock right next to the ribcage, which will be better for reestablishing a good heart rhythm.

Anyone notice that being a sexy ad it has made sluts out of blonds and makes black men appear as if they always think of sex.

On another note subliminal ads use sexy and death for alcohol and smoking. So it is strange that they need to use sex to sell near death

Oh yeah, and real CPR = not sexy at all. The patient usually vomits when you're done, if it's successful at all. I've witnessed this several times.

The PT does not "usually vomit". You're not holding the correct airway position and filling their abdomen with air if that is the case.

Being someone who performs CPR on people at least monthly I am appalled and sickened by this. It is a traumatic and often horrifying experience for most citizens to perform or even witness. This video makes a mockery of the entire process.

selling lingerie to women... by making ads for men.
wat.

Isn't it great that they are encouraging men to learn CPR in the hopes they can get a quick feel and a couple of grinds in before the obstruction leaves her airway? Not. These ads are wrong on so many levels. Unfortunately the company doesn't have any contact information to leave complaints. How convenient.

History of Madness in Canada...

I found your entry interesting thus I've added a Trackback to it on my weblog :)...

I found your entry interesting thus I've added a Trackback to it on my weblog :)...

The mildly ironic thing about it is that they really do show good technique, unlike the depiction in most TV shows and movies where people are being taught the exact wrong things to do.